3 people have locked themselves inside the castle for Palestine support 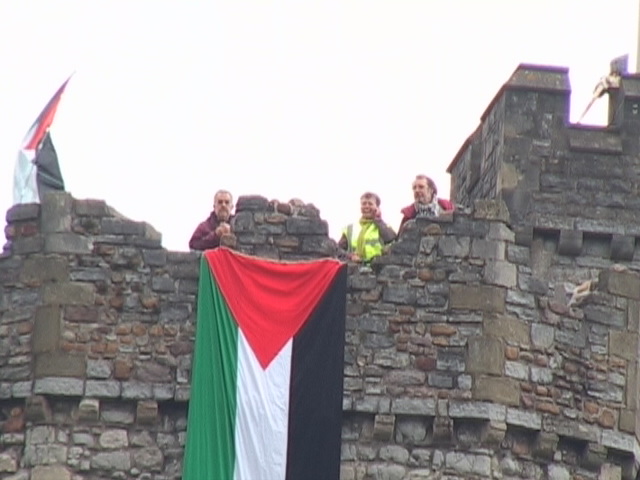 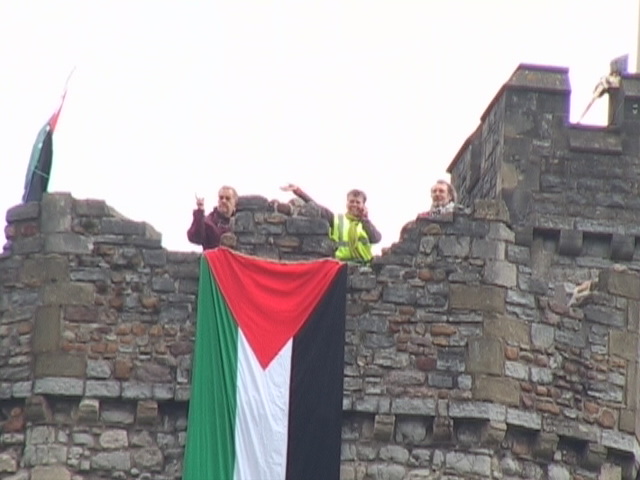 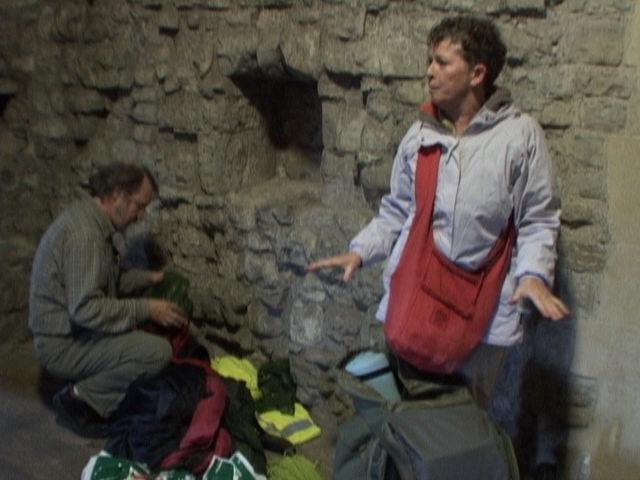 The three got into the keep after buying a ticket for a castle tour and used a bar to block the entrance.

Dee Murphy, Bob Cotterill and Keith Ross said they plan to stay for a while, possibly days, and have stressed they have no wish to damage the castle.

A negotiator from South Wales Police is at the scene.

The protesters said the action was to make the point about the occupation of land in Palestine which they claimed was being ignored by the public and the media.

They are flying a Palestinian flag from the keep and have hung another over the wall.


We acknowledge the right to peaceful protest, but it must be noted that this is a valuable ancient monument and of considerable public interest
Chief Supt Bob Evans

They told BBC Wales they had some food and water with them and may stay for some days.

However he continued: "In the interest of public safety we have advised the castle to exclude the general public from the area.

"We acknowledge the right to peaceful protest, but it must be noted that this is a valuable ancient monument and of considerable public interest.

"We believe at this stage that those involved in the demonstration are members of a local anti-war activist group."

Peace activist Helen Williams, a former human shield in Iraq, was handing out leaflets outside the castle with her Iraqi husband Wejdy Easah to explain the purpose of the protest to the public.

She said the protesters were planning to stay 24 hours, adding: "It's a symbolic gesture occupying the keep of Cardiff Castle.

"We want to bring to the public's attention the plight of the Palestinians, what they are going through.

"It's a perfectly peaceful protest. It's all non-violent."

A spokesman for Cardiff County Council said: "There has been an incident at Cardiff Castle which police have attended.

"Several protestors have barricaded themselves into the top of the castle's keep area and are refusing to leave.

"On the advice of the police, the castle was closed to the public at 13.30 and officers are currently negotiating with the protesters to come down."


Cardiff Castle, a potent symbol of occupations in Wales since the time of the Romans, is itself being peacefully occupied by a group of concerned citizens in solidarity with the people of Palestine.

This action is to remind people:

That the Palestinian tragedy goes on.
*

That Palestine is still being illegally occupied by the Israeli State after almost 40 years.
*

That Israel continues to build the “Apartheid Wall” in direct contravention of UN General Assembly Resolution ES-10/13 which called upon Israel to “stop and reverse the construction of the wall in the Occupied Palestinian Territory”.

We are calling on Peter Hain, Secretary of State for Wales to stand out against the Apartheid regime in Israel in the same way that he stood out against Apartheid in South Africa

Write to Peter Hain at his Constituency Office:

Or e-mail him at:

And write to your AM and MEP

FREEDOM AND JUSTICE FOR PALESTINE

Israel has now withdrawn from Lebanon and the eyes of the world's media have turned elsewhere, but the people of Palestine continue to suffer.

In the last month over 200 Palestinians have been killed or seriously injured as a result of Israeli military action within the Palestinian Territory.

Early on the morning of Wednesday 8th November, Israel launched a barrage of shells on a residential area in Beit Hanun, killing at least 19 Palestinian civilians, including eight children and four women, and wounding over 40.

Even before this latest atrocity, Israel had killed over 63 Palestinians in the Gaza Strip in just a week.

There are over 4 million Palestinian refugees registered with the UN
*

FREEDOM AND JUSTICE FOR PALESTINE

The whole point of this was to garner media attention....

...well apart from the BBC Wales site this is only the other site I can find with reportage...

....he makes a good point. I would at that three people locked in Cardiff Castle is hardly high profile. Compare it too the coverage that Fathers for Justice got when they clung to the side of the Law Courts (which was conveniently next to the Western Mail offices)......

It would certainly garner national media coverage if others took the initiative and did the same (or similar activity) in other parts of the country.

"It would certainly garner national media coverage if others took the initiative and did the same (or similar activity) in other parts of the country."

....but they didn't did they. This was 3 people locking themselves in Cardiff Castle. It's quite obvious if more people did it then it would garner more media coverage but then you could say that about anything, that isn't the point. The point is, in isolation (and this was an relatively isolated event) these types of protest are pretty ineffective. BBC Wales have covered it for 5 seconds. Local press? A couple of paragraphs. Impression on the general populace? A big fat zero.

...in the Western Mail. A tiny puff piece in the top left hand corner. The other stories on the page are a Welsh sporting auction, Red Kites, council allowances and a council chief executive has gone on maternity leave.

One can only wonder how the South Wales Echo will cover the story. Perhaps they might put it on the same page as Mrs. Jones cat being stuck up a tree.