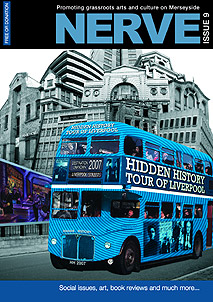 Next year we'll all be celebrating eight hundred years of Liverpool. It had been there before 1207 of course, but it was then that King John officially recognised it because he needed a short crossing point for the Irish Sea. And over those eight hundred years, Liverpool has grown from being a tiny hamlet to being an international city with a population of nearly half a million. What happened in between?

Well there was slavery of course, which apparently ended when some kindly rich white men realised that it was a nasty and degrading thing after all. Then there were those 'four lads who shook the world' with their music. Now of course there's Coleen McLoughlin and Derek Acorah. So are these the people who made Liverpool what it is today? Partly. But then there's the rest of us. The great untold story.

Yes, Liverpool's hidden history is the main theme of Nerve 9. As you will see over the next 32 pages, the so-called 'ordinary' people are the ones who have made the biggest contributions. Did you know Liverpool has been brought to a standstill by strike action on three separate occasions? Well you do now. Read all about it on page four. Did you know that Merseysiders were fighting fascism long before Winston Churchill made his famous speeches? Turn to page six. How did football start in the city? You don't know? Then you need to be reading page ten. And there's loads more where that came from!

In the present tense, we actually stand pretty much alone in promoting local arts in what will officially (there's that word again) be the European Capital of Culture in just fifteen months! We have artist profiles as usual, plus a new music section that showcases Mersey music for your gigging or downloading pleasure.

Nerve 9 is available for free in News From Nowhere, as well as all local cultural venues, cafes and libraries. This articles can also be read online at http://www.catalystmedia.org.uk/issues/nerve_latest_index.htm.