A new maximum security immigration detention complex under construction on Christmas Island, has been dubbed "Australia's Guantanamo Bay". Australia's new remote offshore detention centre will have cameras in bedrooms, electric fences and electronically controlled doors - to force centre-wide lock-downs. The level of security and surveillance, greater than at any existing detention centre, makes parts of the complex comparable to a maximum security prison. 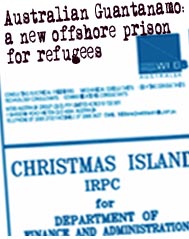 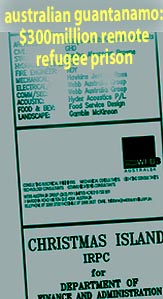 In March 2002 the Howard Government announced the construction of a new Immigration detention centre on Christmas Island. The successful tenderer, Baulderstone Hornibrook, was awarded the project's main contract for $207.9 million. The project is near completion.

Christmas Island, a small dot in the Indian Ocean about 24 kilometres long and 7ks wide, is where a new 1200 person detention centre is being built to detain refugees. The Government says the high-tech enclosure is a "deterrent to smugglers and illegal entrants, and useful for contingencies."

The perimeter is guarded by cameras, lights and an electrified outer fence. There are isolation rooms similar to the type in which Cornelia Rau was held in the Baxter detention centre in South Australia. And there are many specialised interview rooms, with reinforced glass separating detainees from staff.

Christmas Island lies about 500 kilometres south of Jakarta, and the new prison is in an isolated area of national park near the western tip of the island, surrounded by cliffs. The centre, which is due for completion within months, has received bipartisan support from the Government and the Opposition.

Refugee groups and the Greens and Democrats have attacked the centre as inhumane. The Greens senator Kerry Nettle, who has visited the site, said it was "callous and cruel to treat people in that way. The international community has rejected Guantanamo Bay, so why should we build one here?" Senator Nettle said.

John Gibson, the president of the Refugee Council of Australia, said the camp "sounds like Alcatraz... It is very disappointing, because people who will be held there have committed no crime under Australian law. All the reports show the conditions in detention have a significant detrimental effect on people's physical and psychological health."

Serious environmental concerns with the selection of this site have also been raised, not least of which was the selection process itself, the Howard government's self-exemption from environmental scrutiny normally required under the EPBC Act, and its commitment to "best practice" environmental measures during construction of the detention centre.

Within days of the original announcement for the construction of the detention centre, then minister responsible for the development, Wilson Tuckey sent a bulldozer into the rehabilitation area to begin clearing lines of sight for the surveyors. Without any authorisation from Environment Australia (EA), the bulldozer cleared a wide track straight through the middle of a block of advanced rehabilitation forest - planted some years earlier by EA.

The Christmas Island detention centre is part of the Australian government's Pacific Solution. It has been extimated that the federal government is spending over AU$300 million to build the new 800 bed (with a capacity for 1200) detention centre on the remote island.

Australian Greens Senator Kerry Nettle called on Amanda Vanstone the Immigration Minister in April 2005, to explain the government's plans for Christmas Island detention centre - following reports that all Australia's immigration detainees will be held on the island.

There are plans to shift all detainees to the island, according to the Shire President of Christmas Island, who says that all future unauthorised boat arrivals will be detained there.

Christmas Island's Shire President, Gordon Thompson, says residents are worried about the effects the controversial detention centre development will have on the island's tourism industry.

"We're not building tourism based on a prison tour," he said, also voicing fears that residents would be barred from areas on the northwest point of the island. He said locals were confused and did not know if the centre would just be used for refugees or as a Guantanamo-style prison. Another resident complained that access to popular fishing and snorkelling spots on the island would be limited.

Azmi Yon, president of the island's Malay association, has lived for 37 years on the island and wants the federal Government to leave it alone. He said locals were confused and did not know if the new centre would just be used for refugees or as a Guantanamo-style prison. "We need something from them in black and white to say what it is," he said. "Tell us something, don't keep us in the dark."

Mr Yon said the island was home to a harmonious group of Chinese, Malays and Europeans who respected each other's cultures. "Why disturb an isolated and unique environment when you can (build the centre) somewhere else?" he said.