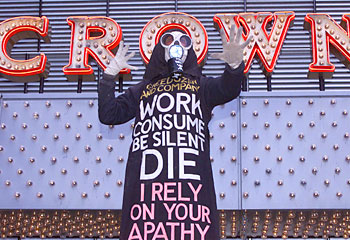 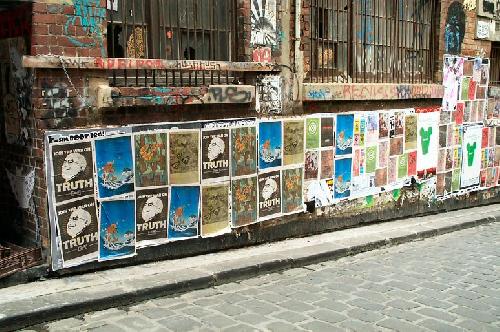 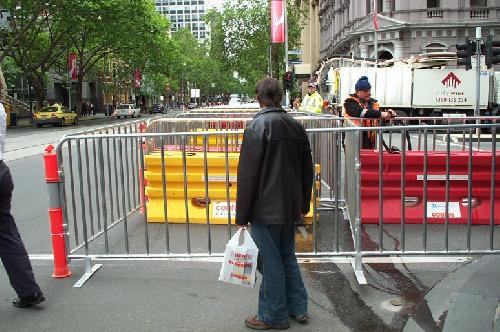 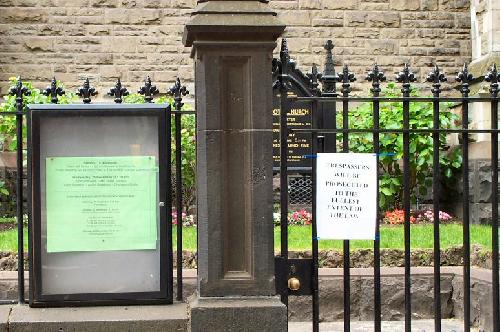 AUSTRALIA: MELB: Luther Blisset via samToday activists against the G20 took direct action against organisations assisting and profiting from war.

An annonymous spokesperson for the group said:

“The wars in Iraq and Afghanistan, the occupations of islands in the Pacific region, along with the countless other low-intensity wars around the world are being waged to secure the economic order being discussed at the G20.”

“600,000 have been killed in the Iraq war alone, while that countries resources have been turned over to Western corporations.”

“Pacific Island economies have been devastated by enforced degregulation and privatisation – and rather than sending aid for essential services, the Australian military is there to keep people impoverished by these reforms in line.”

Today over a hundred activists occupied offices, disrupted business and spoke out against notorious war mongers and profiteers.

Australian Defense Force Recruiters - Offices were occupied, and we forced an evacuation of all staff, disrupting recruitment.

Parsons Worley – An Australian company with billion dollar contracts in Iraqi Oil. Their offices were occupied.

Kellog Brown and Root/Halliburton – US based company linked to Dick Cheney, major war profiteer, embroilled in scandal surrounding embezzlement of millions of dollars of public money.

Violia/Connex – Melbourne train operator who is assisting the Israeli state build an Apartheid railway system, running through Palestinian land, servicing illegal settlements. The public were informed of their activities.

Tenex - a defence manufacturer making profits from Weaponry used for slaughter by the Australian and other armies. Their business was disrupted.

Yarra trams - owned by transfield corporation who manufacture and supply equipment to the Ausyralian, US, Israeli and Indonesia millitaries. We encouraged the public to fare evade in protest against their activities.Those who own Yarra trams profit directly from war and state terror. Bbuying a ticket helps them do it.

ANZ – Profiting from involvement in the “Iraqi Trade Bank”, which has facilitated the mass privatisation of Iraq’s resources and essential services, leaving millions without water, electricity or employment.

Tomorrow we take our opposition directly to the G20 meeting. Those profiteering from war and poverty must be disrupted and stopped.

After the protests at Tenex and Australian Army recruitment offices people moved through the central business district and held actions at more than 5 ANZ bank branch locations. All ANZ branches in the city have now been closed. Notices stating that “This ANZ bank has been closed due to G20” have been posted in ANZ lobbies. While the actions described in “G20 Actions, Friday Morning” were taking place other people were simultaneously targeting KBR and other war profiteers in the vicinity.

ANZ was targeted because they have been granted a role by the occupying powers restructuring the Iraqi finance sector through the creation of the Iraqi Trade Bank. This institution is presented by the occupying powers as necessary for the rebuilding of a stable Iraqi economy. However, this institution (like all others imposed by the occupation forces) serves the interests of the western powers who are responsible for the deaths of over 500,000 Iraqi civilians since the latest invasion.

The Iraqi Trade Bank serves as a lever for the economic colonization of Iraq by foreign multinational corporations to directly profit from the exploitation of Iraq’s human and natural resources. The Iraqi market has been flooded with cheap western commodities, and much of Iraqi industry and infrastructure has been sold to western corporations eager to make a profit from the illegal occupation.

ANZ is directly making profit from the misery of the Iraqi people through their role in the US economic exploitation of the country.

What exactly is the G20? Why should we stop it?

Become the Media at G20

Call all for G20 band practice

One hundred thousand protestors to riot in Melbourne!

Online Protest - Disrupt the G20 from your PC