Close to one hundred protesters occupied Oricas chemical services department in Melbourne early this afternoon. The protesters gathered due to concerns over Oricas track record s in transportation blunders of dangerous chemicals and their involvement with the Barricks, Lake Cowal Gold Project. 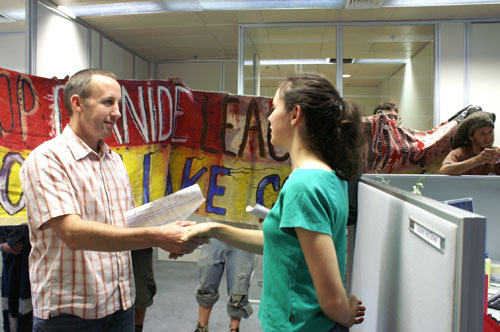 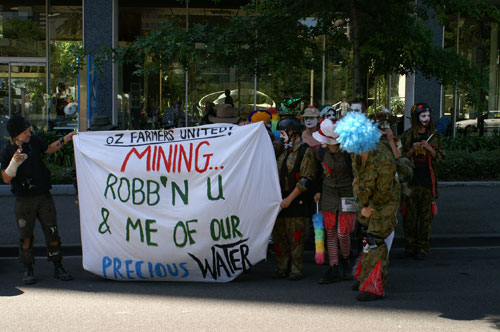 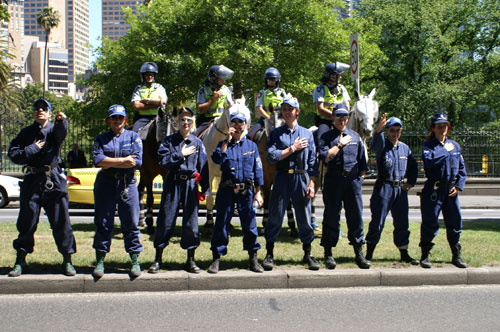 Close to one hundred protesters occupied Oricas chemical services department in Melbourne early this afternoon. The protesters gathered due to concerns over Oricas track record s in transportation blunders of dangerous chemicals and their involvement with the Barricks, Lake Cowal Gold Project.

Orica, a chemical production company, supplies Barrick Golds contentious Lake Cowal Gold Project, in Central West NSW, with 6,000 tones of cyanide a year. The Cyanide is transported from Old to NSW covering over 200 towns, 10 National Parks and over 20 rivers, all at risk to a cyanide spill.

Cyanide is a deadly chemical, used in the gas chambers of the Second World War, and has caused havoc in water systems across the world, in over 30 spills in the last 5 years. A solution of 2% cyanide can kill an adult human, whether ingested or absorbed through the skin. There are over 100 forms of cyanide, some of the break down chemical just as toxic as the original form.

When police arrived at Oricas 10th floor, protesters began negotiations for a peaceful resolution to the action. Protesters handed over a document to a staff member of Orica who was directed to pass it on to Chris Avramopoulos, Oricas General Manager for mining chemicals, and was then further directed to fax the document to all of the communities along the cyanide transport route to Lake Cowal.

By Barricks own admissions cyanide will be leached in the water table beneath Lake Cowal and will be present for up to 50 years. There are two tailings dams at the Lake Cowal Gold Project which will store waste cyanide, these tailings dams are unlined, and exist in an area once known as an inland sea, experiencing 20 year cycles of flooding.

On the 27th of November 20 walkers arrived at Lake Cowal, after walking from Brisbane through the communities on the transport route. The walkers have come to Melbourne to
Extend their awareness raising campaign on the dangers of Cyanide and the threats to ecosystems such as Lake Cowal.

In the last month Orica, a chemical production company, had half a tone of ammonium nitrate go missing from a train heading from Oricas Cooragang Island plant to a mine in Kalgoorlie. This highlights the risks of transportation of deadly chemicals.


Protesters demanded that Orica;
Cease all contracts with Barricks Lake Cowal Gold Project
Stop all production of dangerous chemicals… failing that,
Engage in public consultation with the communities, emergency services and councils along the transport route to Lake Cowal
Review all safety procedures after the recent hijacking of ammonium nitrate