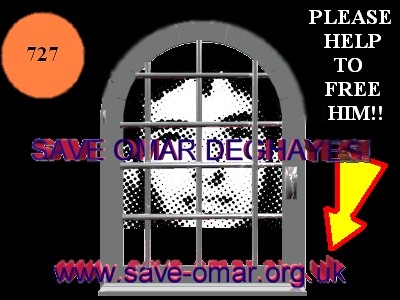 Prisoner in the war on liberty

This is a FREE confrence with films and guest speakers doing talks :

Craig Murray (ex-Ambassador to Uzbekhistan and author of; "Murder in Samarkand" subject of a hollywood film)

Milan Rai, author of "War Plan Iraq" and "Regime Unchanged"
and is the co-founder of 'Justice not Vengeance'he also has a new book.

There will be free information packs available and light refreshments.

( in extremis : in great difficulty (he is suffering and has suffered)[pocket Oxford 1996] )

Omar Deghayes, a man in his 30's,
married, with a young son who has not seen his father
for many years due to his incarceration.

A resident who lived in Brighton for twenty years, He fled Libya
with his family after his father was murdered (he was a trade unionist
who opposed the Gaddifi regime.) Omar attended school in Brighton and studied Law in University with the aim to become a legal professional specialising in human rights Law.

How it happened:
In 2001,
Omar went travelling in Malasia, Pakistan and Afganistan,
where he married. When Afganistan was invaded, he went to Pakistan,
thinking he would be safer there.He intended to return to his home in England to safety, warmth and comfort with his wife and boy baby,
to continue in his intended career in Law. This is where things turned
sour as he was arrested in Lahore, held be the Pakistani authorities for
the United States government of George W Bush for the war on Terror.
He was seperated from his family and transported to Afganistan, held at the Bagram Air Base and in September 2002 forcibly removed to Guantanamo bay Base in Cuba against his consent and will. Omar has been there ever since,
he has been (his lawyer says) tortured in violation of his human rights,
and hasn't yet been tried by a jury or any sort of trial whatsoever, so is classed as a detainee, but in reality is a prisoner who has commited no crime against the United states, that is why he is not being kept in the USA where he would have his rights respected.

More information about the Save Omar Deghayes Conference:

The Conference (which is FREE) includes:

* Reknowned speakers and legal experts providing a detailed analyisis of
the case of Omar Deghayes including the issues it raises and its implications.

* Personal testimonies from his family.

* Exclusive preview of two forthcoming films about Omar:
One by a local independent film maker and the other which is
due for release on the mainstream TV in 2007.

* Workshops to help Omar to his freedom.


"Please help me get out of here! I have not been charged with any crime,
why am I still in prison when I haven't even been charged for an offense?"
- Omar.

the more friends Omar has the better, can you help? feel free to attend this FREE gathering and share with like minded people and meet new friends.

Send letters of support to:

letters@theargus.co.uk
(a local newspaper who have supported this case.)