Prime Sinister John Howards military style prison detention centre on Christmas Island off the Western Australia coast would be a great place to house the war criminals themselves? 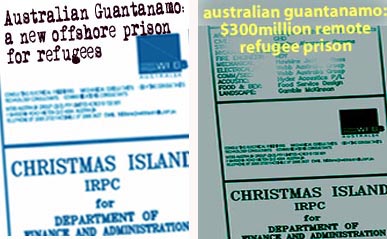 The opportunity follows a visit to the island by a flock of pelicans that migrated from a US military base.

"One wonders why refugees would need to be contained within such a high security regime," he said.

Sinator Vanstone says the centre will be used to process asylum seekers offshore and she is not aware of the reason behind the Americans' visit.

"I haven't got any idea - they're not answerable to me and neither is the Defence Department," she said.

"[The Defence Department] might have something to say about it - I don't know - just had nothing to do with me."

Sinator Vanstone says "she believes" they did not even inspect the detention centre while on the island?

Now pull the other one it plays jingle bells?

A new maximum security immigration detention complex under construction on Christmas Island, has been dubbed "Australia's Guantanamo Bay". Australia's new remote offshore detention centre will have cameras in bedrooms, electric fences and electronically controlled doors - to force centre-wide lock-downs. The level of security and surveillance, greater than at any existing detention centre, makes parts of the complex comparable to a maximum security prison.