Israeli Company Blockaded This Morning for the Third Time 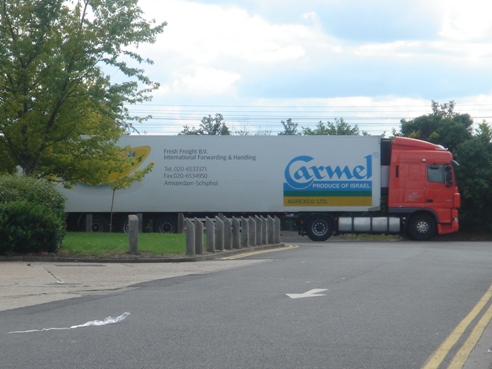 Early This morning (Sun), Palestine solidarity activists blockaded the Israeli
Company Carmel Agrexco’s UK headquarters. This was part of a non-violent protest against recurrent breaches of human rights and international law in the occupied territories of Palestine.

The purpose of the protest is to highlight Agrexco's illegal activity in court.

The action follows a legal warning letter to Carmel stating clearly why they are in
breach of the law.

Protesters used wire fencing and bicycle D-Locks in a well-planned blockade at the two entrances to the building. At 5:30am several protestors locked themselves on to the Company's gates and internal barriers blocking access to the property. At 6:30am the police arrived but were prevented from accessing the property by the human blockade. Several company trucks have also been stopped.

This follows from actions of 11th November 2004, when Palestine-Solidarity
protesters from London and Brighton were arrested after taking part in non-violent blockades outside the same company and 30 August 2006, When demonstrators blockaded the company for 11 hours and no arrests were made.

September 2005, a Judge ruled that Agrexco (UK) must prove that their business is
lawful. The acquittal of the seven activists before they were able to present their
defence meant that the court did not have to rule on the legality of
Agrexco-Carmel’s involvement in the supply of produce from illegal settlements in
the occupied territories.

In September 2006 protesters blockaded the company again, Carmel refused to have demonstrators arrested becuse this would have lead to another embarrassing court appearance where their business methods would havebeen investigated by a British court of law.

Today’s blockade aims to expose this company’s complicity in murder, theft and
damage of occupied land, collective punishment, apartheid, ethnic cleansing, and
other breaches of International Law to public and legal scrutiny.

Photos of the last blockade

Report on Carmel’s Involvemnt in the Jordan Valley:

Protestors decided to end the blockade at around noon due to terrential rain and hail. They were cautioned, but not arrested. More news later..