On the Ground: The govenor arrives and the women march - bad vibes in the bar 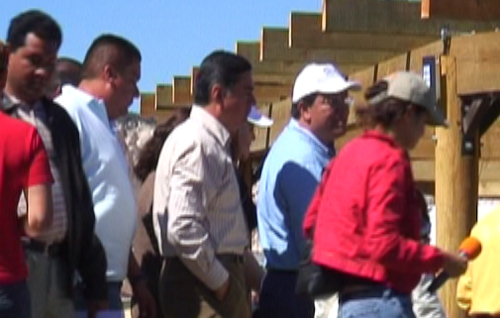 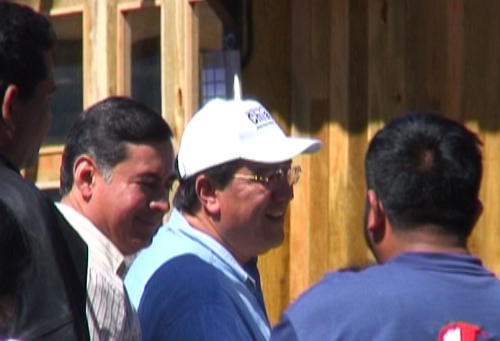 He wandered around a national reserve park, surrounded by mean-looking thugs employed to keep the man alive. As I watched and filmed from a good distance, avoiding police and bodyguards, I witnessed one obvious spokesperson for the local campesiños (farmers) being escorted out of the room, set up for question time, by one of the governor’s officials. There seemed to be some kind of disagreement going on with the campesiño attending the meeting.

My contact, who accompanied me, also had problems getting into the meeting. But she succeeded and got close enough to question Salazar on issues facing local women. Once the governor learned which organisation she represented (which cannot be disclosed here) he brushed her off with a wave of the hand.

Irony was the word of the day, as they trundled around the nature reserve with man-made lakes that already looked polluted. Nothing grew or lived in them. The information centre was made from freshly cut wood, wood from the forests, which probably meant it came from one of the extensive logging corporations operating in the area.

Irony too came yesterday in the guise of international conservation programs. I was informed by one contact here the World Wildlife Fund was condemning the indigenous people for clearing forest areas by burning, a process they have performed for centuries, yet said nothing against the extensive logging programs that were destroying vast areas of rain forest.

I cannot say whether this is true or not, I can only report what this on the ground hack is being informed by others.

But one thing visibly apparent is the mountainsides that have collapsed after heavy rainfall, causing catastrophic mud slides that have wiped out villages and people.

Last year, as Hurricane Katrina became an international household name, here in Chiapas hurricane Stan hit, causing deadly mud and debris landslides, killing thousands. The deforestation only increased the problem, leaving vast areas of mountainsides exposed, with nothing left to soak up the water and protect indigenous villages from such disaster.

Does Governor Salazar care? Probably not, considering contacts here have informed me he has a large sum of money invested in filling the flood plans so new housing projects can be built, only to be swamped and flooded when the following year’s rains hit.

Just like the UK housing expansion programs on flood plains around the Thames estuary and across East Anglia – thank you very much indeed deputy Prime Minister John Prescott.

When flood lands are filled and houses built there is just one question? Where’s all that excess water going to go?

Answer: the same place it always has done, leaving new homeowners under a metre of water. Here flooding can mean your house is swept away, your family too. But, hey, who cares as long as they have paid you for their home. It ain’t going to affect the profits, right?

By late afternoon on Saturday, as violence hit the peaceful protest in Oaxaca again, the Independent Women’s Movement (MIM) gathered at San Diego church in San Cristobal and marched into the central Zocalo.

They called for the end of violence against women, as has been seen in Oaxaca and Atenco, and for years across Chiapas. They called out in solidarity with all women of Mexico, and across the world, labelling Neoliberalism as violent oppression against women.

The protest went smoothly, with little to no police presence. One camera team drew suspicion. They looked like a television team of two men who never smiled, who seemed intent on getting full facial shots of the women, and even of me at one point. But I turned away, hopefully in time, and from that moment on decided to cover my face.

Soon after they disappeared a local government official arrived, asking any foreign-looking people why they were at the protest. Tourist was the answer from everyone.

After work I headed to my usual bar for a beer. Two men appeared, mean-looking fuckers too. They sat at a table watching me for a while, then moved right next to me and ordered the cheapest and nastiest tequila you can buy.

They seemed real interested in me, kept using the word “matar” and “muerto”, looking directly at me and laughing.

I have seen the eyes of killers before, after spending many years hanging out with screwed up US Marines in Southern Spain. I know what the eyes of those who have killed are like.

This guy who sat next to me and leaned in to light my cigarette for me had those eyes. I played it cool. But what really struck me was how the bar staff became really nervous when these men came in.

I decided to wait till they left and would get a taxi back to my residence, phoning my contact to let him know the situation.

The men with the camera at the demonstration, he said, were probably police. The men in the bar, according to others, could have been paramilitaries, or police, or even narco-trafficers. Or they could have just been two locals fucking with me.

But with the camera team and the local official turning up I would have to be more careful from now on.

As I said before, the more you stay in one place and the more you learn, the more things start to crawl out from the woodwork, or from under a rock in this case.

Yes indeed. For the tourists San Cristobal looks pretty, sweet and full of wonder. But unbeknown to those that pass in and out of this town, San Cristobal, I am told by several veteran hacks here, is a hot-bed for paramilitaries.

The innocent façade of this town soon crumbles when you are here like me, and walking in the street at night suddenly becomes a very dangerous pastime.