The founder of the hardline Nazi drinking outfit known as the 'Wolf's Hook White Brotherhood' was stabbed to death at around 4.00am this morning, Monday November 22nd. The Nazi, Mick Sanderson, known as 'Belsen', of Nottingham, was stabbed to death in a drunken fight with another WHWB member, who is now under arrest. Sanderson was stabbed through the heart.

The 'Wolf's Hook White Brotherhood' have been in existence for around 2 years, running their own Hitlerite website, and being closely involved with the 'Nationalist Alliance'. Apart from hard-drinking, the gang specialise in wearing Nazi insignia, styling themselves very much on the form of an 'outlaw' motorcycle club, and sporting Hitlerite and fascist tattoos. They also claim to have been involved in violence against ethnic minorities. 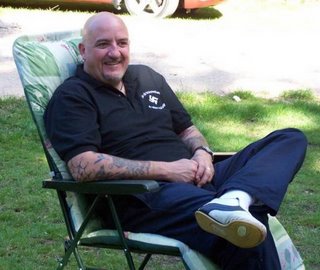 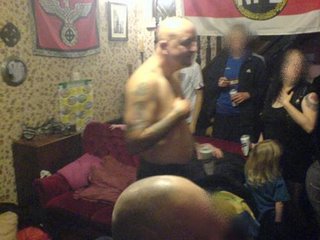 Details and photos of individual WHWB members have previously been posted on Indymedia by both antifascists and by their fellow Nazis.