This sunday a demonstration against the church Faderhuset turned into resulted in police brutality and mass arrests. 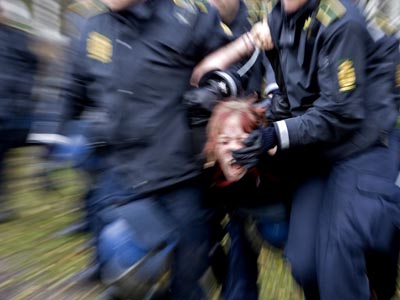 Arrest with a cops glove in mouth 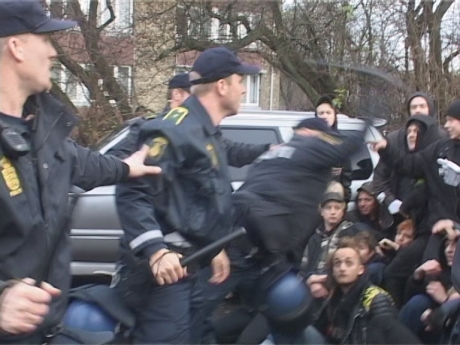 At around 1 pm sunday a demonstration arrived at the church of the right wing christians who are trying to evict Ungdomshuset. Apparently their was some vandalism by a smaller group while the demonstration was still arriving.

Suddenly the police announce that all demonstrators are under arrest. Some run away, some fight back and some just try to defend themselves but the police do not care who is who. Several cops repeatedly hit sitting arresties with battons. One demonstrator was hit several times in the face and another had his arm broken.

We can only see this police violence as part of a campaigne against supporters of Ungdomshuset to scare people away from taking part in demonstrations, actions and parties.

83 people were arrested and 8 was still detanyed monday morning.

We hope that this video will not make anybody change their mind about comming to Copenhagen. In stead we hope that you will understand our call for support. And get even more freinds to come.

You can watch the video here:

http://politiken.dk/poltv/?ExtID=1198
(The paint was allready there)