Dame Dieng is 21 and has been arrested without any valid explanation, the Senegalese police invented the same old insult and threat known for centuries stuff when they invaded the political opponent, Idrissa Seck, headquarters where Dame Dieng happened to be, he had been recruited by this contradictor to the authoritarian Wade regime after having worked for a newspaper’s website and proved there his incredible gifts for computer matters. 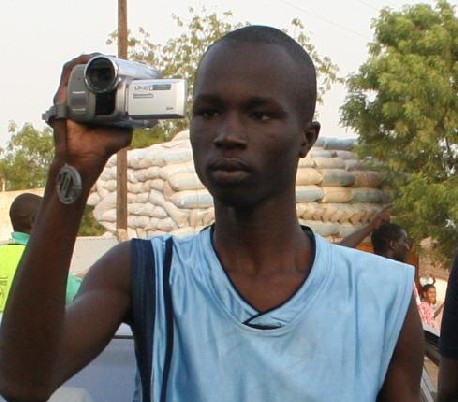 Some people try to understand why young Senegalese try to escape from their country on unsafe wooden boats putting their life in danger on a 6 to 8 day trip to Canaries which are part of Spain and the first step to Europe. Dame Dieng unlucky story can help to find the explanation or part of it.


The presidential elections in Senegal will take place in February 2007 which partly explains the rising tension and number of opponents arrested by the political police named without trying to make a joke in English they probably ignore, the DIC. I promise I’m not inventing it, it’s meant for direction of investigation criminelle. But Wade, the president in charge now, aged 80 officially but in reality probably 84, has since the beginning in 2000 been intolerant with journalists, politicians and contradictors (there is a DIC hidden there too), putting so many people in jail for trifles or simply for telling what they think that we are allowed to wonder how far can a regime be called a democracy. The fact this takes place in Africa justifies nothing, there is also a low intensity war in the south of the country, named Casamance, constant fights for 20 years, which no media talks about and that causes to the population a very difficult and unsafe life, this part of the country being sprinkled of mines making the agriculture dangerous, the amount of children having lost one leg or one foot is very high and these mines regularly kill people on roads, but that’s another story. This was only to illustrate the Senegalese regime which is not the worse of Africa but still far from being an example to anything. Life is hard in Senegal and people get used to everything from dying from malaria to lacks and shortages of everything, gas for cars, gas cylinder for cooking, water, roads, etc.

But I’m not taking part in the political Senegalese campaign and I definitely don’t support Idrissa Seck, Dame Dieng’s boss, I’m actually only trying to take this young guy out of jail. He was taken by the police last Tuesday 24th of November for a 4 day close watch, which is over long already but he has then be maintained in jail for no other reason than working for the principal rival of the old chief. He is still in jail today and must I remind you of the treatments and tortures, psychological and physical that take place in prison? Should I remind you also of the consequences of such treatments on people psychological balance and mind structure? To my view, too much is too much, a country , and an African country more than another, needs its youth, must protect it’s youth, it’s their future they are stamping on, young people that show abilities for studies and agility of mind must be protected like a treasure, treasure which is the key for the future of the country and instead of that the Senegalese government puts them into jail for no reason and gives them rotten meat at the campus restaurant which caused riots last year with many wounded students some severely. Dakar’s university Cheikh Anta Diop is so poor that it produces only unemployed, the courses being inadequate to the jobs offered, you can study 4 years and get your degree if you want but then you be a taxi driver like everybody or try to swim to Europe.

With Dame Dieng it is the future of the nation they are putting to jail and it’s a crime against the entire humanity and against the chances of development that are already very thin and difficult to preview. Everybody in Africa and in Senegal hears the word development several times a day but no one has never seen what it means and what it is in real life except a trick for politicians and organizations to run their bizness being governmental or not, nothing changes or if it does it’s to get worse, this is not pessimistic statements, I’m strongly optimistic and trying to find solutions, it’s facts.

I consider each extra minute or hour this young man spends in prison as a crime against the future of Senegal and Africa. So if anybody can help to get him out that would be fantastic, you know the ways in the states to contact the media or organizations dealing with human rights in your country better than I do, I am presently in France and contacting here all the media and friends that can help , I intend to make the more noise about this I can do, it does help to pass the information around, the more the case is known the less they can keep him in without any legal motive.

Forgive my English that’s terrible I know it, don’t post any comment telling me I write English like a Spanish cow, I already know it. Thanks for any help you will give and anytime you will spend to help him.

The lawyers in charge of the case worry and fear for their imprisoned client, according to them the senegalese authorities want to keep him in until the February 2007 election. The ministry of justice has refuse to appoint an examining magistrate to study the case so the lawyers cannot ask to anyone for release on bail. They can just cry out for help. The president of the tribunal cannot deal with the case having ordered the first step of his arrest he is not empowered to pronounce a second decision. The journalists present and sent by different media declare he has done nothing at all.