Parties from Polish goverement involved in Neo-nazi-party. Call for boycott.

Call to Members of European Parliament to boycott Maciej Giertych, whose assistant was a leader at a Polish Neo-Nazi camp! Call to stop the Polish Neo-Nazi movement, that is rising in power!

Letter in pdf with more pictures in it: - application/pdf 175K 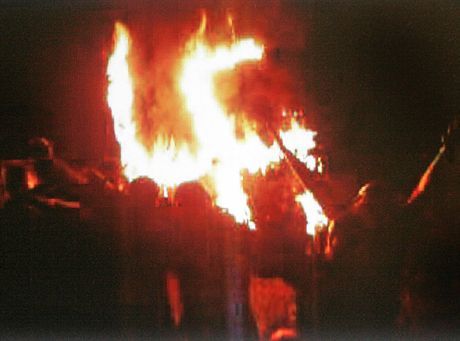 Hello!
My name is Ras Fufu, I am from Poland, and I would like to say that You do nothing to stop the wave of Neonazism that was spread in Poland by the media of Catholic Church and allowed the Neonazi movement to enter Polish Government. I can only promise You that it will get worser and worser, because I observe how people are more and more scared. Media use autocensorship, because they are afraid of loosing advertisements of state-owned companies or can see their license not prolonged or even revoked. I used to run a small radio show, and now the radio authorities said that they are afraid to put it on air.

I mean the people who are against the Neo-Nazism, we have even less freedom of speech than we had before. The whole subject on Neo-Nazism in Poland is a taboo subject. Recently a monument was erected in Warsaw to R. Dmowski- a person who jumped from joy when Hitler took over the power, and who strongly disproved of German Nazism because it was not enough anti-Semitic!

I believe that in Poland people do not know what is Neo-Nazism and what bad things it promotes, because this ideology is not discussed at all in the media! Crucial facts, such as the story that this Polish Fascist, Mr. Dmowski, was somehow for-father of Maciej and Roman Giertych, are not told in the media. The media are not discussing the issue of neo-Nazism in Poland at all. You can find the workshops on Neo-Nazism in Poland only at some festivals for Rastas. Media keep people believe that there is no problem, that Nazism is not existing in Poland. I know it is there, not only in the web, but also around me. I have even people from my family who are openly Nazis. And the problem is there- dormant, but present in the minds of millions of people who believe in it, because such ideology was mixed with religion. There are normal neo-Nazi parties that are much more radical than the LPR. This movement can grow stronger, especially when the mass-media and education are controlled by these people.

I was protesting in 2004 and in 2005 when in the Catholic “Radio Maryja” an evangel of racial prejudices, of anti-Semitism, of Jewish conspiracy was preached. Over 4-6 million of people in Poland believes in this shit that there is Jewish conspiracy against Poland and that the foreigners want to cheat us and steal our land. This nation-wide hate- radio for over 14 years was teaching that Jews are responsible for all of the Polish misery. People were told in this nation-wide Catholic radio that Holocaust genocide was a lie, that it was only a work camp, and the whole story was made up by Jews. Do You know who supported me? Nearly no one! If some media reacted on dozens of my letters warning them of what will happen, then their reaction was far too weak. A crew of one private TV stations went to the gathering of the listeners of the Catholic radio and simply recorded how the Catholics were calling them “Jews” (in the meaning of “traitor”), and using violence against this television crew. Go and check this movie:

The Catholic Church enabled these people to get to the power, it has given to them their media. The conspiracy theories were mixed with Catholic prayers, politicians were acting between the holy messes. We wanted to make a great demo against Catholic Church who in Poland was openly promoting such politics, but the day before the demo the pope John Paul II died, as if he knew about the massive demo planned and died because someone told that it was exactly he who was responsible for the content in the whole story was made up by Jews radio that was directly subjugated to him and may times even blessed by this pope.

And now we have these people in the government- they entered it in my opinion solely due to the support from Catholic media, that was strongly biased and were not allowing any criticism on them. We have now Neonazi education minister, Mr. Roman Giertych. We have Neonazists in the public television, such as Piotr Farfał, vice-chef of Polish Public Television TVP (for Polish people something like BBC in Britain), who earlier for whole two years was editing a racist neo-Nazi newspaper- “Front” (intro page from it pictured in the attached file).

“We are not tolerating cowards, traitors and Jews”- he announced in his newspaper. In the article “The real picture of Jew” it was written that Polish nation has to be cleansed from Jews if it has to develop properly, and that all Jews, no matter whether they are good or bad, has to be banned out of Europe. In his newspaper it was written that it is “Our Holy thing, to get rid of Jews from Poland”.
Go and check where he works now!:


Leokadia Wiacek, Politician of LPR, secretary of LPR in Higher Silesia Region and also the assistant of eurodeputy Mr. Maciej Giertych in Europarliament, pictured at a Polish Neo-nazi Camp, where politicians from LPR and their youth organizations were shouting “Hail Hitler” (more on it in Polish newspapers:

http://www.dziennik.pl/Default.aspx?TabId=14&ShowArticleId=23263). Mr. Maciej Giertych Member of Euro-parliament was even nicely pictured with his parliamentary assistant, Leokadia, who took a leading role on the Neo- nazi camp, as well as her husband.

View the film from the Polish Neonazi-camp with politicians from the party of Maciej Giertych, as revealed by Polish media. Go and listen to it! :

The people on the camp were singing their favorite song: “National Socialism- the only right way for the country!” National Socialism’s abbreviation is Nazism. They were also shouting: Hail Hitler! Polish flag at his camp was placed next to the Neo-Nazi flag.

In the file attached You also find a picture of a Neonazi politician, Member of Polish Parlament, Bogusław Sobczak (League of Polish Families, a party in Polish government). Maciej Twaróg – local LPR politician in Krakow City Council, Tomasz Połetek- assistant of Roman Giertych, all holding hands in the Hail Hitler style. When member of Polish Parliament, B. Sobczak was asked about this picture, he said that he and his colleagues were asking for beer!

Adam Machaj, secretary of LPR In Szczecin, and an assistant of EU deputy Sylwestr Chruszcz (league of Polish Families), as well as Łukasz Siemaszko, member of regional council, were singing on 14-1`5th of January in a night train, when traveling to the LPR national congress in Warsaw: „Heil Hitler”, and praised Hitler that he did “proper things with Jews”.

There are many more stories like these, it is happening every day (such as recently with the parlamentarists attending anti-Semitic congress:

http://www.gazetawyborcza.pl/1,75248,3733978.html ). It all shows that the Neo-Nazi movement is strong in Poland and entered the government. And the only place where people are told about the current state of this movement are music festivals! No wonder, if the media are chaired by people like they! I have never seen that such groups were infiltrated, or even observed by state authorities, as it is the case for example in Germany. I cannot infiltrate them even if I wanted, I do not look like they, and their webpages are not allowing for external viewers to check what such groups are doing. Besides, who should observe them, if they are in the government and co-rule the country! How long will You wait? Until some violence, or war, will erupt?
Cheers,
Ras Fufu