The government will publish its white paper on the future of Britain's nuclear weapons on Monday 4 December 2006. Block the Builders are calling a mass blockade of AWE Aldermaston on 11 December. 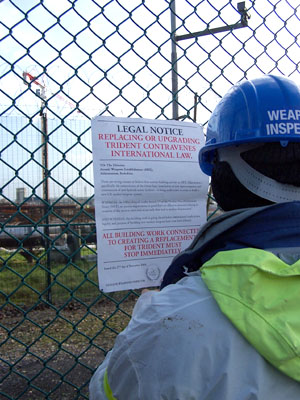 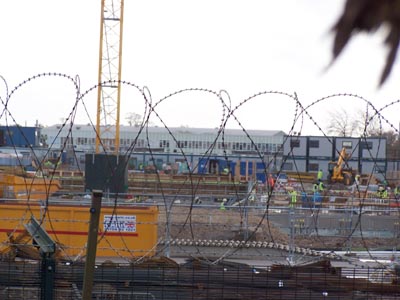 We need to show that their is massive opposition to any new nuclear weapons. Block the Builders are calling a mass blockade of AWE Aldermaston on 11 December. People from as far away as Yorkshire and Merseyside are already indicating their intention to come to the Berkshire bomb factory.

While there will be a three month period for "debate" after the publication of the White Paper, Tony Blair has also made it clear that, in the end, MPs will only get to vote on the government's preferred option.
Meanwhile building work at Aldermaston continues apace, making a mockery of the supposed "debate" as millions are being invested in new facilities.
Right now, work on the Orion laser site - a key facility for the future of Britain's WMD project - is well underway.

http://moblog.co.uk/blogs.php?show=9068 for pix). Let's build for a massive blockade on 11 December!

If you care about Britain throwing billions at its weapons of mass destruction while people die on hospital trolleys, if you care about a lack of resources for tackling climate change, if you care about the money being spent on keeping troops in Iraq and Afghanistan, now is the time to get off your bum and come and show your opposition to how your money is being spent and to Britain's status as a WMD proliferator.
What do we want? Genocidal weapons of mass destruction or real security?

The cops were extra fluffy with the GP/BtB action last Monday, but this is likely to be an arrestable action if you blockade (unless there are really a LOT of people). Legal support team on the day, etc. Meeting the night before to plot and plan (see website for details).

There's also useful support roles for non-arrestables, so, whatever your situation, please come down if you can.

Details of the blockade can be found at: