On the Ground, Mexico: A president sworn in and protests spill out

By 10.30am all Mexican television stations showed President Fox passing over power to incoming elect, fraud - depending on who you ask – the new “sweeping reform” president Filipe Calderon.

What the Mexican people did not see was the midnight secret ceremony some 10 hours before where Fox passed over his authority to Calderon behind closed doors.

An hour before the aired ceremony of the right, leftwing officials again stormed the Congressional stage, the second time in one week, and fought live on air, declaring the entire election a fraud and this green, white and red ceremony a farce.

Self-elected leftwing and legitimate president, or defeated leftwing president, Lopez Obrador – it depends on who you ask – stated his people would march peacefully on the national auditorium, where Calderon is due to give his first public presidential speech.

Calderon swept in with reform, deploying thousands of riot police have in Mexico D.F.

Here, in San Cristobal de Las Casas, Chiapas, the scene was a downright weird one.

No sooner had Calderon donned his green, white and red sash when several hundred protestors marched along the main road into the centre, Insurgentes, declaring the election a fraud, under the close watch of uniformed police.

But the political march was preceded by a colourful musical street parade of the Fiesta de Guadalupe. Children and adults dressed in bizarre costumes and demonic faces and danced along the street on their way to one of the churches situated high on a hill over-looking the town.

The two marches seemed to be intertwined into one to the unsuspecting tourists who cheered and clapped both the fiesta and the pro-PRI march. Police officers watched them all with suspicion.

The undercovers were there too, some with cameras, others just in the protest and in the crowds of on-lookers.

But the filming myself and a colleague did was cut short when two uniformed state police followed us and started noting down our details. We moved out fast to avoid any trouble.

It is now 3pm, the Fiesta de Guadalupe is still roaming the streets, accompanied by the Virgin Mary, although she’s lost a few years since I last saw her, and she is followed by three bikini-clad girls throwing sweets at the heads of unsuspecting tourists.

State police are patrolling the streets in ever-increasing numbers, more today than ever, in huge pickup trucks, and explosions are everywhere from fiesta fireworks that tend to blow up prematurely.

For now, here in base camp, José, the gum and cigarette seller – he is only ten years at most, but is wiser and more grown up than many adults I know in the UK – he teaches me street hand shakes and I give him an orange, a pen and some paper, bringing a little light relief in these strange, threatening and tense times in Mexico.

Sorry, that should have been PRD, but PRI and other groups, a general hate rally against Calderon, all were welcome.

The lastest from others here, the march settled in the Zocalo and protestors set about burning, I am told, a "very life-like" effigyof Filipe Calderon, lovingly named now "Fi-Cal". The effigy burned big and strong only leaving a pile of ashes and a pair of very shiny black businessman's shoes.

More updates later this evening as more is coming.

Thanks for the comments Dave, sure would appreciate further free doses of caffine, will contact soon.

Indeed, I did miss the student march and the FICAL effigy burning, busy editing and avoiding further indimidation from the police.

As for the poverty situation, you are correct, you just have to walk past Los Portales at night and see the women and children hulddling together from the cold.

It is hard to get video of this, as you know, a lot of the indigenous people, especially the elderly ones, tend to get upset around cameras. This is their country, after all, and we have to respect their wishes.

But the poverty issue here links into so much of the current Chiapas situation, the repression, the land grab, the economic climate - I'm working on it.

As for last night, the action expected did not materialise, mainly, this hack thinks and witnessed, because of the total control of the zocalo by Coca Cola, as they funded a vile show of coporate sponsorship when the Christmas lights were switched on.

Needless to say the police presence increased dramatically to protect the Coca Cola branding that was strewn across the whole damn town.

Contacts informed me in previous years certain individuals did set fire to the Coca Cola branded Christmas tree and burned it to the ground, which is why it is now under armed guard night and day, while people are robbed, mugged and murdered outside the supermarket. 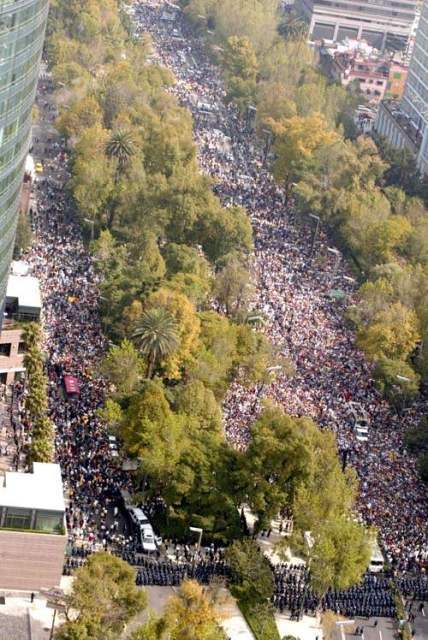