Birmingham's Contribution to Buy Nothing Day 2006 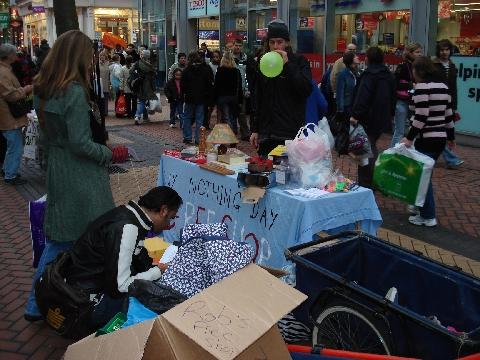 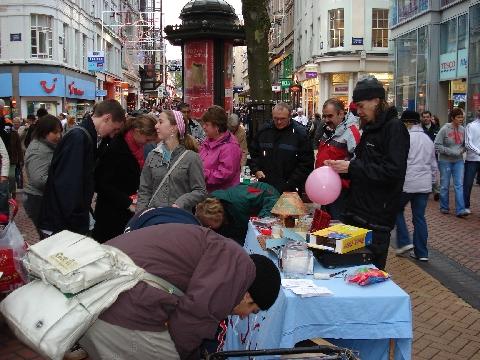 Buy Nothing Day has been celebrated in Birmingham for a few years now, initially by Birmingham Friends of the Earth's anti-consumer info-stalls and Santa Claus demonstrations. Last year, in addition, autonomous events were staged: in-store pranks and games, Food Not Bombs, and a Free Shop.

This year the anti-consumerist protest Santas were back, as were Food Not Bombs, who serve free food in town fortnightly. The Guantanamo Bay campaign was present raising awareness, a fantastic portable sound system turned up, and the Free Shop returned. All these groups came together to make the event what it was, attracting a strong crowd and creating a busy, vibrant street party.

It has long been recognised that capitalism is over-productive of goods, and that our consumer culture produces a very wasteful society.
A free shop is a shop where we exchange goods without a pricing system: unwanted items are donated and wanted items taken away.
'Junk belongs to us, the people. It does not belong to councils, shires, governments or contractors'. Freeshops promote direct recycling and re-use of goods, locally, and in a way that answers immediate need.
Freeshops 'have their roots in the anarchist movement' and are well established in Northern Europe and in the USA. There are always temporary freeshops too, and a monthly freeshop has been running in Norwich since 2004. Internet freeshops have given new life to the movement through the online 'FreeCycle' community [see

http://groups.yahoo.com/group/birmingham_freecycle].
Occasionally, FreeShops can be stolen. This happened to a freeshop in Whitechapel in 2002. Such incidents fortunately are rare; because no money changes hands and no one makes an unfair profit, freeshops don't encourage criminal activity, unlike those other kinds of shops.
Any of us can start a freeshop. This reporter would like to see it become a regular event, with people swapping goods in town as a more sustainable challenge to the consumer culture of Birmingham City Centre.

"Today has been a huge success. Almost all of the stock from the shop
has been taken away by the shoppers of Birmingham. Along with this
they've hopefully taken away a new way of looking at consumer habits in
this country. People visiting the stall have been very enthusiastic
about what we're doing; some individuals were very enthusiastic about
getting involved themselves so there may be more than one Free Shop at
the next Buy Nothing Day. Everything which we gave away today has been
saved from being sent to the local incinerator and all of the stock was
hauled into the city centre in a small bicycle convoy. Having music at
the event really got people interested and made the afternoon feel like
an event worth celebrating".

Food Not Bombs returned after a 2 month break to serve reclaimed food to the hungry and campaign against poverty, rubbish food, homelessness and militarism. The group strengthened it's commmitment to using non-aluminium cookware, featured innovative new recipes, an improved information shop, and was greatly energised by new people. Three Food Not Bombs first-timers took part, with one commenting that FNB was the 'one of the most positive political experiences' she had had in years of campaigning experience. 'The group's ability to communicate and organise made for a great team experience,' she said. 'We all were so positive and supported each other. It felt like a proper team effort which was fantastic and I want people to know about that'. As usual the food was enthusiastically consumed and information on local and global issues distributed. The collective ended the day with a social and met again the following Tuesday for a review meeting and to plan future actions.

Food Not Bombs will be back Saturday 9th and Sunday 10th December (as part of the vigil for Human Rights Day), and there is a meeting to plan this on Tuesday 5th; social events are also in the works. Email

For more on the freeshop movement check

All in all it was an exciting event that brought a vibrant and political street culture to Birmingham, and showed how different groups can collaborate to strengthen the movement's range and appeal - here's to many more of these kinds of events.

Photos From the Food Not Bombs Collective 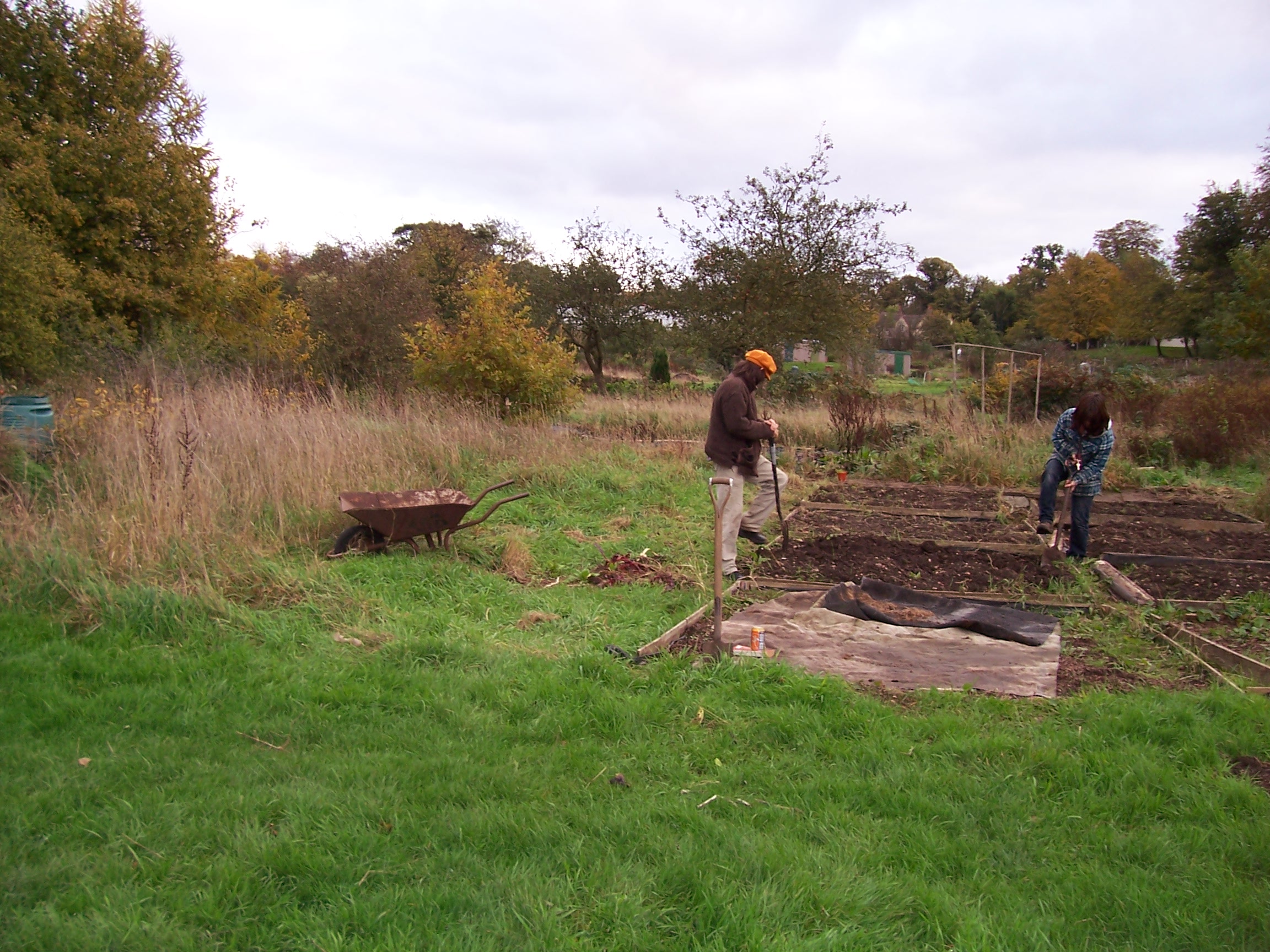 we come in peace 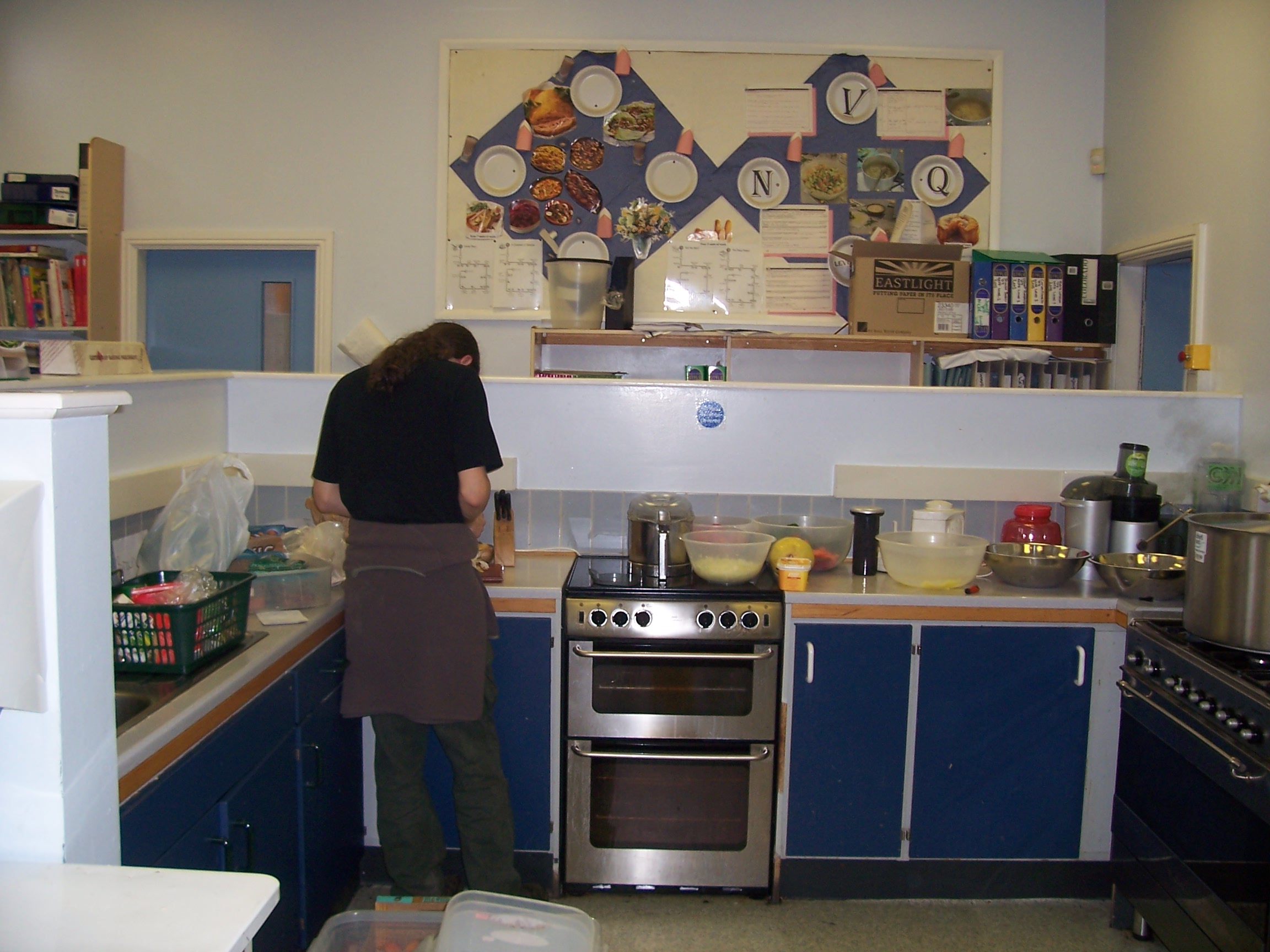 Two scenes from the Food Not Bombs embedded photography unit. The first image shows the allotment being worked by the FnB co-operative which, having already provided potatos to supplement the reclaimed food we serve, is now being cleared, dug and prepared before the frosts set in. The amount of growing space has been increased, the soil is excellent, the number of volunteers has doubled (there are now 7 active in the space) and we look set for for good planting season. Get seed swapping now!

The second image captures a moment from the cooking process for last Saturdays FnB, which usually takes place from 9am. We would like to express our gratitude for the use of this kitchen.