On Sunday the 3rd of December, around 60 people went to Harmondsworth Detention Centre (near Heathrow) to show their support and solidarity after the revolt that took place there earlier in the week. 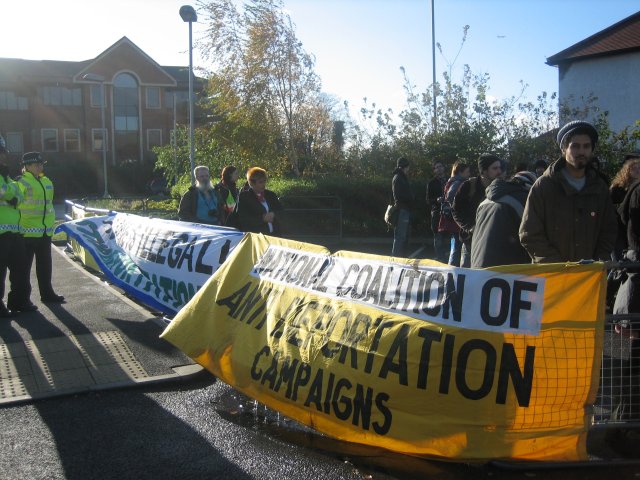 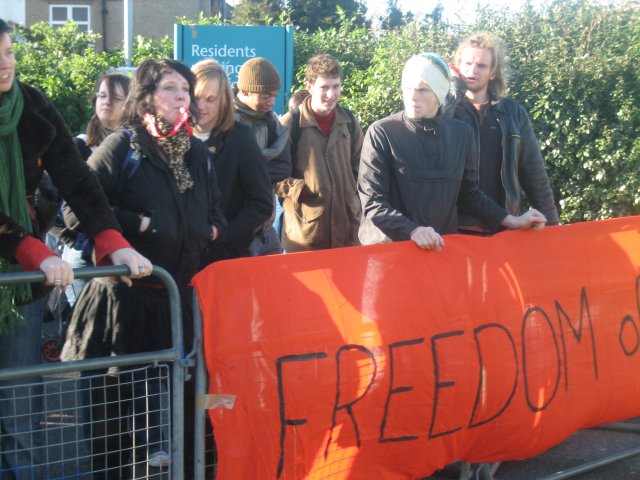 There were speeches from campaigners of several organisations (e.g. National coalition of anti-deportation campaigns (NCADC), Barbed Wire Britian and London No Borders).

A speaker from No Borders London pointed at the need to shed light on the web of private companies that are profiting from the sordid businees of locking up innocent immigrants and their families in shocking conditions. Companies such as Kalyx (which runs Harmondsworth) are not only unaccountable but are brining down the standards in the treatment of detainees.

Ex-detainee George Mwangi spoke about his awful experiences in Harmondsworth, including prolonged solitary confinement and tampering of private communications about his case. George demanded an enquiry into the conditions in privatly run detention centres as well as the events that led up to the revolt this week.

Emma Ginn from NCADC said that previous experiences of similar incidents in Yarlswood Detention Centre and others showed that the government would go to great lengths to victimise those involved.

It is likely that perceived 'ringleaders' of the revolt will face very serious charges, witnesses would be deported and continous re-locations will make the defence cases very difficult. Emma Ginn encouraged fellow campaigners to start a support network as soon as possible.

Most of the detainees have now been moved to other centres, many to near-by Colnsbrook Immigrant Dentention centre.

The demonstration today finished at 2pm to avoid any potential jeopardy to the visits to detainees, that began at that time.