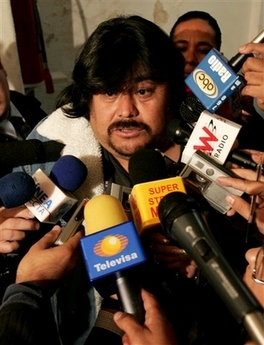 Flavio Sosa one of the founders of the Oaxaca People’s Assembly, APPO 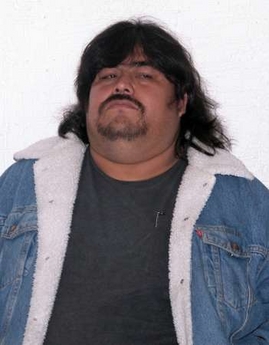 Flavio Sosa one of the founders of the Oaxaca People’s Assembly, APPO, arrives at news conference in Mexico City, Mexico, Monday, Dec. 4, 2006. Police arrested Flavio Sosa, the emblematic leader of a six-month-long leftist protest movement that took over the southern city of Oaxaca and battled authorities, authorities reported on Monday. Sosa, whose heavyset, bearded presence become almost a symbol of the leftist People’s Assembly of Oaxaca, was detained late Monday in Mexico City, federal police said, though they gave no immediate information on the circumstances of the arrest.

MEXICO CITY (Reuters) - Mexican police on Monday arrested a left-wing activist who is one of the leaders behind six months of protests in Oaxaca that led to violent clashes with riot police.

Federal police said they arrested Flavio Sosa, the most well known leader of the Popular Assembly of the Oaxacan People, or APPO, after he held a news conference in Mexico City. Sosa, who apparently left the colonial city of Oaxaca last week after an arrest warrant was issued for him, had just told reporters he planned to resume negotiations with the government of President Felipe Calderon, who took office on Friday.

Police said they arrested Sosa for his involvement in kidnapping, violent robbery and arson.

Federal police have recently gained the upper hand in Oaxaca, bulldozing barricades that had virtually shut down the city during months of often bloody protests by activists calling for the removal Gov. Ulises Ruiz, who they accuse of corruption and bad government.

The conflict has killed more than a dozen people, most of them protesters.

In November, police arrested more than 150 people during and after a riot that left four burned out government buildings. Since then, critics have accused the police of torture and illegally arresting other activists.

APPO spokesman Orlando Sosa, unrelated to Flavio Sosa, told Reuters his group still planned to begin negotiations with the government on Tuesday for the withdrawal of federal police from Oaxaca, in better times popular with backpackers, and for the release of arrested protesters.

Officials could not be reached to confirm whether the government would negotiate with the APPO.