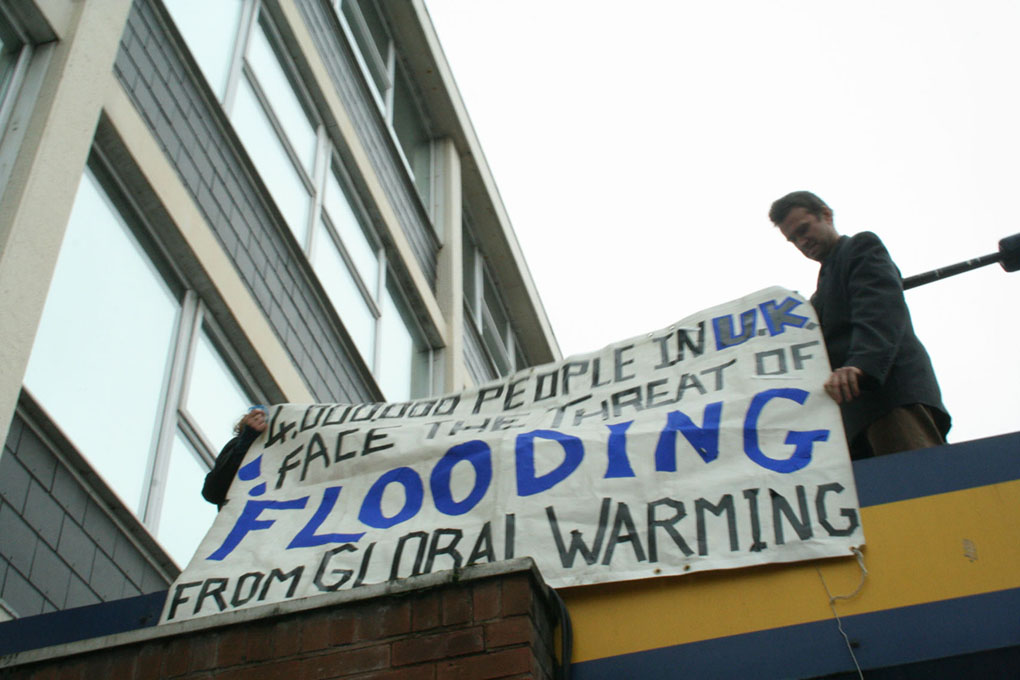 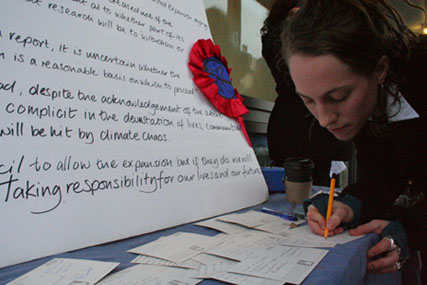 The planners were taken aback by the style of delivery when presented with a giant letter, but as the protesters explained, climate change is a giant issue.

They occupied the lobby and some climbed onto the roof, claiming they were trying to escape the rising sea levels that climate change will bring. A nearby soundsystem played recorded sounds of planes taking off in order to bring home to the planners the effects that their decisions could have upon people in the Southwest.

In the lobby protestors had the full attention of key people involved in making this decision and together they flooded them with the arguments: moral, environmental and economical, for why expansion must not happen.

The planners admitted to the protesters that they might have to rethink the entire approach to the national program of expansions in the light of increasing news about climate change. The recently published Stern Report predicts that climate change will push the world economy into a depression if we do not act now.

Councillor John Crockford-Hawley, North Somerset Council Executive Member for Strategic Planning and Transport, also agreed with our statement that if expansion went ahead it would make a mockery of peoples individual efforts.

Stansted airport was refused planning permission for their expansion last week. The planners said that the Stern report was a major factor in their decision. The government plans to expand almost every airport in the UK, tripling air traffic by 2030. But this would make it impossible to meet the targets for emissions in order to avoid runaway climate change.

The protesters urged people to oppose the expansion. Passerbyers thatt felt moved wrote their comments on postcards which were handed in at the end of the day. The deadline for objections is Dec 22nd, which is the last chance for people to have their say.

Southwest Climate Action are a group of individuals inspired by the climate camp and the global movements for climate justice. They have pledged that, if the expansion goes ahead, they will take direct action in order to stop it.

We are a group of individuals who are very alarmed by the proposed master plan to expand Bristol International Airport considering consensus by climate scientists that we need to take action now to avert catastrophic effects on humans and the ecosystems we are part of.

We need to prevent global temperatures from rising by more than 2 degrees above pre-industrial levels: the point at which dangerous processes caused by climate change could spiral out of control, such as the melting of the West Antarctic and Greenland ice sheets, which could raise global sea levels by 7m and Weston being flooded.

Aviation: Bristol Airport already pumps out more emissions than the whole of Bristol's traffic. If the airport expansion go’s ahead it will be impossible for North Somerset to meet their target of 60% cuts by 2050.

Local Economy: Tourists spend £11bn in the UK, while UK tourists spend £26 billion abroad – a loss of £15bn to our economy. Regional tourism is the single largest industry in the South West with 8% of all jobs; with expansion the tourism deficit is likely to double by 2030.

Recognise that climate change is a serious global threat, it demands an urgent response.

Recognise the glaring contradiction between the councils stated commitment, through the Nottingham declaration, to tackle climate change and the expansion of the airport.

Recognise that if the airport expansion goes ahead it will be to the detriment of the local and global economy.

Acknowledge that the ‘Master Plan’ contains inaccuracies and fails to deal with the issue of climate change, and thus is irresponsible.

Acknowledge that the people of the South West will stand by the council in the rejection of this insane planning application. North Somerset council will not be alone in rejecting the current wave of ill-conceived airport expansions.
Uttlesford Council Planners have recently turned down the expansion of Stansted saying
“It would be premature to grant planning permission for the increased use of the runway in advance of clarification by the Government as to whether part of its response to the Stern Review and other recent research will be to withdraw or amend its Air Transport White Paper.”
“Given new evidence, such as the Stern report it is uncertain whether the policy of encouraging airport growth is a reasonable basis on which to proceed.
If the expansion is given the go ahead, despite the acknowledgement of the above information, then the council will be complicit in the devastation of lives, communities and habitats around the world, who will be hit by the impacts of climate chaos.

It would be negligent for the council to allow the expansion, but if they do we will take sustained action to stop it, taking responsibility for our lives and our future.