Death toll continues to rise as Iraq war grinds on

With Iraqi deaths already estimated at around 650,000 and the American death toll moving toward 3,000, the US ruling elite’s actions will necessarily intensify the violence in Iraq, resulting in even greater casualties. 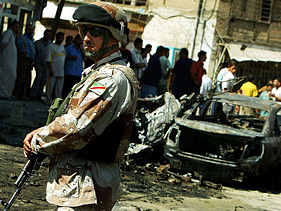 Resulting in even greater casualties

As the bipartisan Iraq Study Group issues its report to President Bush, and Republicans and Democrats come together to endorse former CIA director Robert Gates as the administration’s new defence secretary, the implications of the consensus to continue the Iraq war are underscored by the ongoing fighting and slaughter of both Iraqis and American troops.

In the first five days of December, 17 US soldiers have been killed and at least 130 wounded, pushing the overall US death toll in Iraq past 2,900. US casualties since the March 20, 2003 invasion now stand at 2,907 dead, 21,572 wounded in action and a further 24,565 injured in non-hostile incidents or evacuated due to disease. These figures do not include the tens of thousands of veterans who have sought treatment for psychological conditions or succumbed to illnesses since their return from the Middle East.

The US military is continuing to suffer heavy casualties in Iraq’s western Anbar province. Ten soldiers and marines have died there so far this month. Two marines were killed on Saturday by hostile fire in Fallujah, the Sunni Arab city where the Bush administration and the US military have repeatedly claimed to have destroyed the anti-occupation resistance. Deflating the propaganda, a Marine Corp report released in August declared that “the social and political situation has deteriorated to a point” where the occupation troops were “no longer capable of militarily defeating the insurgency in al-Anbar”.

Over the weekend, a representative of Saddam Hussein’s Baath Party, which was illegalised by the US occupation and leads much of the insurgency in western Iraq, declared from Syria there would be no negotiated settlement to end the fighting unless a withdrawal of all American troops were announced. The spokesman, identified as Khudiar al-Murshidi, a leading health official under Hussein’s regime, told Associated Press: “We have made clear that this is not a picnic. The Americans did not take a simple thing from us... They have stolen our country and killed our people.”

The desperate position of the US forces in Anbar was highlighted in mid-November by the deployment of 2,200 marines from the 15th Marine Expeditionary Unit to the provincial capital, Ramadi. The unit was a “reserve” force for the US occupation, kept on ships in the Persian Gulf for use in emergency circumstances.

The broader crisis of the US occupation arising from the intractable character of the Iraqi resistance is reflected in the death of four marines on Sunday in the crash landing by a Sea Knight twin-rotor helicopter on the shores of an Anbar province lake. The US military has blamed mechanical problems, not the actions of insurgents. As an article in the Washington Post revealed yesterday, American troops are at heightened risk of death or injury in such accidents due to the run-down maintenance and over-use of aircraft, vehicles and other equipment in Iraq.

The Post reported: “Helicopters are flying two or three times their planned usage rates. Tank crews are driving more than 4,000 miles a year—five times the normal rate. Truck fleets that convoy supplies down Iraq’s bomb-laden roads are running at six times the planned mileage, according to Army data.” The US military is now spending $17 billion per year to replace or repair equipment, compared with $2.5 to $3 billion before the war.

Despite having thousands of vehicles in warehouses awaiting repair, Army maintenance depots are working at half-capacity due to a lack of funding. Maintenance and supply is so far behind requirements that numerous units based in the US are now rated as “unready” for deployment due to lack of equipment. Inevitably, units will be deployed into combat zones with equipment that a US officer described to the Post as “at the far end of its expected life”.

Heavy fighting is taking place in other Sunni Arab cities and towns. American troops have been killed in Hussein’s hometown of Tikrit, while the nearby town of Siniya, near Samarra, was placed under siege on Thursday due to the stepped-up operations of insurgents. Iraqi government troops opened fire yesterday on local people demonstrating against the shortages of food, water and medical supplies. The US military has also launched an offensive to take back from guerillas control of Baqubah, just 55 kilometres from Baghdad.

As the insurgency against US troops rages in the predominantly Sunni Arab provinces of western and central Iraq, the bloody civil war between Sunni opponents of the occupation and the Shiite fundamentalist parties that dominate the pro-US Iraqi government is escalating with each passing month. Alongside rival militias, the vacuum created by the collapse of any semblance of law or security in Baghdad and other cities is being filled by warlords and crime syndicates.

The victims are the Iraqi people. Last month, the UN released its estimate that 3,709 men, women and children were killed during October—the highest official monthly toll since the 2003 invasion. The scale of the killing is such that even Kofi Annan, the outgoing UN secretary-general, felt compelled to reject the Bush administration’s claims that there is no civil war in Iraq. “When we had the strife in Lebanon and other places, we called that a civil war; this is much worse,” he told the BBC, adding that Iraqis were “right” who said they were better off under Saddam Hussein.

All indications suggest that the death toll in November was even higher than the October record. According to Iraqi interior ministry statistics, at least 1,850 Iraqi civilians were killed in November, a 44 percent increase over October. The ministry only counts deaths in what it classifies as violent attacks. It does not count “criminal deaths”—a broad category that includes the dozens of bodies discovered every day of suspected death squad victims. Many of these killing squads are allegedly operated by Shiite factions within interior ministry itself.

The carnage continues. Each day this week, the bodies of 40 to 50 people have been found in the street, bound, tortured and shot. Car bombs detonated on Saturday in the shopping area of a Shiite district of Baghdad, killing 51 people and wounding 90. Just nine days earlier, more than 200 were slaughtered by coordinated car bombs in Sadr City, a major Baghdad Shiite suburb.

The editorial of the Iraqi newspaper Azzaman commented on Monday: “Every one of the nearly six million people of Baghdad has a horrendous story to tell. Shiites kill Sunnis, rebels kill Americans and Iraqi troops, US and Iraqi troops kill rebels and civilians and so forth. Baghdad has become a killing ground... Reports of killings, kidnappings and bullet-riddled bodies dumped in public places and streets keep pouring into the newspapers. If published, they would fill the news pages of Azzaman each day.”

Despite the catastrophe facing the Iraqi masses and US occupation forces, both parties of the American elite have made clear they will continue the war. The will of the American people, expressed in their repudiation of the militarist policies of the Bush administration in the congressional election, is being treated with contempt. The concern of both Republicans and Democrats is to make tactical changes to ensure the US occupation continues and the real aims of the war—dominating the country’s territory and vast oil resources—are realised.

Republican powerbroker James Baker, who co-chairs the Iraq Study Group (ISG) with Democrat Lee Hamilton, has already stated that US withdrawal from Iraq is “not an option”. Whatever its exact recommendations, the ISG report due out today is predicated on American troops remaining in Iraq for the indefinite future. In fact, the most likely outcome of the bipartisan discussions on a “change of course” in Iraq is an increase in US troop numbers.

Likewise, Robert Gates, who was a member of the ISG, declared during formal questioning on Tuesday before the Senate Armed Services Committee that any withdrawal of US troops from Iraq was conditional on the Bush administration’s agenda being “successful”. No Democrat challenged his statement and the committee unanimously endorsed his installation as defence secretary.

The White House has already put into motion plans for a brutal crackdown to silence the Shiite movement of cleric Moqtada al-Sadr, who has steadily built mass support through his demand for a timetable for the withdrawal of all American forces. An unnamed US intelligence official told the Washington Post late last month that support for the Sadrists had grown to such an extent that, were elections held, they would “sweep most of the south and also take Baghdad”. The Sadrist militia, the Mahdi Army, is now assessed to number between 40,000 and 60,000 and to be more motivated than the American-created Iraqi forces.

US forces are steadily being prepared for an offensive against Sadr City, the Mahdi Army stronghold in Baghdad. At the end of November, the US military announced that the 3rd Stryker Brigade is moving to Baghdad from the northern city of Mosul to join the 4th Brigade of the Texas-based 1st Cavalry Division and replace an Alaskan-based Stryker brigade which is returning to the US after a 16-month deployment. Overall US troop numbers in the capital have been beefed up to over 15,000.

With Iraqi deaths already estimated at around 650,000 and the American death toll moving toward 3,000, the US ruling elite’s actions will necessarily intensify the violence in Iraq, resulting in even greater casualties.

Blame the insurgents not the allies.

In my opinion the allies are doing a great job in reconstructing Iraq and bringing democracy to the country. The only people who are causing death and mayhem are the insurgents and extremists on both sides of the sectarian divide in Iraq. America has pumped billions of dollars in aid into Iraq for reconstruction. The only thing holding progress back is the continued violence by the terrorists many of whom are linked to Al Qaeda and supportted by the regimes in Iran and Syria.