Part One of Medical Cannabis Campaign. Exposing Drug apartheid discrimination (social segregation defined by differential and/or preferential treatment) when it comes to personal choice and the individual human rights thereof. 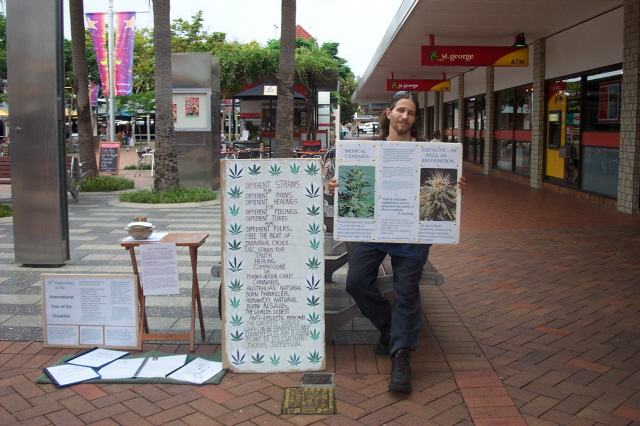 This year was the 25th Anniversary of the Disabled/Disability Day, so we took the opportunity to set up a small awareness campaign in regards to Medical Cannabis being applied in a truly beneficial status.

Part of Disability Day is an awareness campaign called, “Don’t Dis- my ability”.

When it comes to DIS-ability, not only are people, by ‘fate‘, forced to live out their lives within the limitations of their disability, but their rights of self-improvement, self-maintenance, self-medication and self-choice on all these things, have also been DIS-ed.

The rights of disabled people, and their individual right to choose what medication best helps them, have been dismissed (or sent away from one’s presence, without the okay of the individual sufferer). Individual rights and freedoms have been dismissed by collectives and been replaced by FORCED CHOICE AGREEMENTS i.e. “Choose what we force you to choose and agree with it, or be fined, persecuted, condemned, discriminated against, jailed and have your individual choices, freedoms and beliefs eradicated”. Welcome to a ‘Fair Go”, or is that just, “Go and get stuffed!”

Just like all members of the human race, dis-abled people are usually still abled enough to still make their own decisions, or they have carers do that for them. They do not need, on top of their own suffering, to be forced to suffer persecution, discrimination, no tolerance, hatred, apartheid, discrimination policies on use and choice - which already create apartheid (social segregation) between non-disabled individuals in this country and others. In turn this segregation creates dis-abilities where there were none before such as depression - from not being allowed your rights; anxiety and paranoia from a very reasonable fear of being persecuted for use and choice.

Fair Choices vs Forced Choices. - Our Government and its vested interests/enforcers have a simple statement, “Australian Government - informing you of your choices”. What it should be, is, “Australian Government, Big Pharma, Vested interests and enforcers - making your choices for you, then informing you of them”, after they have written them into apartheid policy, which is not law at all, it is an abuse of law.