Mexican journalists give recognition to Indymedia Mexico and to Brad Will 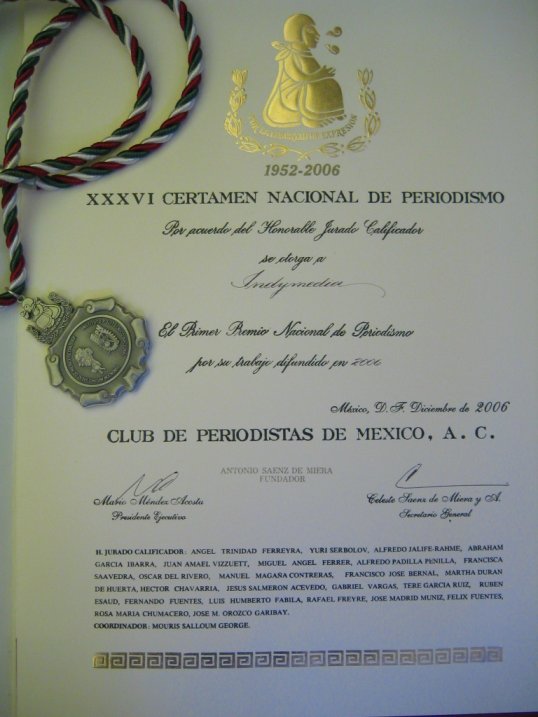 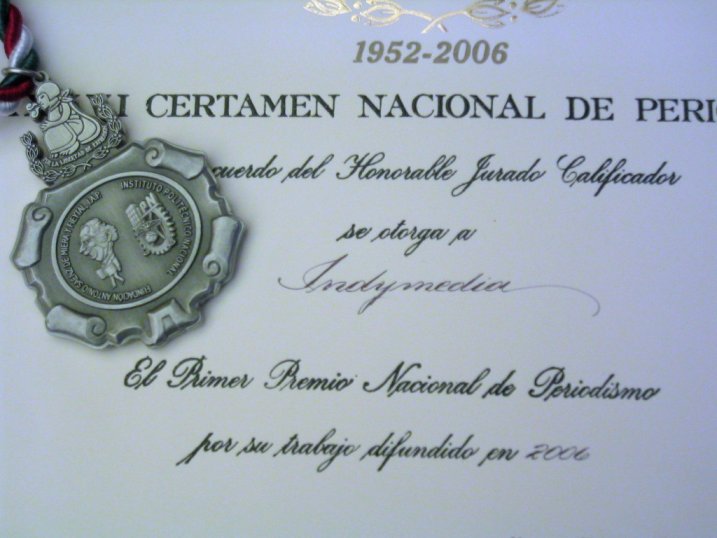 Mexico City, Dec. 6, 2006: The mexico.indymedia.org website received a national award and recognition for digital journalism during the ceremony of the "National Journalism Awards" held by the Journalists Club of Mexico, the Antonio Sáenz de Miera y Fieytal Foundation, and (in this occasion) the National Polytechnic Institute. These awards and honorable mentions consist of certificates and medals granted by a jury of fellow journalists "in recognition of the quality of the work", according to the organizers. It is worth clarifying that the Indymedia Mexico collective did not enter itself into the contest and learned only of the award after members in the Oaxaca chapter (indyOax) were informed of the jury's decision.

At the same time, our colleague Bradley Roland Will from New York Indymedia received a posthumous recognition from the Mexican journalists who warned about the climate and violence and impunity that prevails in Oaxaca, where an occupation by militarized police forces props up the regime of Governor Ulises Ruiz. A broad popular uprising has been calling for the governor's removal for more than 6 months.

Brad Will was gunned down October 27th while filming an attack by pro-government gunmen against members of the Popular Assembly of the People of Oaxaca (APPO). One month later, in a clear message of impunity, the government of Ulises Ruiz cleared the public security administrator of Santa Lucía del Camino Abel Santiago Zárate and sub-director of the Municipal Police Orlando Manuel Aguilar Coello of all charges in connection with Brad Will's death for "lack of evidence". Photo and video documentation showed both officials firing on APPO sympathizers on October 27th in Santa Lucia del Camino, shortly before Brad Will's murder.

Members of the Indymedia Mexico and IndyOax collectives received the recognition awarded by the Journalists Club of Mexico and denounced the climate of violence and state terrorism against the Oaxacan population in general and against independent journalists in Oaxaca, while warning about the complicity between the corporate media and the Mexican government to violently repress the popular movement in Oaxaca.