NW Feminists: Women are not to blame for rape

Learn about the facts:
every year there are an estimated 47,000 rapes and 300,000 women sexually assaulted. 93% of women do not report being raped to the police. Only 6% of reported rapes result in conviction.

Stand up against rape.

What can you do to help:
Complain to your MP : 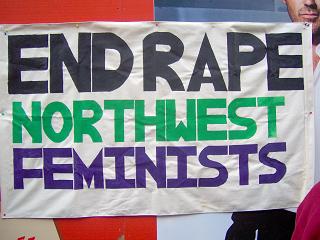 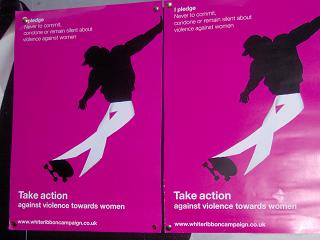 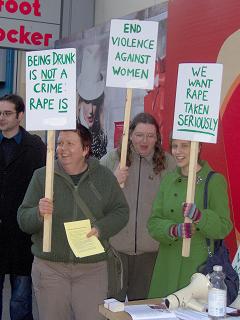 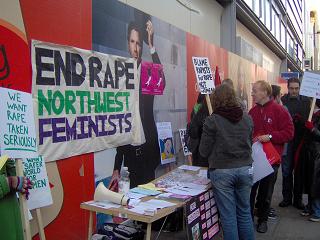 here are some pics!

All men are responsible for stopping male violence against women


Breaking the silence by naming an atrocity is the first step in ending it. Male violence against women must be named specifically.

To maintain patriarchy, "Women's agony at the hands of men must never be revealed. If women steadfastly and courageously began to tell the truth and would not stop, would not be co-opted, would not become afraid, the truth of our enslavement would be undeniable and the jig would be up"
—from "Telling the Truth" by Sonia Johnson.

Because globally, men as a group hold more power than women, ALL men, both violent and non-violent, must be held responsible for stopping male violence against women. To allow this atrocity is to condone it.

Women, who outnumber men, are the single largest group of oppressed humans on the planet. Men have oppressed women nonstop for the longest length of time of any oppressed group, more than 5,000 years (The Chalice and the Blade by Riane Eisler).

A woman once told me that dealing with male violence "was just part of being a woman! NO! Male violence against women is unacceptable and must stop!!

It's MALE violence against women!!! Obviously women arent taking back the night from dangerous women!

When mass rapes are reported by the media, timid terms such as "gender violence" and "sexial violence" and just “violence" are used and do not name MEN as the perpetrators
Its obviously MEN who rape women and MEN who raped hundreds of thousands of women in Bosnia, Darfur, Rwanda and many other nations. It was MEN who created more than 90 rape camps in Bosnia where they raped and tortured women to death.

Being battered by MEN is the number one "health" problem of American women. (U.S. surgeon general). MEN batter 12% of pregnant woman, causing 17% of birth defects (March of Dimes).
Seventy-five percent of women murdered during domestic violence are killed by MEN after they leave them. (U.S Dept. of Justice-Bureau of Justice Statistics).
Since 1993, MEN raped and murdered more than 320 women in Juárez, Mexico. Approximately 100 were sexual-torture killings; 450 more women are missing. Men travel to Juarez to hunt, rape and murder women. (

I don't understand why many people-especially women-resist holding ALL men responsible for male violence against women. Here are some popular evasions:

1. "Not all men are violent" No one said they were. Since men collectively hold more power than women, non-violent men are also responsible for stopping male violence against women.
2. "Women are violent too" Two wrongs don't make a right. However, as usual, women are blamed for their own degradation. As Mary Daly wrote in her book Pure Lust, (p.365) " Within the Virulent State of phallocracy, women have been attacked and divided against our Selves. From the earliest times of the patriarchy, countless mothers have been broken and the resulting broken daughters have carried on the chain of fragmentation. . . They have been reduced to responding to the fettered/fathered urge to reproduce their altered–that is, patriarchally identified selves –in an endless circle of Self destruction. Such forcible altered women have appeared to be normal within the man made milieu."
Also, female violence pales in comparison to male violence. Men commit 88 percent of violent crime (US Bureau of Justice statistics). Women don't build rape camps to torture and molest men to death. Women don't control the U.S. government which spends half a trillion dollars a year on mass murder (war). Globally, women can't walk alone without the possibility of men assaulting them. The reverse is not true.
Even though some broken women may collaborate with patriarchal men to gain power (Condi Rice, Margaret Thatcher etc.) it doesn't change the fact that patriarchal men are in charge and allow selected token "henchwomen" into the boys club–if they identify with and behave like patriarchal men.
3. “Violence is a human problem affecting both sexes”
Mary Daly calls this tactic “universalism.” Muddying the waters, it dilutes the specific focus on male violence against women by making it a gender neutral, universal human issue.
4. The absent referent The "absent referent" refers to something without naming it. (See Neither Man Nor Beast by Carol Adams p.16-17). Mary Daly in her book Quintessence wrote, "Naming the agent is required for an adequate analysis of atrocities. Timid terms such as "sexual violence," "domestic violence" "gender-based violence," and "violence" don’t name men as the perpetrators. Even Amnesty International, which calls it "a global scourge," uses the term "violence against women" instead of "male violence against women." (

http://web.amnesty.org/actforwomen/index-eng).
5. Men also rape men and boys This doesn’t change the fact that in every nation on earth, in all levels of society, men rape women. Rape is a male hate crime against women. Men who rape women have contempt for women and want to degrade them. Even when men rape males, contempt for women is the underlying issue. Men rape males to degrade them by treating them like raped women.
6. The duality argument Supposedly, opposing something directly "gives it more power." If racism and sexism were not opposed directly in the U.S., blacks would still be slaves and women would still be men's property, unable to vote, own a business or keep their own wages. If the Nazis were not opposed directly, they would now run the world.
7. Passive grammar Instead of the active voice using the passive voice (women were raped by men) instead of the active voice (men raped the women) shifts the focus from the perpetrators and their actions (men doing the raping) to their victims (the women being raped).

Silence is Complicity
All men are responsible for stopping male violence against women. Men can speak out against it to other men, support womens groups and shelters, and raise their sons to respect women There are MANY ways men can end male violence agaist women. Its up to each man to figure out how do do this in his own way.