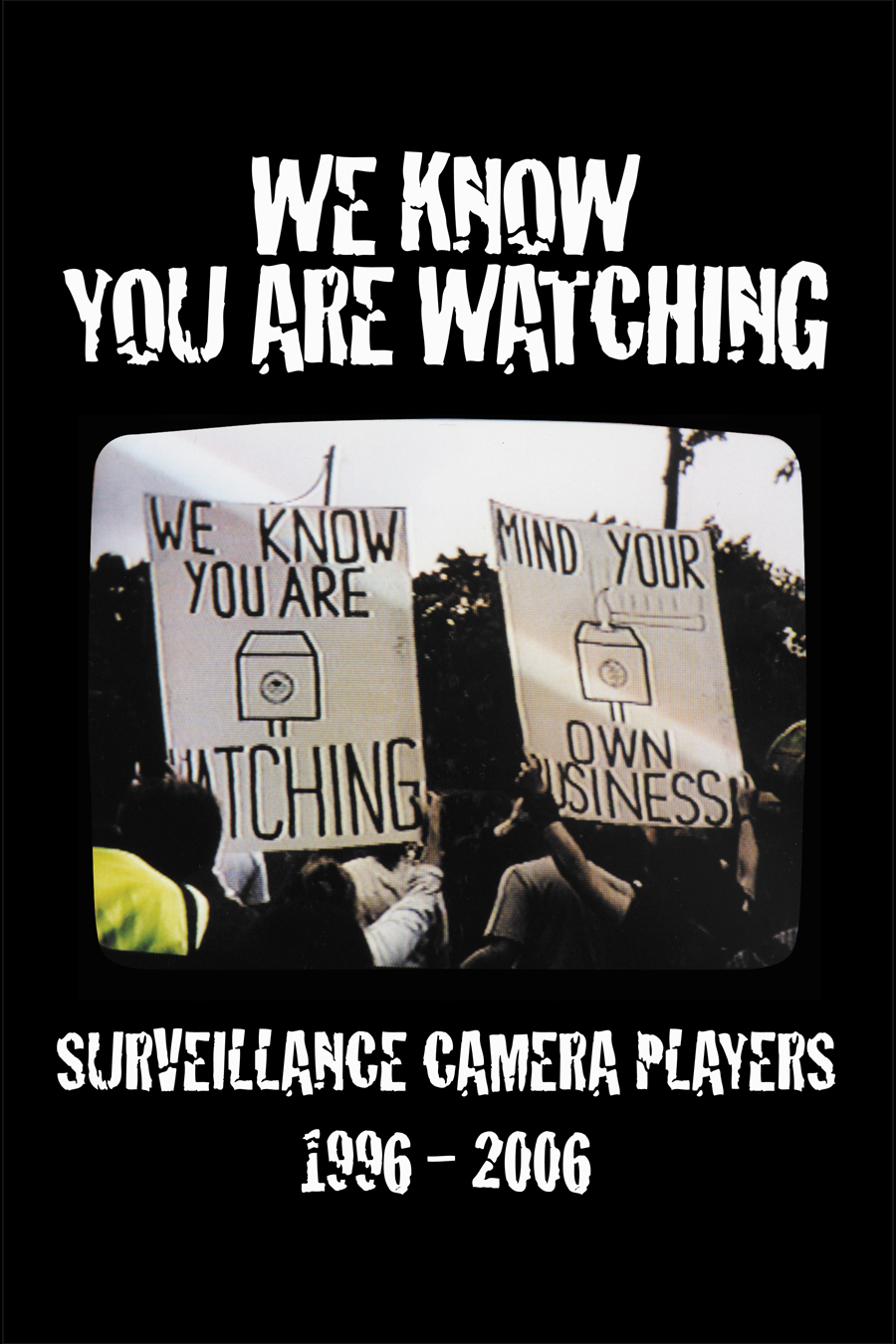 picture on cover shows SCP in the UK, June 2001

“People are generally deceived when they judges issues and events, but later, when they understand things in their particulars, they are no longer deceived […] It is clear that the quickest way to open people’s eyes, given that a general matter may deceive them, is to make them get down to its particulars.” – Niccolo Machiavelli, Discourses on Livy.

The Surveillance Camera Players (SCP) is a small, informal group of people who are unconditionally opposed to the installation and use of video surveillance cameras in public places. The SCP was formed in New York City in November 1996 by two groups of friends/activists: one centered around Michael Carter, the author of the manifesto for “The Guerrilla Preprogramming of Video Surveillance Equipment” (1995), and the other around Bill Brown, fresh from the “Unabomber for President” campaign (1996). Both shared a strong interest in the theories and actions of the Situationist International, especially its use of “pranks” or detournement (diverting bland or oppressive materials for subversive purposes).

The SCP’s first performance was on 10 December 1996, when the group presented its version of Alfred Jarry’s Ubu Roi on the 100th anniversary of the play’s first performance. Texts relevant to this performance – which was interrupted and shut down by the NYPD – plus an announcement of the SCP’s upcoming season of performances, were published in Bill’s situationist zine, NOT BORED! (#26, November 1996 and #27, May 1997). For a while thereafter, the SCP was completely inactive; it was not until July 1998 that the group performed for a second time. But its third and fourth performances, which came in November 1998 and offered the SCP’s version of George Orwell’s Nineteen-Eighty-Four, really got things going. The group has been intensely active ever since then. The years from 1999 to 2001 were especially active, productive and rewarding.

Centered around Bill, the SCP has also included several long-term members (notably Susan Hull, also Kimberly, Miranda and Sean). Over the last 10 years, over 50 different people have performed in/with the group. Narrow in one respect (only one African American), the composition of the SCP has been quite varied: there have been a great many women (over 75%), several gay men and lesbian women, and people ranging in age from their teens to their fifties. All defined their politics as anarchist.


Surveillance cameras have installed in New York City in three great waves: 1) in the 1960s and 1970s, to fight thefts by organized crime (the first NYPD cameras were installed around City Hall and in Times Square in the late 1960s and early 1970s); 2) in the 1990s, as part of Mayor Giuliani’s “zero tolerance” anti-crime and anti-drug campaigns; and 3) in the wake of September 11th, but especially in the last year, which has seen the installation in the subways of 1,000 fiber-optically linked cameras built by Lockheed-Martin, the installation in Brooklyn and the Bronx of 505 wireless digital cameras financed by Department of Homeland Security funds, and the announcement that there will soon be surveillance cameras in all MTA buses.


The group has adapted nine works for performance in front of publicly installed surveillance cameras (including adaptations of George Orwell’s Nineteen-Eighty-Four and Wilhelm Reich’s The Mass Psychology of Fascism), and has written seven original plays (including It’s OK, Officer, which has been proven to work in other cultures and even in other languages.)


The group has made 14 maps of heavily surveilled neighborhoods in New York City. It has also made maps of other American cities (New Haven, CT; Portland, OR; Chicago, IL; Boston, MA; Providence, RI; and Cincinnati, OH) and cities in Europe (Graz, Austria; Leipzig, Germany; and Leeds, England).


Virtually every Sunday since Thanksgiving, 2000, and using its own maps for guidance, the group has given free walking tours of heavily surveilled neighborhoods in New York City. These tours have concentrated on what the things look like, how they work, and how they will work if they are improved (“smart cameras”). Over the years, approximately 3,000 people in total have attended. The group has also given similar walking tours in Portland, Chicago, Boston, Providence, Cincinnati, Graz, Mannheim, Leipzig and Leeds.


The group has authored and immediately posted on-line 38 position papers, sometimes in response to current events, other times to clarify a theoretical point (with respect to Debord, Foucault, Reich, Poe or Artaud) or the group’s relation to other groups. Perhaps the most important of these position papers was the one originally issued on 13 September 2001, which concerned the group’s determination to continue its efforts, both despite and because of the September 11th attacks.

The group has placed all of the above materials (texts, maps, photographs and video-clips) on-line, with the explicit provisions that none of it is copyrighted and that all of it may be used freely. The group’s website is somewhat popular, drawing around 3,000 unique visitors per day.

In addition, the group has also maintained 1) a whole variety of “blogs” (some of which keep track of news items relating to abuses of surveillance cameras, protests against their usage, and research into their effectiveness); 2) a series of on-going denunciations (corporate-types who try to recuperate the group, hucksters who run phony anti-surveillance groups, and visitors using military and/or government servers to access the site); and 3) a kind of encyclopedia of surveillance (laws and legal rulings, histories, technical descriptions and profiles of major investors into and users of surveillance technology).


The group has received a lot of media attention, both here in the USA and around the world. Stories/features have been aired on TV, in print, on the radio and on websites in German, Italian, French, Dutch, Hebrew and Japanese, as well as in English. The greatest coverage has come from The New York Times (6 stories); The Village Voice (6); The New York Post (4); CNN (3); MSNBC (3); Wired News (3); and RAI Italian Television (3). Because of a good deal of this coverage – despite its generally favorable tone – hasn’t been very intelligent, the group has maintained a blog in which the worst are castigated and the best are praised. There has also been a blog in which the names of “dead end” reporters who took up a lot of our time, but never managed to publish a piece or failed to get us a copy of what they published.


In August 2006, the group published We Know You Are Watching: Surveillance Camera Players 1996 to 2006 on Factory School Books. This 292-page-long book contains everything listed above (including a selection of black and white photos), except for the news coverage, the SCP’s responses to this coverage, and the entirety of the SCP’s encyclopedia of surveillance.


Following the model of Food Not Bombs, the SCP has always encouraged others to form similar groups and, if desired, adopt the SCP name. Over the years, SCP groups have been formed in Tempe, AZ; San Francisco, CA; Stockholm, Sweden; Bologna, Italy; Istanbul, Turkey; and Vilnius, Lithuania. Coordinated actions between these and other groups (especially Souriez, Vous Etes Filmes in France) were carried off in December 2000, September 2001, September 2002, and March 2006.


In 2004, a hardcore, heavy-metal thrash band from Germany named Ba’al released an album that included a track called “Surveillance Camera Players.” The words: “Why trust your self / When your government doesn’t trust you. Don’t trust anyone / Like your government does. You’re the star in a daily soap / Part of the great 24-7 movie. The optimists are mistaken / And even Orwell was an optimist.” Perhaps this is the place to note that the MTV2 video for the Blood of Abraham song “Eyedollartree” features a brief appearance by the SCP.


From 1999 to 2003, a great many of the performances of the SCP, plus several interviews with group members, were videotaped by a pair of professional documentary filmmakers (Jed and Amanda). The original idea was to produce a full-length, feature film called Someone to Watch Over Me. Though a 7-minute-long trailer was eventually produced, the film itself was not. In 2004, in response to the filmmakers’ increasingly single-minded turn away from the group’s overall project and towards the personalities of individual members, the SCP had no choice but to end the collaboration.


While most “prankster” groups are short-lived, the SCP has managed to endure and, at times, thrive, for 10 years, despite the relocation of several key members to cities outside of NYC, and despite the sometimes highly publicized personal problems of certain members. In general, the group has been both helped and hurt by its “spectacular” isolation, by the fact that it is the only group of its kind. To be fair: Australian activists have been performing in front of publicly installed, police-watched surveillance cameras since 1993, and Souriez, Vous Etes Filmes was founded in 1995, a year before the SCP. But the SCP was the first and remains the only group to offer a well-rounded package: street performances, videotaped documentation, theoretical contributions, maps and walking tours.

It is worth noting that, to this day, very few contemporary political groups or “independent” media websites inspired by progressive liberalism, ultra-Leftist or anarchism have made surveillance – that is to say, privacy, the right to be anonymous – a central concern or demand. Perhaps this speaks to the SCP’s weakness, its failure to start a movement. But there may be other forces in play. To conclude as we began, let us quote the Discourses on Livy: “It is as difficult and as dangerous to try to liberate a people that wishes to live in slavery as it is to try to enslave a people that wishes to live in freedom.”

Thanks for the report.

I think the point about anonymity is an interesting one. For anti-ID card/database campaigning the Anarchist Federation has attempted to address this and to explain its class perspective.

The rich will be able to buy anonymity up to a point because they have less need for the 'entitlement' of the welfare state that the British ID scheme confers. For example, in principle if they don't need the NHS private healthcare patients could make a case for opting out of the national electronic record (although private records may of course be shared by managed care and insurance cos, but you could imagine that members of such scheme will have some say about this). Note also that opt outs of the Children's Index are being considered for 'important' people which could include politicians. Celebrities and 'famous' people can also use the law to defend their privacy (since they can't be anonymous by definition!) which something available only to those who can afford lawyers to fight the cases.

I would say that if the issue of anonymity is put at the forefront of these issues, it could make it easier to argue against cameras. There is also the link between environment and privacy that needs exploring - in the near future we can expect that governments will want the mass of consumers to be accountable for their use of resources. David Milliband was only just now talking about everyone having a carbon credit card to buy petrol or flights- but if you are rich or powerful enough will your anonymity be preserved if your driver fills your petrol tank for you, or if you can use a company you control to buy the ticket for you?