The G8 summit 2007 will take place at the start of June in the north-east of Germany, in the luxurious Hotel Kempinski, which is situated directly at the Baltic Sea in Heiligendamm, at Bad Doberan near Rostock. 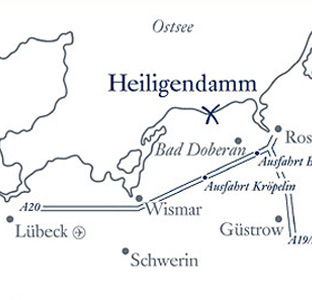 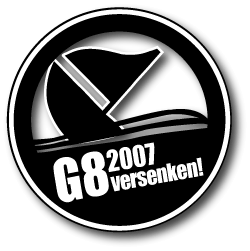 one of the logos of the mobilisation against the G8

Several caravans, bike tours and more actions are planned for May 2007, many based in and around Hamburg, where the left-wing project “Rote Flora” offers to act as an early convergence centre for protesters.
Another convergence centre for travellers will be in Berlin.
The Eastern European Caravan will start in April in Prague, whereas the Western Europe Caravan will start in Belgium, also in April 2007.

A camp of and for protesters nearby the G8 location is in discussion and is currently negotiated.

A 2m high and 13km long fence with concrete foundations will be build around the Hotel area and 15 000 policemen will be there on duty to protect the politicians. The politicians' main agenda items at the meeting will be Energy/Raw Materials, World Trade/Intellectual Property Rights, Environment/Climate and Development Aid.

A wide array of NGO's, left-wing groups and revolutionary organisations have already started to form a coalition against the G8, and prepare various actions and events to show their opposition to the summit. A call for internationals to converge near the summit location and to blockade the G8 summit, from Wednesday 6th of June onwards, has been issued.


Happenings and Preliminary Plan for Actions