The Cuban Five and US Terrorism...

Now is the time to demand the release of the Cuban Five. They were sentenced 5 years ago this month and have been imprisoned unjustly in the U.S. for 8 years for the crime of trying to defend their homeland against terrorist attacks... 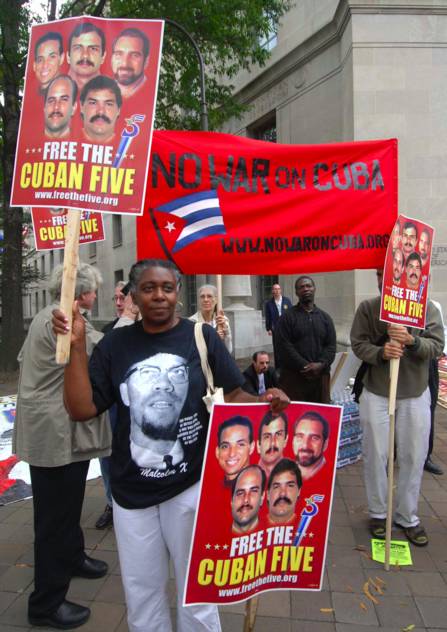 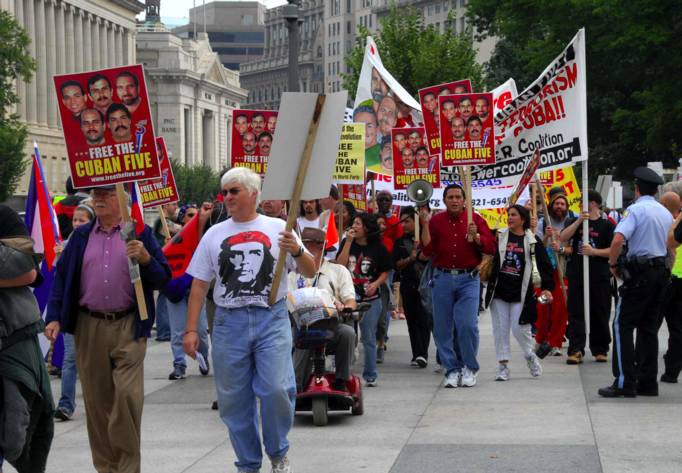 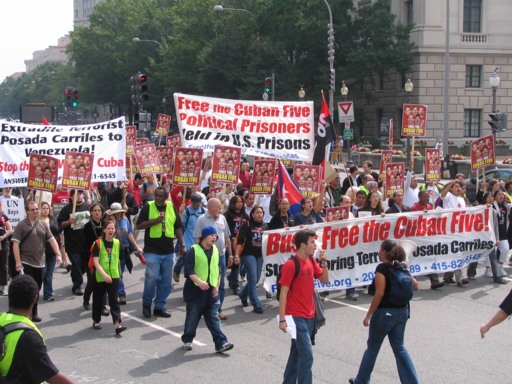 The Cuban Five and US Terrorism

Now is the time to demand the release of the Cuban Five. They were sentenced 5 years ago this month and have been imprisoned unjustly in the U.S. for 8 years for the crime of trying to defend their homeland against terrorist attacks...

December 2006 marks five years since the Cuban Five were sentenced to prison. In 2001, Fernando González, Gerardo Hernández, Antonio Guerrero, Ramón Labañino and René González were unjustly convicted of engaging in “espionage conspiracy” and other charges, and sentenced to terms ranging from 15 years to double-life. In fact, they committed no act of espionage against the United States. What they were doing was monitoring Cuban exile terrorist groups in the USA in an attempt to track and prevent terrorist attacks against Cuba.

It has been eighth years since the five men were arrested. And through all that time “anti-Castro” right-wing terrorist groups have continued to operate with impunity in this country. And the corporate media continue to hail them as “anti-Castro militants” and “freedom fighters,” while leaving their nefarious deeds unreported.

Since 1959 Cuba has been subjected to threats, sanctions, invasion, sabotage, and terrorist attacks upon its soil resulting in 3,478 deaths—all organized from within the United States by terrorist groups that are financed, organized, and sheltered by the U.S. national security state.

The U.S. government arrested the Cuban Five for sending to Havana information about terrorist plots and actions being planned against Cuba. Needless to say, the United States government wanted these groups to remain anonymous, free to continue their campaigns of destruction.

The Judge who convicted the Five actually admitted the existence of these terror groups. On December 14th, 2001, when Judge Lenard sentenced René González to 15 years in prison, she stated: “As a further special condition of supervised release the defendant is prohibited from associating with or visiting specific places where individuals or groups such as terrorists, members of organizations advocating violence, and organized crime figures are known to be or frequent.” Acknowledging that the terrorist groups were part of the established political landscape in Florida, Judge Lenard did not seem to see a problem. The problem was Gonzalez’s gathering information on them.

Since December 2001, voices demanding the immediate freedom of the Cuban Five have been multiplying around the world. The growing international movement for the freedom of the Five was recently described by Gerardo Hernández, in a message sent by him to solidarity groups around the world that were commemorating the eight anniversary of their arrests.

Gerardo, who was sentenced to an outrageous two terms of life-in-prison plus 15 years, wrote in his message, “When I remember back on what happened that September 12th, the first thing that comes to my mind are the words of the FBI agent, who in the middle of his efforts to try to turn us into traitors, said: “Cuba will do nothing for you. Nobody will do anything for you” How far off were he and his fellow officials to imagine what has developed over these years in the struggle to free the Five (to be honest, not even we, the Five, could have imagined!)… I will not have enough time to tell him about all the examples of support and affection that come to us from the Cuban people and from all our compañeros from around the world”

In defense of this cause, today there are 288 committees in 97 countries. In addition, on May 27th, 2005, the Working Group on Arbitrary Detention of the United Nation Human Right Commission declared the detentions of the five Cubans to be arbitrary and urged the U.S. government to take immediate measures to resolve this situation.

On January 11th, 2006, Amnesty International sent a letter to the government of the United States stating that the denial to grant visas to Olga Salanueva and Adriana Pérez, wives of René González and Gerardo Hernández, was an additional punishment, contrary to proper treatment of prisoners and their families. The letter also raised questions about the guarantee of due process in the Miami trial.

Meanwhile, the White House continues to tolerate the existence of anti-Cuban terrorists on U.S. soil. In March 2005, the well-known dangerous terrorist of Cuban origin, Luis Posada Carriles, entered the United States illegally. Today he is detained in El Paso, Texas, not because of the crimes he committed in several countries, including the United States itself, but only because of his illegal entry. Posada Carriles and Orlando Bosch, another terrorist who today freely walks the streets of Miami, are responsible for the 1976 bombing of the Cuban commercial airliner that killed 73 innocent people.

In November 2005, Santiago Álvarez and Osvaldo Mitat two confederates of Posada Carriles who helped him enter the U.S. by boat were arrested. Their arrest was not for aiding and abetting a terrorist (as it should have been) but for the lesser charge of illegal possession of weapons.

In June 2006, another scandal came to light in Miami when José Antonio Llama, a former director of the Cuban American National Foundation (CANF) threatened several of his former criminal accomplices with legal action, accusing them of defrauding him. In an open statement to the Miami media, Llama revealed that in a secret meeting in 1993 in Naples, Florida, the CANF created a paramilitary group. He accused the group of failing to pay him back a loan of almost $2 million. The loan was to buy eight ships, one helicopter, a high-speed motorboat, and ten planes for terrorist acts against Cuba. Even after revealing this, Llama was not questioned by U.S. authorities.

In April 2006, Cuban born Roberto Ferro was arrested for illegal possession of an arsenal of 1,571 weapons at his house in Upland, California. In his statements Ferro confessed to being a member of the anti-Cuban terrorist organization Alpha 66. Yet U.S. authorities did nothing to find out why and for what purpose Ferro had this arsenal in his home. And no investigation was made of his links to any terrorist organization.

In January 2002, a few months after the September 11 attacks, Bush announced in his State of the Union address, “First, we will shut down terrorist camps, disrupt terrorist plans, and bring terrorists to justice. . . My hope is that all nations will heed our call, and eliminate the terrorist parasites who threaten their countries and our own.” If the White House were really interested in fighting terrorism, it would shut down the anti-Cuban terrorist camps in South Florida and bring Posada Carriles and his accomplices to justice for the murders they have committed.

Instead the Cuban Five, who have broken no U.S. law, who possessed no weapons, and who committed no act of terror, sabotage or espionage, are languishing in prison for defending their homeland by attempting to monitor U.S. sponsored terrorism.

Call the New York Times and ask for an article on the Cuban Five!


The Popular Education Project to Free the Cuban 5

On Tuesday Dec. 12th (the official start of the 2nd Period of time for the Cuban 5), the Project is organizing a NATIONAL CALL IN DAY FOR THE CUBAN 5. We are asking people who support the release of the Cuban 5 to call the New York Times and ask to speak to Suzanne Daley, National News Editor, at 212-556-1234 and demand that an article be published on the Cuban 5.

Tell them you want an article to be written and they should contact the Popular Education Project to Free the Cuban 5 at 718-601-4751 for interviews and additional information on the Cuban 5!!

Videos related with the Five and Cuba: