The ongoing imprisonment of Hicks, which is designed to psychologically destroy him, has further underscored the contempt for legal precedent and democratic rights that characterises the entire Australian political establishment. 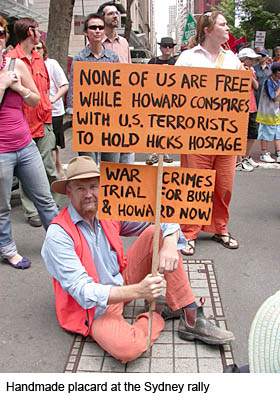 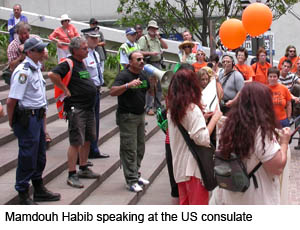 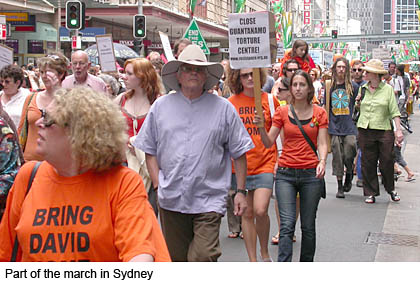 Last week, a few days before thousands of people demonstrated in Australian cities to demand the immediate release of David Hicks from Guantánamo Bay, his lawyers were granted a federal court hearing on December 15 aimed at forcing the Howard government to formally demand the US repatriate the young Australian.

Hicks’s lawyers will argue today in Sydney that the government has a constitutional duty to protect Hicks and wants the court to rule on Canberra’s claims that it cannot request his release because he has not broken any Australian laws. This, they argue, is “irrelevant”, “improper” and was not a consideration in the release from Guantánamo of British prisoners in 2004 or Australian citizen Mamdouh Habib in January 2005.

While it is unlikely to secure Hicks’s freedom, the court action is another component in the growing movement against the Howard government and its violation of Hicks’s basic rights.

David Hicks was captured in Afghanistan by the Northern Alliance in November 2001 during the American invasion of the country. In December the 26-year-old father of two was sold to the US military, which subjected him to a series of violent interrogations in Afghanistan, before transferring him—bound, gagged and hooded—to Guantánamo in January 2002.

He is now one of the longest-serving prisoners at the infamous jail, enduring physical and psychological torture, extended solitary confinement, sleep deprivation and various other criminal techniques to break his will. Cut off from any legal assistance and family contact for almost 18 months, in June 2004 he was served with bogus charges of aiding the enemy, conspiracy and attempted murder.

The five-year hell endured by Hicks is a direct result of Canberra’s refusal to demand his repatriation. Australia is the only government in the world not to request the release of its citizens from Guantánamo.

As is now clear to tens of thousands of ordinary Australians, the Howard government has used Hicks as another means of demonstrating its unswerving support for the Bush administration and the so-called “war on terror”.

Since his capture Canberra has sanctioned every violation of Hicks’s basic rights—and suppressed freedom of information action to reveal its collaboration with US authorities—while claiming that the young Australian is in good health and being treated well. The Howard government continues to deny mounting evidence from international human rights bodies, former US military prosecutors and other firsthand witnesses about the illegal activities in Guantánamo.

When the US Supreme Court eventually ruled in June 2006 that the Guantánamo Bay military commissions were unconstitutional and violated the Geneva Conventions, the Howard government reacted with calls for new charges against Hicks, claiming in advance that modified “kangaroo-courts” would be legally acceptable.

But the new commissions are virtually no different from their predecessors, including the use of hearsay and evidence extracted by coercion, and are designed to produce guilty verdicts.

US civil rights attorneys and defence lawyers for Guantánamo inmates have already begun legal challenges, which means that even if Hicks is charged in January, there is little chance there will be any trial within the next two years.

Hostile to the ongoing government lies, opposition to the Howard government’s treatment of Hicks has escalated over the past two years. It reached a new level in August with the national tour of Major Michael Mori, Hicks’s US defence lawyer. More than 50,000 signed petitions calling for Hicks’s release and thousands of people across the country attended meetings and rallies to hear Mori.

In the face of this movement, Ruddock and other cabinet ministers attempted to feign “concern” about the length of Hicks’s detention and claim to have told the Bush administration they want a “speedy resolution” to his case. These manoeuvres, however, have been combined with contemptuous and lying claims that Hicks’s ongoing incarceration is the fault of his lawyers because they challenged the blatant illegality of the charges and the commissions.

Labor’s role
The Howard government has only been able to get away with its blatant repudiation of Hicks’s basic rights because of the despicable role played by the “opposition” Labor Party.

Labor’s newfound criticism of Hicks’s treatment is completely bogus. Marching lockstep with Howard, it has enthusiastically endorsed the US-led invasions of Afghanistan and Iraq and the “war on terror” under which Hicks’s imprisonment and other attacks on basic democratic rights have been implemented.

Labor has had five leadership changes in the time that Hicks has been jailed and currently holds power in every state and territory. Not one leading Labor politician has demanded the immediate and unconditional release of Hicks.

Former federal Labor leader Mark Latham made the unprecedented and anti-democratic call for the introduction of retrospective anti-terror legislation so that Hicks could be tried in Australia. Kim Beazley, echoing Howard, insisted on a speedy US trial.

Prior to July 2005, when the Howard government secured a majority in the Senate, the combined Senate votes of Labor, the Greens and Australian Democrats were able to establish investigatory committees and block government legislation. But on all the essential issues relating to Hicks’s incarceration, Labor senators voted with the government.

Likewise, when Mamdouh Habib was released from Guantánamo in early 2005 and offered to provide firsthand information to the Senate about Australian involvement in his detention and rendition from Pakistan to Egypt, and then Guantánamo, this was rejected by the Laborites.

Beazley categorically opposed any Senate invitation to Habib declaring, “I’m not in the business of making this bloke a hero. He shouldn’t have opportunity to give evidence to a Senate committee and we shouldn’t waste a minute on him.”

While federal Labor’s former shadow attorney-general Nicola Roxon, South Australian Senator Linda Kirk and a few other Labor MPs have raised their voices about Hicks, their comments have invariably been directed toward advising the Howard government that Hicks could be tried under existing Australian legislation and jailed locally. Roxon and Kirk have publicly insisted that Hicks could be repatriated and placed under a police “control order,” a new measure that allows police to impose highly restrictive curfew and tracking conditions on any so-called terrorist suspect.

Last October, much publicity was given to the so-called “Fremantle Declaration” of state Labor government attorneys-general over the treatment of Hicks. The declaration, however, made no specific demands for Hicks’s release and consisted instead of a general “affirmation” of their commitment to the Geneva Conventions and other long-standing legal principles.

This was nothing but empty posturing. Under the banner of “fighting terrorism,” the state Labor governments have been active partners with the Howard government in reversing long-established legal principles, including giving state police the right to hold terror suspects without trial and without the right to even report their own detention. The federal government’s assault on these rights could not have been implemented without the state governments’ enabling anti-terror legislation.

Nor has Labor or any other of the so-called opposition parliamentary parties initiated legal action against the Howard government over its blatant attack on Hicks’s basic rights. That such action could be initiated was confirmed in early November in a special report by senior legal academics and lawyers, including Alastair Nicholson, Peter Vickery and Gavan Griffith.

In understated but direct language, the 29-page legal analysis made clear that Howard’s wholesale backing for the illegal treatment of Hicks constitutes a clear war crime under Common Article 3 of the Geneva Conventions and violates the International Covenant on Civil and Political Rights.

The document concludes: “We are further of the opinion that a trial conducted before a Military Commission established under the Military Commissions Act 2006 would contravene the standards of a fair trial under Australian law, namely the standards provided for in the Australian Criminal Code, and to counsel or urge a trial to take place before such a body with the requisite knowledge and intention would constitute a war crime under sections 11.1, 11.2, 11.4 and 268.76, alternatively section 268.31, of the Australian Criminal Code.”

David Hicks, who was returned to solitary confinement in March 2006, now suffers serious health problems, including back complaints and damaged eyesight, and is deeply traumatised. According to his father Terry, he was virtually incoherent for almost 30 minutes during their last phone call in July.

The ongoing imprisonment of Hicks, which is designed to psychologically destroy him, has further underscored the contempt for legal precedent and democratic rights that characterises the entire Australian political establishment.

"John Howard, he doesn't want (to) bring David Hicks here for so many reasons, because he's a good witness against the crime of the government overseas."

Finally, this Saturday December 9, you can join thousands of Australians nationwide to mark the fifth year of David's detention without trial. Peaceful protests are being coordinated by a coalition of action and human rights groups including Fair Go for David and Amnesty International, with key speakers at each event including Major Mori in Melbourne. Order your own Bring David Hicks Home sign and check out the details of a gathering near you.