I have attempted to formulate an email/letter to send to Tony Bliar which captures the nation's feelings regarding the latest BAE/Saudi scandal which he has now pulled the plug on. I wholeheartedly encourage everyone to reproduce and amend this letter as you see fit, and send it to him. This is a democracy, he needs to know what we think!

He can be contacted here! 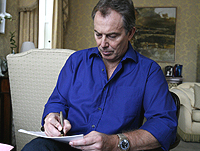 Look, he is ready and waiting to listen to us!

Words cannot express how sickened I am by your utterly disgraceful actions in forcing the Serious Fraud Office to end their investigation into the allegations of bribery and corruption between BAE systems and the despotic Saudi regime.

Now lets just look at what you said so we can all laugh at it:-

"Carrying on the investigation would harm intelligence and diplomatic co-operation with Saudi Arabia, in turn damaging the UK's national security."

You expect the 'rule of law' to apply to some but not to others; certainly not if they are rich, powerful, evil, and work for a major multinational company.

Arms manufacturers have been and will continue to be complicit in the supply chain of death, destruction, torture and genocide, and you do not give a flying f**k because duh, 'it's the economy stupid!'

So.. "No weight has been given to commercial interests or to the national economic interest". Really? This would be side splittingly hilarious if it wasn't so damn serious.

Despite the fact that UK companies voiced fears that they stood to lose other lucrative deals should the probe have continued?

And that the Al Yamamah contract with Saudi Arabia is thought to have been worth £40bn to BAE Systems over the past two decades?

And the job losses at BAE systems? Well I bloody well hope there are. The less people designing and manufacturing weapons to blow brown people to smithereens the better.

When are you going to stop rubbing your hands with glee every time you see an 'economic opportunity', and start giving a toss about the effects that your actions have on ordinary people the world over, and not your rich and powerful friends.

Stand up from your desk right now and go and bang your f**king head against the wall you stupid c**t.