piquet against repression in chile

In support of all the political prisoners mapuche. 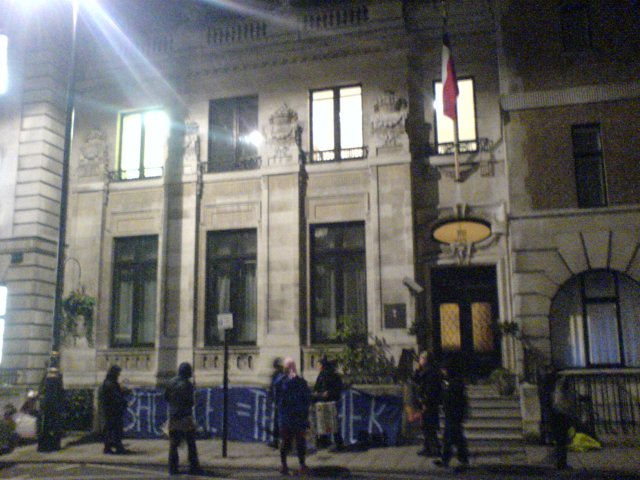 Land and freedom to all political prisoners

Today at around 5.30 there was a demo in front of the chilean embassy.
A samba banda arrived and hung up banners claiming land and freedom for all the political prisoners mapuche. And comparing the president of chile Michele bachelet with Margareth Thatcher.

Everything was ok, except for some washing up liquid thrown from the embassy onto the demonstrators.
That´s the way the ambassadors deal with people demands nowadays.
Police arrived later, but didn´t provoke any hassle, appart from not allowing to display the banner on the chilean embassy, but yes in the house right opposite to it.

The members of the embassy were leaving the embassy and seemed to be quite annoyed of realising that people in london are not happy with the way the president of chile is dealing with the hunger strike of young mapuche Waiquilaf Cadin Calfunao, who is now in his 79th day of not eating. Basically Michelle Bachelet, following Margaret Thatcher method with hunger strikers, is doing nothing about it.

The state of represion in chile is growing day by day under the blooded democratic flag.
For the people, and specially the indigenous communities, it is the same or even worst to have Pinochet, Bachelet, or any other et who is only going to serve the interests of few rich people and families that control and destroy anything they put the hands on.

For these reasons the members of the embassy were insulted and called murderers as they didn´t even have the dignity to come and give at least their point of view in this situation.