Protestors march toward Wall street Thursday, Dec. 21, 2006 in New York. Several hundred people demonstrated near Wall Street on Thursday to protest the shooting of an unarmed black man by police officers in Queens. The march in Manhattan's financial district was the latest in a series of protests over the death of Sean Bell, who was killed last month by a fusillade of police bullets as he left a Queens nightclub hours before he was to be married. 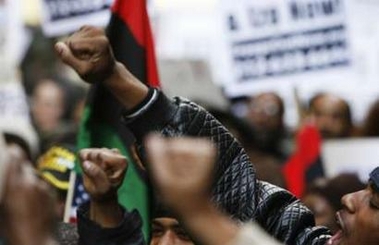 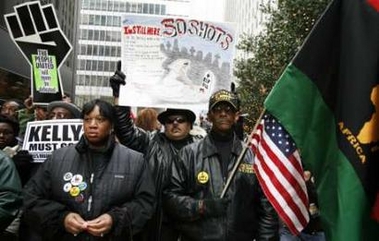 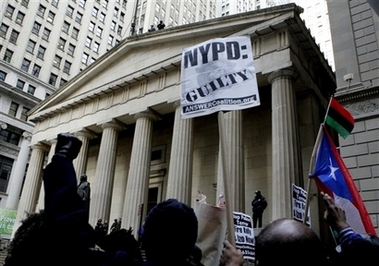 Photo 1 *- A demonstrator holds his fist aloft while marching through the financial district of Manhattan to protest the November 2006 New York City police shooting death of Sean Bell in New York December 21, 2006.

Close to 1,000 people descended on the Wall Street area on Dec. 21 at noon for a militant march against racist brutality by the New York Police Department. The protest was sparked by the shooting death of unarmed 23-year-old African American Sean Bell by the NYPD a month earlier on the same day his wedding was to take place. Trent Benefield and Joseph Guzman were wounded when the police shot 50 bullets into a car driven by Bell after the three left a bachelor party for Bell in the borough of Queens.

The demonstration, overwhelmingly composed of African Americans, was organized by the December 12 Movement and the Black Men’s Movement. Latin@s and whites also came out on Dec. 21 in solidarity with the Black community’s righteous anger over another unprovoked killing by the police. The crowd included many young people.

Before the crowd stepped off from the Chase Building near the World Trade Center, Amadi Ajamu from the Dec. 12 Movement led militant chants such as “Black power,” “Power to the people,” “No justice! No peace!” and many more. Roger Wareham from D12 and New York City Councilperson Charles Barron spoke to the multitude of local and national electronic and print media.

Wareham announced a march to the United Nations on Jan. 29 and a conference on police brutality on Feb. 21, the anniversary of the assassination of Malcolm X. He also linked the unimaginable wealth controlled by Wall Street investors to the oppression of Black people, including the fact that African slaves built New York City and their ancestors have still been denied reparations. Wareham also compared the racist occupation of the Black community by the NYPD to the U.S. military occupation and war against the Iraqi people.

Throughout the almost three-hour demonstration, the crowd repeatedly counted from one to 50 to signify how many shots the police had fired, riddling Bell’s car.

The NYPD tried to intimidate the crowd. Police, some on horseback, were dressed in riot gear, dangling plastic handcuffs from their belts. But to no avail. Even though the large crowd had to wait a long time and then march through side streets to get to the heart of Wall Street, they did not back down.


Once they had gathered near the steps of Federal Hall, where a statue of the racist slaveholder George Washington stands, D12 leader Viola Plummer and Barron fired up the protesters with speeches beseeching them to continue to come out in the streets until Police Commissioner Raymond Kelly is fired.


Photo 3 ***- Protestors gather near Federal Hall on Wall street, Thursday, Dec. 21, 2006 in New York. Several hundred people demonstrated near Wall Street on Thursday to protest the shooting of an unarmed black man by police officers in Queens. The march in Manhattan's financial district was the latest in a series of protests over the death of Sean Bell, who was killed last month by a fusillade of police bullets as he left a Queens nightclub hours before he was to be married.