A couple of months back, some people protesting against landfill at Hafod Quarry in North Wales wore Halloween masks and blockaded the gates. One of the protesters has now been issued with a fixed penalty notice under Section 5 of the Public Order Act 1986. 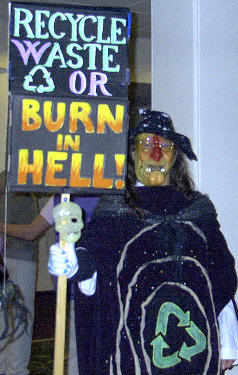 OK, own up! How many of you have ever worn a Halloween mask? How about your children or grandchildren? We suggest you collect up all such masks and recycle them forthwith or hide them and hope that there's a mask amnesty sometime soon. The police are onto you!

A protester against landfill at Hafod Quarry, near Wrexham in North Wales, has this week been issued with an £80 fixed penalty notice for an alleged offence under Section 5 of the Public Order Act 1986 which took place two months ago. The notice states that he, "along with others blocked gate at Hafod quarry preventing lorries from leaving whilst wearing Halloween mask causing harassment, alarm and distress to drivers and staff."

One of the protesters present on that morning, a week or so before Halloween, describes a scenario where protesters wearing Halloween masks peacefully blockaded the gates while some wagons were inside. They stood silently in front of the gates until the police arrived, at which point and without being asked, they removed their masks and ended the blockade. The police made no mention of the masks at the time, nor did anyone mention being alarmed or distressed. Only one of the masked protesters appears to have been issued with the penalty notice.

Issuing a fixed penalty notice is at the discretion of the police officer. It is entirely possible that notices may be issued for cases which would not stand up in court, and the CPS may choose not to pursue the case if the accused refuses to pay the penalty fine and opts instead for the case to be tried in court. According to Freebeagles web site, "the Home Office notes state that with regard to Section 5 offences, the police should consider giving a warning first and that also they should bear in mind the statutory defences to Section 5. These include the defence that your conduct was reasonable and that you were not aware that your conduct was 'threatening, insulting or abusive'. Reading between the lines, it seems that the Home Office are not keen on the police issuing fixed penalties for each and every instance of minor disorderly conduct. But the guidance notes are not legally binding and ultimately it is a matter of discretion for the individual officer."

There are so many new laws being passed, and new interpretations of old laws by the police, that it's hard to keep up. We know that loads of people wear masks at Halloween. What we need to know is how many other people around the country have been issued with fixed penalty notices for this heinous offence.

Pictured is a protester in a Halloween mask at a Wrexham County Borough Council meeting to discuss incineration in 2005. No fixed penalty notice there...