"Naturally, Niyazov was on the same "target list" as Mahmoud Ahmadinejad, Hugo Chavez and Saddam Hussein, the other foreign leaders whose only real crime is that they control vital supplies of dwindling resources. This puts them at odds with the American oil giants whose plans to expand their corporate empire throughout Central Asia and the Middle East is now a matter of the public record." 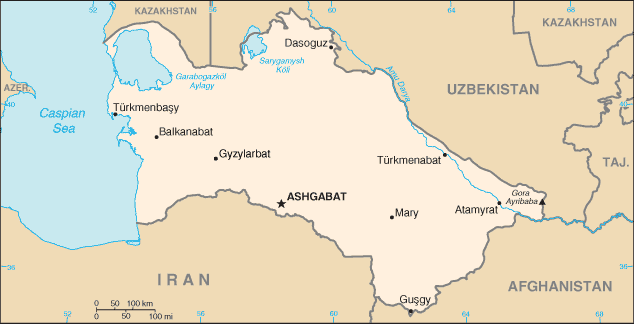 Was the Bush administration involved in the death of Turkmenistan’s President, Saparmurat Niyazov?

After all, Niyazov met all the criteria for Bush’s policy of "regime change". He controlled massive natural gas reserves and he refused to take orders directly from Washington. Typically, these are the only factors that are weighed when considering whether a change of leadership is in order.

Naturally, Niyazov was on the same "target list" as Mahmoud Ahmadinejad, Hugo Chavez and Saddam Hussein, the other foreign leaders whose only real crime is that they control vital supplies of dwindling resources. This puts them at odds with the American oil giants whose plans to expand their corporate empire throughout Central Asia and the Middle East is now a matter of the public record.

Turkmenistan has reserves which amount to 22.5 trillion cubic meters, the second largest supplies in all of Asia. At this point nearly all of Turkmenistan’s gas is pumped through Russian energy giant Gazprom’s pipelines. As economist Mikail Delyagin said, "Because of Gazprom’s mismanagement, the European part of Russia cannot exist without Turkmen gas. Control over it is a categorical imperative for Russia’s development during the next 10 years". (Victor Yasmann RFE/RL Current Affairs)

Disruption of supplies from Turkmenistan would be a severe blow to Gazprom’s economic vitality.

The Bush team wants to build a pipeline under the Caspian Sea to pump natural gas reserves to the West through Azerbaijan, Georgia, Turkey and out the Mediterranean corridor or down through Bush’s "new colony" in Afghanistan through Pakistan to the coast. If the Bush plan goes forward it would be a major setback to Gazprom which depends on Turkmenistan’s gas to supply Ukraine and Europe. As Stratford says, "Without those shipments, Russian state energy firm Gazprom would find it impossible to satisfy both domestic Russian natural gas demand and fulfill its export contracts to Europe and Turkey".

It would also sabotage Niyazov’s prior commitments to China which has signed contracts for a pipeline to bring natural gas through Uzbekistan and Kazakhstan. China’s future depends heavily on Turkmenistan. According to Alex Nicholson of the AP, "Niyazov promised to pipe 30 billion cubic meters of gas beginning January 2009. (China) also won an invitation last month to tap the giant Iolotan fields, which the late president declared, contained 7 trillion cubic meters of natural gas—or more than even Saudi Arabia’s proven reserves."

No wonder the Bush administration is paving the way for intervention.

At the very least, Niyazov’s death has turned out to be another "great opportunity" for Uncle Sam and it looks like Bush may have already put the pieces in place to take full advantage of it.

For example, as soon as Niyazov’s death was announced, his second in command, Ovez Atayev, was removed from power by Deputy Prime Minister, Gurbanguly Berdymukhammedov, under trumped charges of "harassing and humiliating his daughter in law" or some other such nonsense.

So, now the president is dead, his successor is under indictment and there are reports that a number of prominant ex-patriots will soon be returning to Turkmenistan to take part in the political "free-for-all".

Haven’t we seen this performance before?

If thirevolutions which were orchestrated by American NGOs and American intelligence agencies, we can see that (despite the planning and huge commitment of financial resources) they accomplished nothing of lasting value. Ukraine and Kyrgyzstan are back within Russia's orbit and Georgia will soon follow. (or freeze to death in the cold without access to Russia's natural gas)

Eurasia is Russia and China’s backyard and they’ve build up the necessary defenses to keep Washington out. Bush can waste-away in Afghanistan for another 5 or 6 years dreaming of "victory", but his "Grand Plan" for the region is basically in ruins. The United States will not prevail in Central Asia any more than it will in Iraq.

Nevertheless, the plan is going forward and Bush apparently has the requisite agents in place to give him hope for success. According the RIA Novosti, "Many people in the former president’s inner circle were oriented towards Europe."

The power struggle is bound to be ferocious and Washington will be right in the "thick of it". At this juncture, Bush has no choice but to pull out the stops and do everything in his power to establish an American client in Turkmenistan. The geopolitical stakes are too high to ignore. The country is perfectly situated between Russia and Iran on the Caspian Sea, the epicenter of the world’s remaining resources. In fact, the Pentagon’s own maps show Turkmenistan at the very center of CENTCOM’s global resource war; a pivotal location for military installations and pipeline corridors. It provides ready-access to an estimated 2 trillion in oil reserves in the Caspian Sea, as well as the massive natural gas supplies. At the same time, a change of leadership could block arch-rival Gazprom from extending its dominance throughout the region by handing over control to western energy corporations.

This is not a battle that the Washington warlords can afford to lose, but victory will not come easily. Neither Iran nor Russia can allow Bush to take over Turkmenistan without a fight. Iran would be surrounded on all sides by the US and cut off from its neighbors to the north by hostile American forces. At the same time, US military bases would be set up even closer to the Iranian capital of Tehran.

For Russia, an American client in Turkmenistan would be a stiff challenge to its role as the region’s superpower; creating the looming possibility that NATO would get an even bigger foothold in Central Asia and threaten the delicate balance of power.

Turkmenistan is a key piece in the new "Great Game"; the ongoing struggle for dominance in Central Asia. Whether Washington played a part in Niyazov’s untimely death or not is almost irrelevant. The Bush-Cheney oiligarchy have demonstrated a willingness to fight-to-the-death for every thimbleful of oil or natural gas left on planet earth. This makes the likelihood for a sudden eruption of violence Turkmenistan all the more probable.

As the weeks and months go by, we can expect to see the usual trappings of US involvement; the CIA-funded public demonstrations, the American-friendly "democracy promoting" coverage in the media, and the comical parade of ex-patriots who matriculated in US right-wing think tanks. The whole charade is being cobbled together as part of the failed strategy to control the world’s remaining resources.

The faces may vary, but the routine is always the same.s sounds like a script written in Washington, it’s probably because it was. Most of Bush’s stooges in Iraq were assembled outside of the country before the 2003 invasion and still have the administration’s unfailing support. The upcoming circus in Turkmenistan will probably be more of the same.

The media, of course, has played its traditional role of championing Washington’s interventions by demanding "free elections"; another comical part of the Bush-kabuki which never seems to change. Turkmenistan has no history of free elections, but the western press can be expected to follow the directives of their political overlords who will doubtless insist that Turkmenistan participate in Bush’s "Global Democratic Revolution". (excluding democratically-elected Hamas, of course)

But Bush is facing fierce headwinds in Turkmenistan. If we look back at the "color coded"