Radio 4 is running a Christmas Repeal listener vote, and the Serious Organised Crime and Police Act (SOCPA) is one of the candidates. Steve Pound, Labour MP, was on the Today programme this morning talking a load of bull about SOCPA, but he was forced to admit that Maya Evans and Milan Rai should not have been convicted under the Act. This jolted me out of my apathy to go and vote and to send a comment to Today (below). 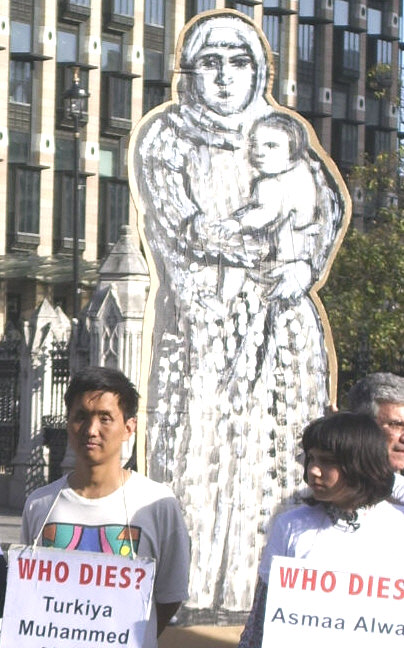 You can vote here:

At the moment, you can go and listen again to the clip from the Today website, but I'm not sure how long the clips stay up.

Stephen Pound MP, in defence of the Serious Organised Crime and Police Act (SOCPA), said on your programme this morning that SOCPA should probably not have been used to convict Maya Evans and Milan Rai for reading out the names of Iraqi civilians and British soldiers who have died in Iraq.

Mr Pound is clearly not aware that Maya Evans and Milan Rai appealed these convictions, and their appeals have been turned down by the High Court. Further, both have this month been charged again under SOCPA for... reading out the names of Iraqi civilians and British soldiers who have died in Iraq. Both have been charged with organising and taking part in an "unauthorised" demonstration within the "designated" area around Parliament in October this year.

A person found guilty of organising such a demonstration may be fined and sent to prison for 51 weeks.

Please will you find out, in light of the above, whether Mr Pound is still prepared to support this ridiculous law? Thank you.