The next critical mass bike ride in Manchester is Friday 29th December
We suspect lots of santa's will be on bicycles! 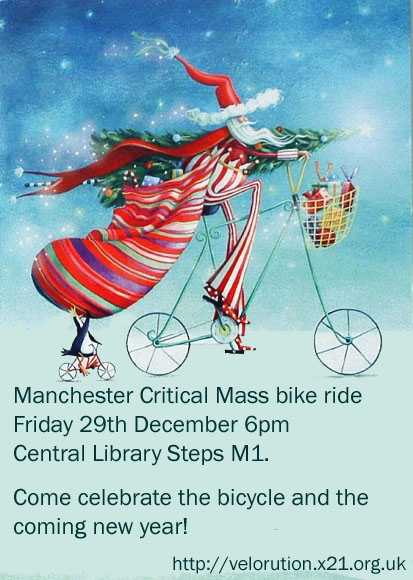 It's for anyone that rides a bike;
Its a celebration of getting round the city without polluting it;
Its about every journey being an adventure instead of just sitting on a boring bus or in a stressful car;
Its about cyclists riding together to demand more respect from other road users;
Its a way to meet other cyclistas;


The next manchester critical mass cycling club bicycle ride will be on Sunday January 28th (the sunday after Jan CM)
There will be two parts to the ride. If you want a real long ride then meeting in Manchester to ride out to the peaks. If you want less of a long ride then catch a train with your bike to the peaks and we'll all meet for a nice ride and lunch. Details will be posted here very shortly.