Left in the Desert: Hundreds of Refugees Arrested and Deported from Morocco

Over 250 Sub-Saharan Africans have been arrested by the Moroccan authorities in raids that took place in different quarters of Rabat on December 23rd, 2006. Among the arrested were women and children refugees and asylum seekers. Six buses, accompanied by the army, then carried them to Oujda on the Algerian borders. At about 11pm, the buses crossed the border at 3 different points and the migrants were left in the middle of nowhere [see below for details]. Blockades by the Special Police prevented supporters from Oujda to reach the deportees and their mobile phones did not work, so they could not be contacted. There are fears that these arrests are only the beginning of a mass deportation campaign to Algeria, or even into the desert, similar to what happened in September-October 2005.

On December 25, two more buses arrived in Oujda, at the police station, with Sub-Saharan Africans from Nador (another town in Morocco). This only confirms that the 'operation' was nation-wide and pre-planned by the authorities, during a time when most of the activists were on holiday. 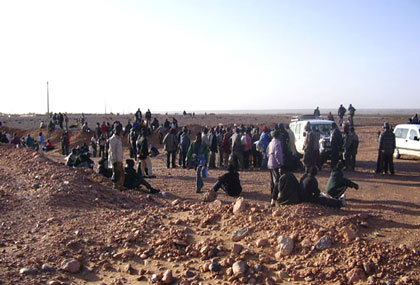 According to reports by Attac Morocco and other organisations, some 150 migrants, many injured, managed to return to Oujda by the evening of the 24th, while between 100 and 150 people were still "out there in the cold and rain, with no food". When arrested, they were not allowed to take their belongings, meaning some had to go in their underwear. Among them are said to be 7 or 8 children (4 under 2) and 2 pregnant women into their 5th and 7th month, as well as sick people who were refused medecine. It is worth mentioning that at least 52 of them had UNHCR documents, and another 17 cases were still being processed. One special case is said to be a Senegalese businessman who had been living in Morocco legally since 2004.

As of 24 December, 5 migrants were still being detained at the police station in Oujda, without any reasonable explanation given as to why it was these five in particular. There were also reports about two Congolese migrants, Nsiku Yulu and Muntu Dimuru, who were taken into custody by the Algerian police. At about 9:30pm of that day, 35 people were 'located' and 2 more were arrested.

On 30 December, a new caravan was raided in Layoun, on the way to Oujda, and all 140 people were deported towards the Algerian border. There were activists from human rights groups and Attac present. They were trying to bring people back to Rabat but, out of 54 people, only 4 could make it.

Another worrying report said 4 women were raped by Moroccan or Algerian men, and that migrants were beaten with whips and sticks by the Moroccan police and the Algerian border police.

On 10-11th July, 2006, Morocco hosted the Ministerial Euro-African Conference on Migration and Development. One of the main topics was the "cooperation programs" relating to the "management of legal and illegal migration". As Gregor Noll wrote in Open Democracy, "the Rabat conference might be remembered as the occasion when some African governments sold out this human right at the behest of Europeans, in return for conditional development assistance." (See also this EU memo on 'illegal immigration', issued a few days after the Rabat conference). According to the CNN, Morocco received 76 million Euros ($100m) from the EU in August 2006 to "help manage migration, boost border security and crack down on human trafficking."

In a conference preceding the above-mentioned ministerial conference, NGO's agreed on what was called the Rabat Manifesto (pdf). Among other things it said: "We share indignation about the war that is increasingly being waged along the Mediterranean and Atlantic coastlines. We refuse the division of humanity between some who may freely move about the planet and some who may not. We also refuse to live in a world where borders are more and more militarised, dividing our continents and trying to transform every group of countries into a fortress."

After these latest arrests, a statement by the Wali (governor) of Rabat said that this operation came within the framework of "Morocco's duties" promised at the mentioned conference. Judging also from the way this was portrayed on national TV, it seemed to be a well-prepared and well-organised operation, with cameras present and buses with the same colour, apparently owned by the same company. Moreover, the fact that this happened during the Christmas holidays, when many of those responsible were on vacation and could not be reached, is no coincidence.

There is also a 'media war' going on in Morocco between the authorities and NGO's that support migrants. According to the Council of Subsaharan Migrants in Morocco, whenever these try to inform the international public about the ongoing human rights violations, the authorities claim that 'illegal' migrants have attacked the Ceuta and Melilla fences and use that as an excuse for arrests and deportations (see this pdf report).