In the latest Israeli act of aggression, a large force invaded the West Bank city of Ramallah yesterday afternoon, with at least 30 military vehicles accompanied by bulldozers and helicopters. 4 Palestinians were killed (6, according to another report) and at least 20 were wounded, 3 of whom were described as serious. 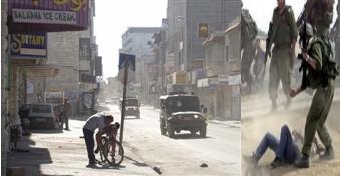 Four Palestinians were killed and at least 20 were wounded in the clashes, three of which were described as serious. One of the killed was identified as Yousef Abdul Qader, 23, Palestinian sources reported.

The source said that a large Israeli force invaded the West Bank city of Ramallah on Thursday afternoon accompanied with bulldozers, a number of military vehicles and border police, and backed by Helicopters.

Troops opened random gunfire and tear gas canisters forcing the residents who were doing their shopping. Army jeeps and bulldozers surrounded a building claiming that a wanted Palestinian is hiding there.

Palestinian resistance fighters and rock throwing youth, clashed with the invading Israeli troops who took position in the Manara Square, in the city center, causing serious damage. Bulldozers also damaged a large number of cars parked at the roadsides.

Soon after the army withdrew, thousands of residents took to the streets in a large demonstration.

Palestinian medical sources reported that during the invasion, the ambulances and medics are unable to reach the occupied area.

Fadi Al-Arouri, a journalist works for Maan News Agency, was wounded in the head by Israeli troops.

Media sources reported that prior to the military invasion; undercover Israeli agents entered Ramallah in bid to arrest a claimed wanted Palestinians, however they were revealed by local residents.

Apparently, the undercover agents called for backup with brought this large force to the city.

Palestinian sources said the target of this operation was wounded, but was not captured by the Israeli army.

In a separate incident, Israeli troops invaded the West Bank city of Bethlehem and surrounded a house on the Bethlehem-Hebron road. One Palestinian was wounded identified as Mohammad Abu Zeid.

Eyewitnesses said Abu Zeid has been detained after he was injured.

Israeli forces stormed the central West Bank's Ramallah late Thursday afternoon with at least 30 military vehicles under the cover of helicopters. Members of the armed resistance arrived in an attempt to stave off the invasion.

Palestinian security sources report that the Israeli invasion targeted a member of the Fateh linked armed resistance wing Al Aqsa Brigades. No arrests were made.

After the Israelis withdrew, Ramallah residents crowded the area shouting against the occupation and for Palestine.