Green Seniors is pleased to recognize the environmental work of Erwin “Erv” Klaas, our featured Green Hero. Erv is Professor Emeritus of Animal Ecology at Iowa State University, Ames, Iowa. To the people of Ames, he is known as the person who spearheaded the effort that safeguarded our city water supply and created a beautiful city park for all to enjoy. 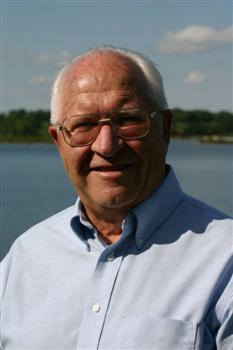 Erv developed his love for nature and the outdoors in childhood. A family friend was a professional conservationist who inspired Erv with stories of the Alaskan wilderness. It was only natural that he chose to enter the field of animal ecology. One of his first areas of research was the effect of pesticides—DDT—on birds.

When Erv retired in 1999, he immediately became involved in a hot controversy in town. A developer had purchased an old, water-filled quarry just north of the city and wanted to build water-front homes all around it. The city water department depended on that billion-gallon body of water to re-charge the aquifer that supplied the city wells, and had done so in the droughts of 1977, 1981, and 1988. By pumping the quarry water into the dry Skunk River, the shallow aquifer beneath it could be replenished. Home development would discharge nitrogen and phosphorous into the quarry lake, causing algae blooms and spoiling water quality.

Erv’s first effort was to work with the Ames City Council to prevent annexation of the land, thus stopping the developer’s plan. He helped educate, inform, and persuade people as to the benefits of saving the water supply and with it, of having a lovely lakeside park. A compromise was worked out with the developer, who was allowed to develop a small area of 24 acres in a less environmentally sensitive area near the lake.

Erv’s next effort was to help raise funds to purchase the land (307 acres) and lake (130 acres) from the developer and turn the quarry into a natural setting. A bond issue to raise nearly five million dollars was passed by 86 percent of voters. Once the lake was secured for the city, Erv obtained funding from the Iowa Department of Natural Resources to protect the lake from agricultural runoff. Farmers of land in the lake watershed were paid for using less fertilizer for five years. After the five years elapsed, they continued the practice because it was shown to be effective in reducing production costs and saving money. Grass waterways and other control structures were put in place to reduce soil erosion and sedimentation.

Some of that agricultural land has since been bought up by developers, though for now it is still farmed. Erv’s next concern will be to encourage “low-impact” development strategies on that land, as he feels that with the parkland buffer of native prairie, homes can be built nearby without polluting the lake if proven strategies are utilized.

Obviously you have had many successes. Do you ever get discouraged?

“Oh yes, all the time. But I fight that frustration by being active in the outdoors, hiking and watching nature.”

What advice do you have for other retired people who want to help?

“Get involved! Start watching what is going on in your local community. I’ve found no end to the things that can be done.”

Having gotten acquainted with Erv, it is plain that all a person need do to become involved in Ames is to let Erv know that they want to—Erv and his network of volunteers will find suitable tasks while providing support and camaraderie!

Erv found success as a volunteer because he was able to work with community leaders and townspeople. With Iowa State University being a part of the Ames community, being a university professor is commonplace and in itself does not impress.

Having the passion and the persistence to work out the solutions mattered as much as Erv’s scientific knowledge of the situation. Erv knew how to form alliances and win people over. In the end, many entities worked on the park, but they acknowledge Erv Klaas’s pivotal role and superb leadership.

Erv’s strategies of educating, negotiating, and alliance-building can work for other Green Seniors in other communities. If some public officials can be recruited to the cause early on, there is a reasonable chance of success with these strategies. However, success rarely comes without an enormous amount of hard work. We can’t all be like Erv, but we can all support the Green Seniors out there who are doing good works for our environment.