Of course you know Ricky Tomlinson from his roles in the Royle Family and Brookside. But you may not know he was one of the Shrewsbury pickets imprisoned in the 1970s for 'conspiracy to intimidate' during a building workers dispute. Well now Ricky has donated £1,000 to a campaign for a public inquiry into the blatantly dodgy arrests, trial, and imprisonments. He will also be presenting a TV documentary later this year in a bid to raise awareness. 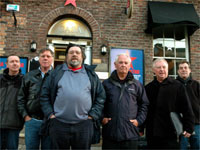 Later this month, Tomlinson will join Arthur Scargill at a meeting in Shotton, North Wales, which will be filmed as part of a TV documentary which he hopes will raise awareness of the stitch-up which ultimately cost the life of his fellow defendant, Des Warren.

At the beginning of the 1970s, the poor safety record and low wages was creating anger amongst unionised workers in the construction industry. Non-unionised workers were subjected to a system known as ‘the lump’ – cash-only payment in a lump sum, without any security or employment rights. The Union of Construction, Allied Trades and Technicians (UCATT) proposed a ‘builder’s charter’ – guaranteeing a 35-hour week, a wage of £1 an hour, improved safety and pensions.

The building industry – lead by companies such as McAlpine’s and Laing’s – were terrified by this threat to their profits, as were Ted Heath’s Conservative government. Against the background of the Vietnam War and emerging protest movements, the ruling class was worried alternatives to capitalism gaining popularity. In fact Lord McAlpine was treasurer of the Tories, so he was doubly worried!

The unionised workers began to use ‘flying pickets’ as a tactic to win the lump workers around to their cause. Among the leaders were Des Warren (who worked in Ellesmere Port for a time) and Eric (‘Ricky’) Tomlinson.

On September 6 1972, coachloads of UCATT and Transport and General Workers Union members from North Wales and Chester went to the market town of Shrewsbury to assist trade union members there, by picketing the sites. At one place they were greeted by the son of one boss brandishing a shotgun, at another site a building company director challenged Des Warren to a fight, but by the end of the day when the men set off for home they felt it hadn't been a bad day's union work, and there had been no trouble with the police.

Six months later – with the conflict between strikers and government intensifying – the authorities took vicious retribution and recrimination. Warren and Tomlinson were arrested in connection with the Shrewsbury events (along with twenty-two others), and charged with unlawful assembly, affray and conspiracy to intimidate. After a bizarre and blatantly unfair trial, they were found guilty of the conspiracy charge by the capitalist state and a middle class jury.

Warren received three years in prison, and Tomlinson got two years. They became known as the ‘Shrewsbury Two’, and a campaign was launched to set them free. But if the trial had been a deliberate conspiracy of the Employers' Federation, government and state, then the campaign saw a conspiracy by leaders of the Labour Party, the TUC and UCATT to limit the threat to the profit system. Workers were told to vote for a Labour government, but when they got one Harold Wilson and James Callaghan refused to cut short Warren’s sentence or launch an inquiry. Callaghan’s government began the attack on workers’ rights that was accelerated by Thatcher and is still supported by Blair, Brown, and almost every politician you are likely to see on the news.

Warren, who wrote his memoirs 'The Key To My Cell' , was later diagnosed with Parkinson’s disease, and campaigners believe it was his treatment at the hands of the prison authorities that gave him the illness. He died from pneumonia, aged 66, in April, 2004.

Ricky told the Liverpool Echo: “We are calling for a public inquiry because we want people to know what we all went through – and to clear our names.”

Campaign secretary Mick Abbott added: “This latest event will give the campaign fresh impetus and we expect it to be followed by meetings in Manchester, London and other parts of the country.”

Ricky will speak at The Grosvenor, Nelson Street, Shotton, at 7.30pm on Friday January 26. For tickets – £5, including a buffet – contact Mick Abbott on 07907 307 853.
In Liverpool today, the preparations for the Capital of Culture mean there are construction workers everywhere, but conditions in the industry have not improved since the defeat in the 1970s. The time has come for a new generation of Des Warrens to learn from the mistakes of the past and to organise for a free and fair future.

http://www.indymedia.org.uk/en/regions/liverpool/2006/08/346963.html to read a report and see photos of last summer's campaign launch.