Following on from yesterdays protest by academics from across the world and students from Oxford, Cambridge, Sussex and Edinburgh Universities, today seen elected representatives from across the political spectrum converge on Faslane in protest against nuclear weapons. 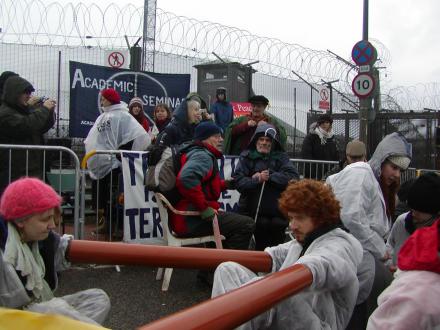 students lock on the road as academics give seminars 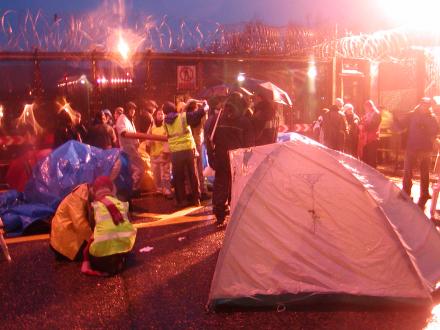 tents erected on the road 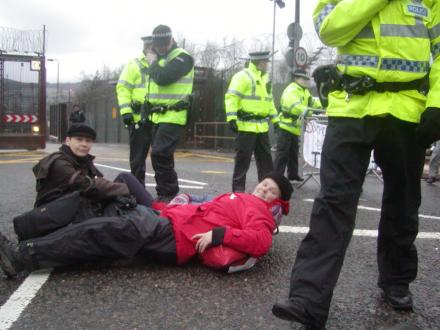 Yesterdays protest seen academics hold seminars on papers they had researched on the subject of nuclear weapons, which started on the pavement but eventually moved onto the road. Overwhelmed by sheer numbers, with over thirty students and roughly fifty academics, the police had no option but to leave protestors blocking the main entrance to the nuclear base. When it was clear that police were in no position to clear the road any time soon, and due to the cold temperatures and heavy rain, protestors erected tents, set up a tea table with a gas powered urn and eventually brought a brazier and light a fire in the main road. After five hours Strathclyde police managed to mobilise enough officers and along with roughly twenty MoD police officers spent a further hour clearing the road of people. Protestors managed to keep the gate blocked for just over six hours and five minutes, which works out as three-hundred and sixty five minutes, an obviously significant record for the Faslane 365 project. There was a total of seventeen academics and eighteen students arrested.

Today elected representatives from across the UK and Europe turned out at Faslane to once again protest against nuclear weapons. Politicians from Labour, SNP, SSP, the Green Party and Solidarity along with supporters gathered at ten o’clock to add to the growing protests against nuclear weapons. Krista van Velzen, an MP from Holland, urged police to join the protestors and uphold international law by arresting those who worked on Trident instead of those blockading. She reminded them of German police officers who recently blockaded trains carrying nuclear waste. SSP MSP Rosie Kane pointed out the hypocrisy of the UK government putting pressure on other countries over nuclear weapons, and yet they are preparing to replace the Trident submarines with a possible cost of £76 billion.

After speeches seven elected representatives and two other supporters moved onto the road and blocked traffic. They were Krista van Velzen (Dutch MP, Socialist Party), Carlyn Leckie, Rosie Kane, Frances Curran (MSP’s for the SSP), Leanne Wood (AM, Plaid Cymru), Jill Evans (MEP, Plaid Cymru) and Carolyn Lucas (MEP, Green). The two supporters were Brian Quail and Harry McEachan. They were taken to Clydebank and Dumbarton police stations and were released later this evening without charge. These last two days take the total arrests at Faslane since the start of Faslane 365 to four hundred and seventy three, with sixty one days of presence.