11.30 am SATURDAY 10 FEBRUARY 2007 // DEMONSTRATE OUTSIDE HARMONDSWORTH AND COLNBROOK DETENTION CENTRES NEAR HEATHROW 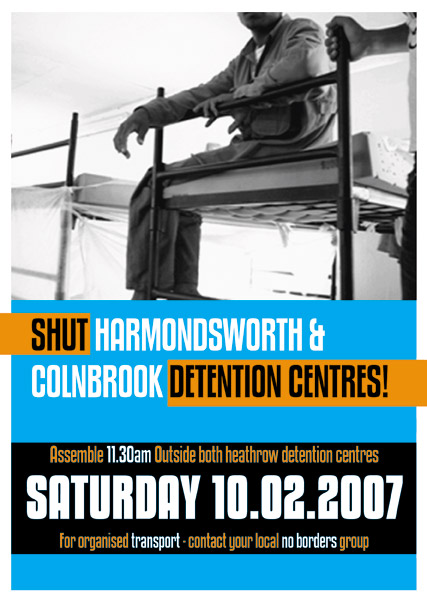 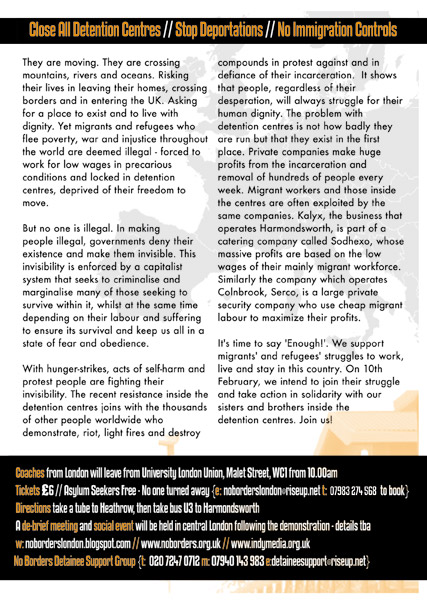 They are moving. They are crossing mountains, rivers and oceans. Risking their lives in leaving their homes, crossing borders and in entering the UK. Asking for a place to exist and to live with dignity. Yet migrants and refugees who flee poverty, war and injustice throughout the world are deemed illegal – forced to work for low wages in precarious conditions and locked in detention centres, deprived of their freedom to move.

But no one is illegal. In making people illegal, governments deny their existence and make them invisible. This invisibility is enforced by a capitalist system that seeks to criminalise and marginalise many of those seeking to survive within it, whilst at the same time depending on their labour and suffering to ensure its survival and keep us all in a state of fear and obedience.

With hunger-strikes, acts of self-harm and protest people are fighting their invisibility. The recent resistance inside the detention centres joins with the thousands of other people worldwide who demonstrate, riot, light fires and destroy compounds in protest against and in defiance of their incarceration. It shows that people, regardless of their desperation, will always struggle for their human dignity.

The problem with detention centres is not how badly they are run but that they exist in the first place. Private companies make huge profits from the incarceration and removal of hundreds of people every week. Migrant workers and those inside the centres are often exploited by the same companies. Kalyx, the business that operates Harmondsworth, is part of a catering company called Sodhexo, whose massive profits are based on the low wages of their mainly migrant workforce. Similarly the company which operates Colnbrook, Serco, is a large private security company who use cheap migrant labour to maximize their profits.

It’s time to say ‘Enough!’. We support migrants’ and refugees’ struggles to work, live and stay in this country. On 10th February, we intend to join their struggle and take action in solidarity with our sisters and brothers inside the detention centres. Join us!

Directions: take a tube to Heathrow, then take the U3 bus to Harmondsworth.

A de-brief meeting will be held in central London following the demonstration. No Borders will be putting on a benefit gig in the evening. Food and drink will be available.

...catching up with the image in the leaflet? According to detainees inside there are about 60 detainees crammed in what used to be the Health Care, up to 10 in a room, the sick mixed up with the healthy, which favours the spread of communicable diseases. The food is unedible and many detainees are on medication for stomach, if they don't take the medication they can't digest the food. Most of them had never stomach problems before. There is a makeshift library in what used to be the church, it only opens for a few hours a day, than they take away books and newspapers and the place becomes a church again for a couple of hours...The lack of facilities and meeting spaces adds to the desolation, and many people sleep all day because there is nothing else to do.
(apologies for previous post, which is incorrect according to up-to-date information and refers to the situation in Harmondsworth before the latest riots)

One week before the demonstration we meet at the Vortex Social Centre, Stoke Newington 139-141 Church Street.
From 6.30 short films, cafe, workshops, banner making.
A workshop on visiting and supporting detainees starts at 7.00pm. Come if you want to get involved.
From 8.00pm: films (noborders demo against Harmondsworth and Colnbrook last year and more)///
ex-detainees speaking /// open discussion.

From 9.30 benefit night.
Have confirmed so far:

The first part of the evening is free for all, the second donations £ 5 / 3, free for refugees .
All money raised goes to support people in detention.