The prime minister is able to get away with this only because of the pro-war stance of the Australian media and the opposition Labor Party. Every newspaper, ranging from the Murdoch press to the “liberal” Sydney Morning Herald and Age, today published editorials supporting Bush’s plan, albeit with certain tactical concerns. 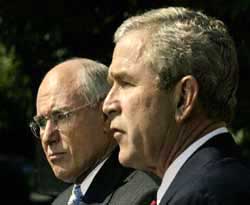 Within hours of yesterday’s announcement by US President George Bush that an additional 21,000 troops will be deployed to escalate the war in Iraq, Australian Prime Minister John Howard held a press conference to announce his unqualified support. Bush had briefed Howard on his new strategy in a 20-minute telephone conversation on Wednesday and the Australian prime minister immediately assured him of Canberra’s backing. The Howard government’s position serves to underscore its direct complicity in the Bush administration’s war crimes in Iraq and the Middle East.

Bush’s new strategy defies last November’s mid-term election outcome which clearly expressed the will of the American people to end the war. The change of course represents a desperate effort to bolster the efforts of the American ruling elite to dominate the Middle East and its oil resources by increasing the violence and repression directed against the Iraqi people and by ramping up threats and provocations against Syria and Iran.

Howard’s intervention is aimed at reinforcing Bush’s cynical justifications for the US-led occupation and at providing some measure of international support to his isolated and beleaguered administration.

The “coalition of the willing” assembled by Washington in the lead-up to the invasion in 2003 has largely disintegrated. Countries including Spain, Italy, Japan, Holland, Ukraine, and Poland have withdrawn all or most of their troops and logistical personnel. Even Britain, Washington’s most important ally, has been gradually scaling down its forces, and according to London’s Daily Telegraph is set to withdraw nearly 3,000 troops by the end of May.

In this context, Canberra’s ongoing contribution to the occupation takes on a political significance that far outweighs the Australian government’s relatively minor military contribution.

Australian troops in Iraq, presently numbering about 800 in addition to another 600 stationed in and around the Gulf, will not be expanded as part of Bush’s new plan. Howard, however, adamantly refused to rule out sending additional forces in the future. He also made clear that Australian troops would remain in Iraq indefinitely. “In the end the goal has to be a withdrawal of foreign forces, including our own, and the assumption of full security responsibility by the Iraqis,” he warned yesterday. “We are some time away from that, let’s be realistic.”

On Wednesday, Foreign Minister Alexander Downer explained that Australia’s troop commitment in Iraq is determined in relation to Canberra’s other neo-colonial operations. “We do have a small contribution that we make in Iraq but of course we have other deployments as well in places like the Solomon Islands and East Timor and Afghanistan, so there obviously is a limit to what we can reasonably do,” he stated. “The Americans understand that.”

Downer’s comments point to the real motivations behind the Howard government’s unwavering support for Washington. Ever since the open eruption of US militarism that followed the September 11 terrorist attacks, Canberra has backed the Bush administration’s open repudiation of international law and its reckless interventions in the Middle East and around the world. In return, Bush has supported the Australian government’s aggressive operations in its “special patch”, the South Pacific.

Howard has also seized upon the so-called war on terror to tear up democratic rights and vilify Muslims at home. In his press conference yesterday, he again portrayed the war as a struggle between Western civilisation and Islamist terrorists.

“We all should understand what is at stake: an American or western defeat in Iraq will be an unbelievable boost to terrorism and if America is defeated in Iraq, it is hard to see how the longer term fight against terrorism can be won,” he declared.

“If the West retreats in Iraq, if America retreats in Iraq then that has enormous consequences for the stability of the Middle East and it will also be an enormous boost to terrorism in our part of the world... The alternatives the president faced were either to announce what he announced or effectively indicate that the West could not win in Iraq and start making arrangements, however it might be camouflaged, for a withdrawal. I believe in the circumstances the president chose the only realistic option.”

According to Howard’s twisted logic, all Iraqi resistance to the US-led occupation amounts to terrorism, while peace and democracy find expression in the foreign forces that have been responsible for the deaths of an estimated 655,000 Iraqis and atrocities including the tortures at Abu Ghraib, the Haditha massacre, and the obliteration of Fallujah.

The prime minister is able to get away with this only because of the pro-war stance of the Australian media and the opposition Labor Party. Every newspaper, ranging from the Murdoch press to the “liberal” Sydney Morning Herald and Age, today published editorials supporting Bush’s plan, albeit with certain tactical concerns.

Labor leader Kevin Rudd expressed his hope that Bush’s plan to escalate the war and subjugate the Iraqi people would succeed. “I think it’s very important that on days like this all people of goodwill express a determination and a hope that this new announcement from President Bush produces good results for the Iraqi people,” he stated.

Rudd praised Bush for “changing course” and criticised Howard for not doing likewise. “President Bush accepts responsibility for policy failure in Iraq, but Howard remains silent,” he declared. “Mr Howard should come out of hiding, front the Australian people like President Bush has done, and explain how this new strategy for Iraq is going to work ... explain how this new strategy will succeed in winning the way in Iraq.”

These remarks once again highlight Labor’s pro-war position. While the party calls for a scheduled withdrawal of Australian troops on the ground, this is only in order to redeploy them to Afghanistan and the South Pacific. Moreover, Labor backs the ongoing occupation of Iraq by US forces and fully supports the Bush administration’s war aims. Rudd again emphasised on Wednesday that any withdrawal of Australian troops under a Labor government would be “within a reasonable timeframe, so that we wouldn’t leave our American ally immediately in the lurch”.

The sentiments of the majority of Australians, who oppose the illegal occupation in Iraq and want an immediate end to the war, find no expression within the official political and media framework. Like their American counterparts, Australian working people and youth have been completely disenfranchised by the existing political set-up. The struggle that must urgently be taken up against the Iraq war can only be developed on an independent, socialist and internationalist basis, in direct opposition to the establishment parties.