President Bush announced plans Wednesday night to escalate the war in Iraq and send over 20,000 more troops. He said he took responsibility for past mistakes but that more troops are needed to pacify Baghdad and other parts of the country. The President also threatened military action against Iran and Syria. We play excerpts of his address. 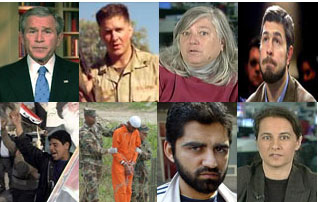 As President Bush announced plans last night to escalate the war in Iraq and send over 20,000 more troops, he also threatened direct military action against Iran and Syria.

The President announced the deployment of an additional carrier strike group to the region and he vowed to seek out and destroy those who are providing material support to U.S. enemies in Iraq.

President Bush: "Succeeding in Iraq also requires defending its territorial integrity and stabilizing the region in the face of extremist challenges. This begins with addressing Iran and Syria. These two regimes are allowing terrorists and insurgents to use their territory to move in and out of Iraq. Iran is providing material support for attacks on American troops. We will disrupt the attacks on our forces. We will interrupt the flow of support from Iran and Syria. And we will seek out and destroy the networks providing advanced weaponry and training to our enemies in Iraq.
"We're also taking other steps to bolster the security of Iraq and protect American interests in the Middle East. I recently ordered the deployment of an additional carrier strike group to the region. We will expand intelligence-sharing and deploy Patriot air defense systems to reassure our friends and allies. We will work with the governments of Turkey and Iraq to help them resolve problems along their border. And we will work with others to prevent Iran from gaining nuclear weapons and dominating the region."

Hours after the President spoke, U.S. forces raided the Iranian consulate office in the northern Iraqi city of Arbil. The troops broke into the office, seized documents and computers and arrested five employees.

On Iraq, President said he took responsibility for past mistakes, but he said more troops are needed to pacify Baghdad and other parts of the country.

President Bush: "So America will change our strategy to help the Iraqis carry out their campaign to put down sectarian violence and bring security to the people of Baghdad. This will require increasing American force levels. So I've committed more than 20,000 additional American troops to Iraq. The vast majority of them -- five brigades -- will be deployed to Baghdad. These troops will work alongside Iraqi units and be embedded in their formations. Our troops will have a well-defined mission: to help Iraqis clear and secure neighborhoods, to help them protect the local population, and to help ensure that the Iraqi forces left behind are capable of providing the security that Baghdad needs."

President Bush: "This new approach comes after consultations with Congress about the different courses we could take in Iraq. Many are concerned that the Iraqis are becoming too dependent on the United States, and therefore, our policy should focus on protecting Iraq's borders and hunting down al-Qaeda. Their solution is to scale back America's efforts in Baghdad or announce the phased withdrawal of our combat forces. We carefully considered these proposals, and we concluded that to step back now would force a collapse of the Iraqi government, tear the country apart, and result in mass killings on an unimaginable scale. Such a scenario would result in our troops being forced to stay in Iraq even longer and confront an enemy that is even more lethal. If we increase our support at this crucial moment and help the Iraqis break the current cycle of violence, we can hasten the day our troops begin coming home."

EXCLUSIVE..."I'm Scared Out of My Mind" - Live From Iraq, Active Duty Army Sgt. Speaks Out Against War Escalation

In an Democracy Now! exclusive, we go to Iraq to speak with Army Sergeant Ronn Cantu who is serving his second tour in Iraq. Cantu recently signed a petition to Congress - known as an Appeal for Redress - calling for the withdrawal of U.S. troops. He says, "Everything we do here is on the defense. Any troops increase over here - they will just be more sitting ducks, more targets."

As Bush Commits More Troops to Iraq, UFPJ Calls For March on Washington to End War

We speak with Leslie Cagan, the national director of United For Peace and Justice. The group has called for a March on Washington on January 27 to end the war. Cagan says, "I do not think anybody really understood just how deeply the feeling against the war is in this country was until Nov. 7th."

As President Bush announces plans to escalate the war in Iraq and send over 20,000 more troops, we go to Najaf to get response from Sami Rasouli, an Iraqi-American living in Najaf.

Torture, Suicide and Imprisonment: A Look Back at Five Years of Guantanamo

Today is the fifth anniversary of the first prisoners being sent to the U.S. prison camp at Guantanamo Bay, Cuba. Since then, more than 750 men and boys from 40 countries have been imprisoned at there. Not one of them has been put on trial. Hundreds have been released without charge and sent home. Three have committed suicide at least 40 others have tried to do so. We look back at some of our coverage over the years, including interviews with former Guantanamo detainees and interrogators, attorneys, human rights activists and more.

Former Guantanamo Prisoner, Brother of Current Prisoner in Cuba to Call for Closure of Prison Camp

We speak with Gita Gutierrez, an attorney with the Center for Constitutional Rights and has traveled to Guantanmo many times to represent detainees there.