Two councils, one which worked in collusion with a developer to destroy a town centre for a superstore, the other that said no to Tesco, now has a thriving town centre with several small retailers, bucking the national trend of closures. 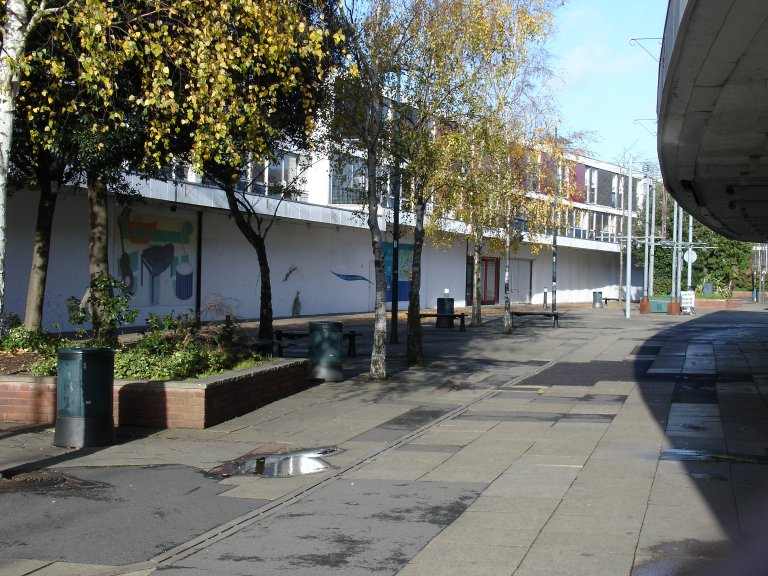 Eight years ago KPI (a Kuwaiti-financed St Modwen front company) bought Farnborough town centre. In collusion with the local council, the Rotten Borough of Rushmoor, they have systematically laid waste to the town centre. There is now little left, the streets are deserted, shops and flats boarded up, it looks like a ghost town.

KPI wish to demolish the norther half of the town centre for an unwanted superstore. It will face out of the town and kill off what little retail remains. Firgrove Court, social housing, a small estate of 28 maisonettes, is earmarked for demolition for the car park. Pavilion Housing Association that owns the estate, is letting it fall into disrepair to drive out the few remaining tenants.

The leader and chief executive of the council have regular meetings with KPI to help promote their agenda. Planning applications by KPI were simply rubber-stamped.

As one councillor who represents the town centre has said, the council has given KPI everything they have asked for.

The latest scandal is the sale of public land to KPI. This was sold at a knockdown price, the District Valuer had to step in. KPI had the council over a barrel with a gun to their head, either sell the land on the cheap, or we leave you with a derelict town centre.

The deal to sell the land has not yet been signed. KPI are looking for cast iron guarantees on future planning applications before they will sign.

Eight years ago Saxmundham said no to Tesco.

Saxmundham in Suffolk is the town that said no to Tesco. Tesco wished to build a superstore on the edge of town. The local council, Suffolk Coastal listened to local people and said no to Tesco.

A food web has been created in Suffolk, at the centre of which is the small market town of Saxmundham, the town that said no to Tesco. The result has been a renaissance in small retailers – butchers, bakers, greengrocer, fishmonger, farmers markets and farm shops have also flourished – thus bucking the national trend of widespread closure. Saxmundham has now become a Mecca for food lovers.

Farmer's wife Margaret Holland, cake and pie maker from Gelham, uses local meat, game, eggs, vegetables and fruit in her pies and cakes. She sells her produce in the local butchers from where she obtains her sausage meat and in the farm shops from where she buys her fruit and vegetables. She says her business would not have got off the ground without the independent shops in Saxmundham. She now employs 20 people, of which only one comes to work by car.

Cherries, a small fruit and veg shop in the town's marketplace, buys asparagus from a local farm three minutes up the road, where it is freshly picked every morning. It goes from ground to shop in half an hour.

A network of small producers and retailers, generates local employment, recycles money within the local economy.

At Upton Park in East London, St Modwen is known as the Developer from Hell. In collusion with the local mayor, they are wishing to destroy the very popular Queen's Market and replace it with an unwanted superstore. The superstore was rumoured to be Asda. The bad publicity Asda were receiving being linked with St Modwen, forced Asda to pull out.

At a recent meeting for local businesses, those that at least can be relied upon not to ask difficult questions or otherwise rock the boat, the rest are not invited, Simon Rutter, the man at KPI responsible for destroying Farnborough town centre, told the gathered sychophants that the town centre redevelopment would not now take place until March, due to the fact that papework had not been signed, but he would not like to go public with this information!