Notes from the media coverage of the Guantanamo protests with four related photos. 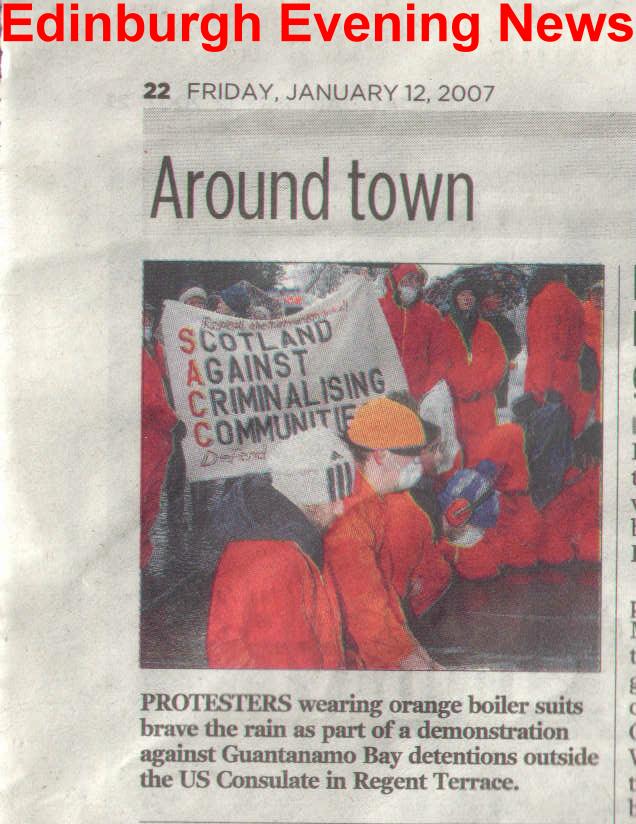 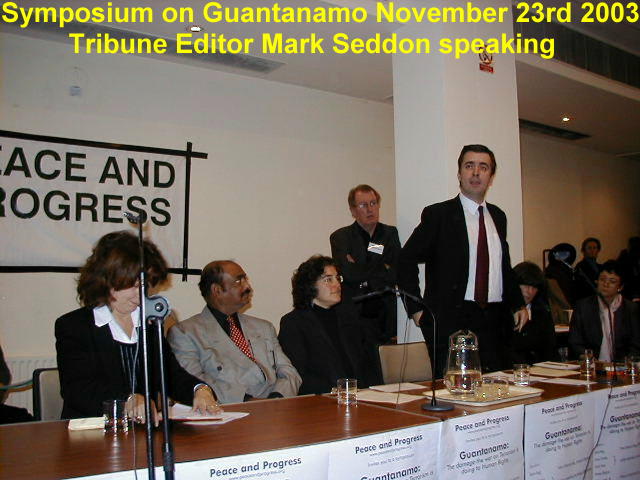 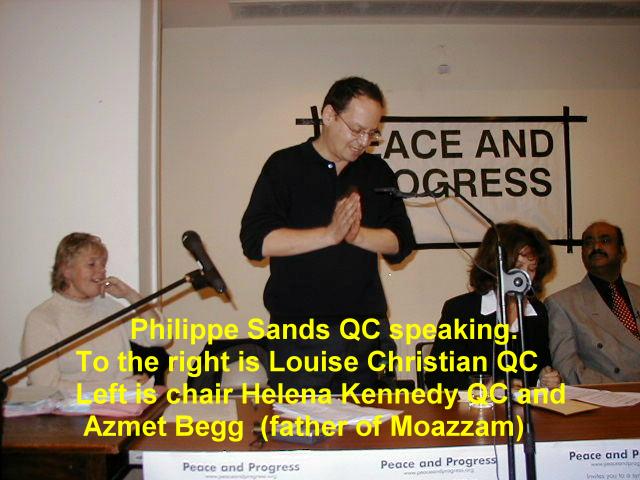 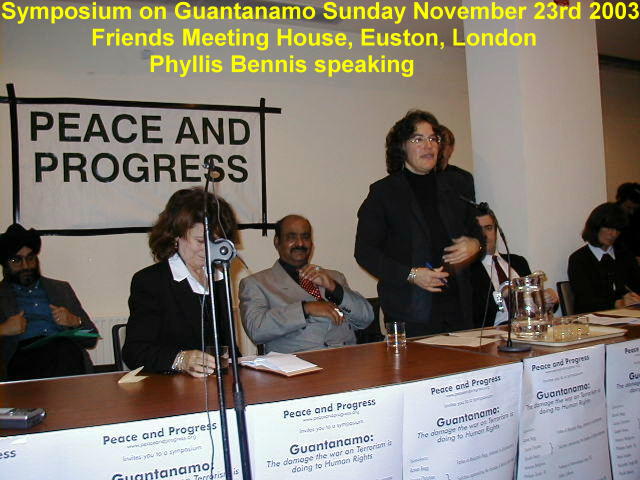 
Thursday January 11th 2007 saw a number of demonstrations take place to mark the fifth anniversary of the opening of the Guantanamo Bay concentration camp.

Edinburgh’s protest took place outside the US Consulate in Regent Terrace and despite cool and blustery weather was attended by around 40 people. A letter of protest was handed in to the Consulate and later at the Scottish Parliament -

The protest was briefly mentioned on that day’s BBC `Reporting Scotland` with a 10 second clip showing the protest. The Edinburgh Evening News of Friday 12th January had a small photo of the demo in the top left hand corner of page 22. (attached)

A meeting in the Scottish Parliament was hosted by Tommy Sheridan MSP (Solidarity) - from 12.30-1.30pm. The meeting featured a screening of the documentary Outlawed - torture, extraordinary rendition and disappearances in
the war on terror (27 minutes). A copy of the film has been sent by the American
Civil Liberties Union to every member of the US Congress.

Here are photos from the protests around the world:


(The short piece in the Edinburgh Evening News is attached.)


Here are notes from a 2003 symposium on Guantanamo held in London:

Here is a brief summary of the main points made by the speakers at the symposium [discussion] on Guantanamo bay Sunday 23rd November 2003.
The symposium on the US detention centre at Guantanamo bay in Cuba was held in Friends Meeting House, opposite Euston Station at 2.00pm in London today.
The meeting was chaired by Helena Kennedy QC [QC = Queen’s Counsel] and featured human rights lawyer Louise Christian, actress and campaigner Vanessa Redgrave, editor of `Tribune` Mark Seddon, Gareth Pierce QC, Phyllis Bennis and others. Some 300 people turned out on a cold November day showing that people definitely are interested in human rights.
The first speaker was Azmet Begg, father of Moazzam Begg who is detained in Guantanamo. He said that his son had gone to Afghanistan to work on water wells. He moved to Pakistan and was arrested there in February 2002; he was held for a year in Bagram, Afghanistan and then taken to Camp Delta, Guantanamo. He told of the appalling conditions in which his son was held in Guantanamo. Lizards and spiders the size of the palm of your hand come into his cage. He asked why his son could not be brought to Britain in he way that American John Walker was brought to the USA. His son had been under torture for two years. At the end of his moving talk he thanked all those who had come.
The next speaker Louise Christian paid tribute to Mr Begg. Only a few years ago who would have thought that the US government would have put 660 young men, all of them Muslim, in a prison camp in a place beyond the jurisdiction of any court and deny them access to a lawyer and say that they were going to hold them indefinitely. What do you do? She said there was a double illegality about Guantanamo. The rules for the military tribunals contravene International Law. She spoke of the `appointing authority` - an Orwellian sounding phrase - is not in fact an authority at all but one man - Paul Wolfowitz! The American Bar association has advised its members not to handle these cases. The prospects of show trials next year is a real possibility. Any lawyer will tell you that the concept of a `war on terrorism` has real problems.
Next lawyer Gareth Pierce [who represented the `Guildford Four`] also raised the possibility of a show trial early next year. Vulnerable people were being interrogated in vulnerable conditions and their `confessions` are likely to be total nonsense. The whole Guantanamo system is a fascistic system.
Then Vanessa Redgrave spoke saying she could not rest till the Guantanamo prisoners got their rights. Guantanamo combines the horrors of the Soviet psychiatric prison units and the Nazi concentration camps. She spoke of how the Red Cross had been denied access to the camp. The measures being taken are of a fascistic character. The Universal declaration of human rights is being disregarded.
Philippe Sands QC, Professor of International Law at UCL [University College London] made the point that the term `unlawful combatants` is not recognized or referred to in any of the conventions. The Red Cross, the guardian of the Geneva Conventions, considers it inapposite and inapplicable.
Mark Seddon, editor of `Tribune` magazine, said that if great powers are allowed to get away with this sort of thing (Guantanamo) they will try it again elsewhere.
Rabinder Singh QC quoted the Universal Declaration of Human Rights, which means everyone, deserves equal treatment under the law. He spoke of Politicians using words and phrases describing occupation as liberation, war as peace and defiance of the UN as implementation of UN resolutions then we have to scrutinize their words with care.
Chair Helena Kennedy reminded us of the abuses of human rights committed against people in the 1970’s in Northern Ireland such as detention without trial, bags put over people’s heads, being stood against the wall etc. There was a danger of becoming cavalier with civil liberties under the flag of terrorism requiring something other.
Final speaker was Phyllis Bennis of the Institute for Policy Studies in Washington DC. She said, referring to the demonstrations against Bush, “Let me start by congratulating all of you for knowing the exactly appropriate way of welcoming the President of my country.” She spoke of the rise of the American Empire and compared it to the way the Athenians took over the island of Melios. When the Melians asked what about the democracy you keep talking about the Athenians said “For us there is democracy for you there is the law of empire.” The US is creating a new set of laws for the rest of the world. There has to be a Global response and we saw the beginning of it in the mobilizations in 665 cities around the world on February 15th this year. The Bush administration called the UN irrelevant. She said that we are faced with a very serious situation when in the United States there is so much ignorance of the World combined with so much untrammelled power. The Question is what do we do? We’ve begun the process with things like the World Social Forum, the February 15th demos etc. Demonstrations in the street are important but are not enough. If we are serious about protecting democracy we must use the tools of democracy, such as writing letters to newspapers, political representatives, organising demonstrations etc. We have to be prepared to say this is what we want instead.
There were a number of questions from the floor and the symposium finished at around 4.45 pm.

For more information please see the website of `Peace and Progress`:
www.peaceandprogress.org

Here is some information about Moazzam Begg who, happily, was released in January 2005:

The show trials, which were expected to happen in 2004, have still not happened. The great legal black hole of Guantanamo is still there – when will it be resolved?