35th Anniversary of the Aboriginal Tent Embassy Canberra & Aboriginal Sovereignty Day, 26th January 2007, Canberra. "Aboriginal Peoples must unite and assert our Sovereign Custodianship of our Lands. We must commence coming together as a united front, many nations one voice under the longest serving Sovereign, political protest site in the country. The Aboriginal Tent Embassy. The Land must go back to the Peoples. Land Rights is Human Rights. Land Rights is a Sovereign Right." 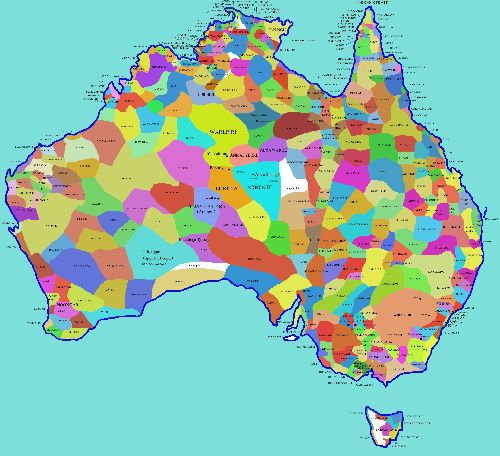 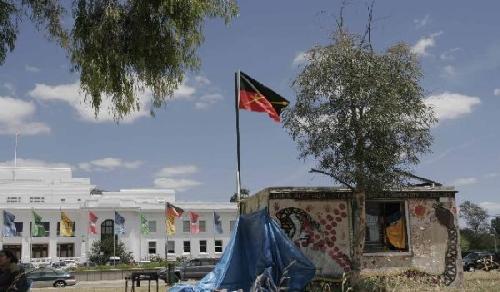 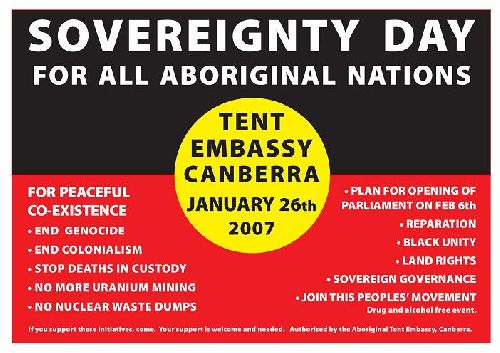 The 1st January 2007 marks the 106th “Birthday” of Australian Federation 1901. In the same year, Sir Edmund Barton endorsed the commonwealth government’s participation in the legislation of an archaic, barbaric act of genocide. Derived from the Papal Bulls of 1445 and their partnership with the Crown to “…globally zone the black, red and yellow races of the world.” [Edmund Barton, Parliamentary Debate 7th August 1901]. The First Prime Minister, quoting and supporting Professor Pearson in the wiping out the non Christian religions of the world. And that included our Peoples here in Australia.

The 26th January 2007 will mark 219 years of the illegal occupation of the crown and commonwealth governments on the east coast of this country as the onslaught of genocide policies prevails in Australia led by the Reconciliation LTD and their government appointed Aboriginal Committees. All who are operating on the founding influences and premise of the partnership between the European Monarchs of the world and the Roman Catholic Church in the 1400s. The only English Pope used the Papal Bulls and gave Henry II Ireland. Since then the Vatican has used the Papal Bulls to give other Nations to other Monarchs. A method that was quickly adopted by the Church of England and the Anglican Church, headed up by Her Royal Highness, Her Majesty the Queen of the Commonwealth, Northern Ireland and the United Kingdom.

In 2007 we have the Reconciliation Limited embarking on the same journey uniting with churches and governments as a front for assimilation policies, employing Aboriginal peoples to go against their own Peoples, again! Whilst our Peoples in the NT were given 100 years to walk off their land as the commonwealth, state and territory governments embarked in the biggest land grab in the criminal history of the commonwealth, since 1788. Multi-nationals, lawyers and anthropologists are making the money whilst our Peoples live in poverty, watching our lands be destroyed, our sites desecrated around us, then to contend with the indiscretions of the justice system. With systematic acquittals of the Australian Police Force’s violent violations that more often than not, result in a death in custody.

Since the release of the Recommendations of the Royal Commission into Aboriginal Deaths in Custody over One hundred of our men, women and children have died at the hands of the police forces in this country. The Aboriginal People have to forgive without justice we saw that quite clearly in the latter months of 2006 when the arsenic acidic tongue of the Beattie government supported the actions of a police officers brutal and fatal bashing of Mulrunji Doomadgee, an unarmed Aboriginal man in custody. If Mr. Hurley were in the defence force he would be court marshalled.

The Native Title Act and those who have expressed their interests have monopolised and marginalised Aboriginal peoples, excluding the majority of Aboriginal Peoples their say in what happens on their land. Native Title cedes our Sovereign Custodianship of Our Lands. The Indigenous Land Use Agreements are illegal. They indemnify the mining companies and the governments from persecution under their own laws using their discretionary powers to save themselves however not implementing fair, humane and legal agreements with secure legal tools for the traditional owners. They can change their rules at a whim. It is unfortunate that their discretionary powers do not save the signatories and participators of these illegal agreements from legal persecution. All agreements under this amendment are illegal and unbinding. We do not have to prove our cultural connection to this land to an illegal occupant. Under their law they are trespassers, discriminating against not only the Aboriginal races of the land but humanity itself.

The Native Title Act was deemed a racist Act by Mary Robertson, former Chairperson of the United Nations. It is unfortunate that the current United Nations have reneged on their human rights Charters and denied 370 Million Indigenous peoples of the globe our Human Rights, the majority being “black, red and or yellow.” The Pope did not apologise for nothing.

This onslaught of genocide of disposed, socio, economically, culturally disempowered Peoples is a Universal Crime and all countries who have participated in the denial of our rights as the Indigenous Peoples of the Planet are committing global genocide.

Aboriginal Peoples must unite and assert our Sovereign Custodianship of our Lands. We must commence coming together as a united front, many nations one voice under the longest serving Sovereign, political protest site in the country. The Aboriginal Tent Embassy. The Land must go back to the Peoples. Land Rights is Human Rights. Land Rights is a Sovereign Right.

Join Speedy McGuinness – March 4 A Nuke Free Country from the Civic to Aboriginal Tent Embassy, 9am.

Always was and Always will be Aboriginal Land.

Removal of ancient rock art from the Dampier Archipelago

The refusal by the federal Minister for the Environment, Ian Campbell to protect what the National Trust describes as "one of the world's largest collections of rock carvings, which date back tens of thousands of years." is an embarrassment for every Australian.

Would the Egyptians knock down the Pyramids?

The truth is, we don't have to choose between destruction or development. Experts agree new gas can still be extracted offshore, but processed at a different location. If enough of us speak up now we can save the remaining rock art without dampening the economic development of Western Australia's growing industry.

Below are photos from today's Melbourne protest in solidarity with protests around the nation re Palm Island in Far North Queensland, Cameron Doomadgee's death in custody and the lack of action against the Queensland Police responsible for his welfare at the time.

Australia: No charges against police for killing Aboriginal prisoner

From Hawke to Beattie, Labor has been central to the ongoing repression of Aboriginal people, who are up to 30 times more likely to be locked up than non-indigenous people, and the maintenance of the deep-seated poverty and social deprivation that underpin this appalling disparity.

A Queensland coroner has found a police officer kicked an Aboriginal man to death on Palm Island two years ago. The coroner says the coroner's report into the death of the Palm Island man failed to meet deaths-in-custody guidelines. Mulrunji, 36, was found dead on the cement floor of his cell at about 11am on November 19, 2004.

Christine Clements has found that Mulrunji was kicked by Senior Sergeant Chris Hurley after his arrest for public drunkenness, and that Mulrunji died as a result of his injuries.

The Palm Island community erupted into a riot in the days after the death in custody...

Nonetheless, the Beattie government has shelved the report. Unable and unwilling to resolve the social problems, its reaction has been to close ranks with the police and prepare for further repression.

A review of news, opinion and photography recorded from the Indymedia Newswire. Free to rebroadcast. The world & recorded for the community archive!