Birth of a New Nation

I want to preach this morning from the subject, "The Birth of a New Nation." And I would like to use as a basis for our thinking together a story that has long since been stenciled on the mental sheets of succeeding generations... 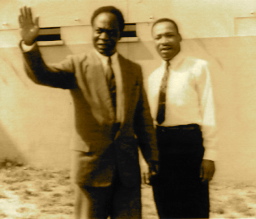 I want to preach this morning from the subject, "The Birth of a New Nation." And I would like to use as a basis for our thinking together a story that has long since been stenciled on the mental sheets of succeeding generations... Prior to March the sixth, 1957, there existed a country known as the Gold Coast. This country was a colony of the British Empire. This country was situated in that vast continent known as Africa. I?m sure you know a great deal about Africa, that continent with some two hundred million people and it extends and covers a great deal of territory. There are many familiar names associated with Africa that you would probably remember, and there are some countries in Africa that many people never realize. For instance, Egypt is in Africa. And there is that vast area of North Africa with Egypt and Ethiopia, with Tunisia and Algeria and Morocco and Libya. Then you might move to South Africa and you think of that extensive territory known as the Union of South Africa. There is that capital city Johannesburg that you read so much about these days. Then there is central Africa with places like Rhodesia and the Belgian Congo. And then there is East Africa with places like Kenya and Tanganyika, and places like Uganda and other very powerful countries right there. And then you move over to West Africa, where you find the French West Africa and Nigeria, and Liberia and Sierra Leone and places like that. And it is in this spot, in this section of Africa, that we find the Gold Coast, there in West Africa.

You also know that for years and for centuries, Africa has been one of the most exploited continents in the history of the world. It?s been the "Dark Continent." It?s been the continent that has suffered all of the pain and the affliction that could be mustered up by other nations. And it is that continent which has experienced slavery, which has experienced all of the lowest standards that we can think about, and its been brought into being by the exploitation inflicted upon it by other nations...continue at www.blackstate.com