next monday at horseferry road, judge purdy hands down his decision whether brian haw has a case to answer for alleged breach of socpa conditions that led to a night-time police raid by 78 officers in may 2006 cutting his display from more than forty metres down to a mere three. in the meantime, artist mark wallinger has been busy recreating the whole display and his exhibition entitled 'state britain' opened this morning at tate britain, on the very edge of the socpa zone. 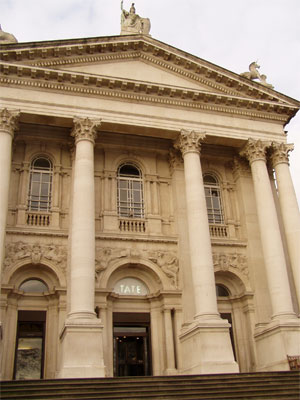 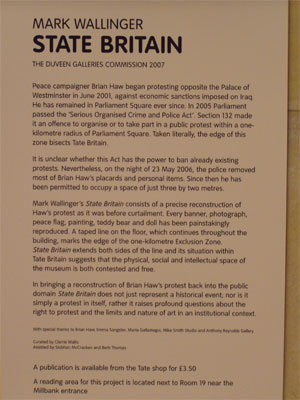 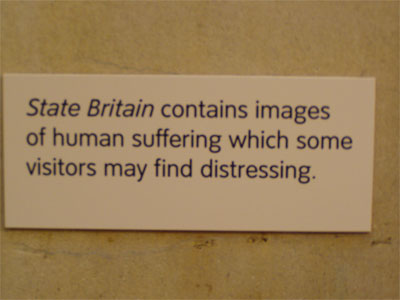 why blair didn't want them on his doorstep 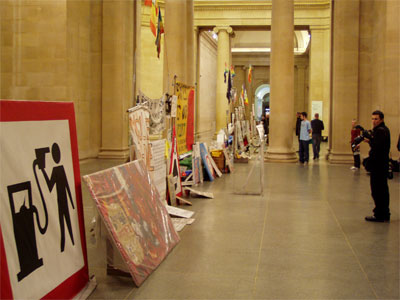 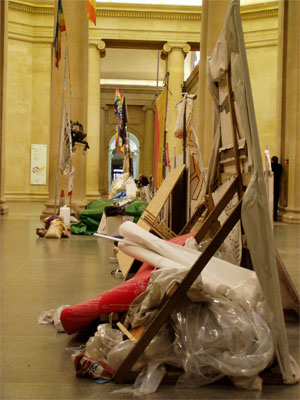 all the details from the rear of display 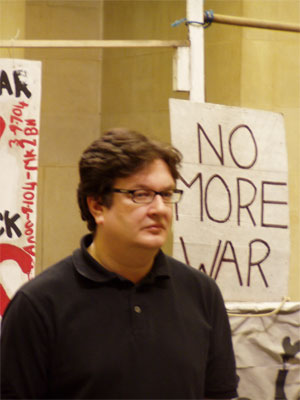 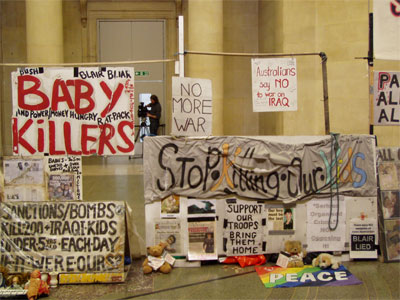 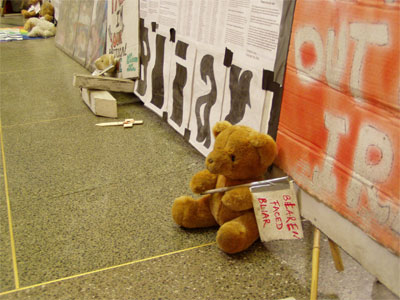 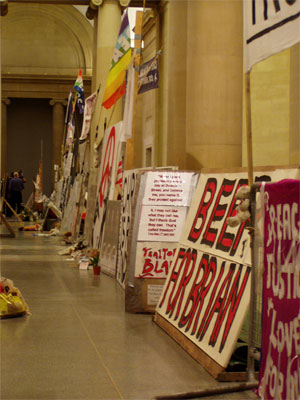 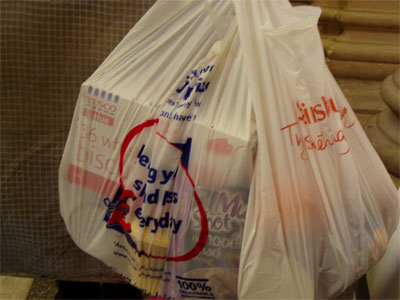 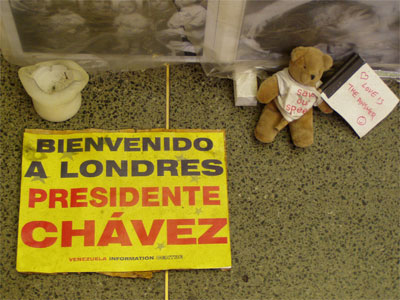 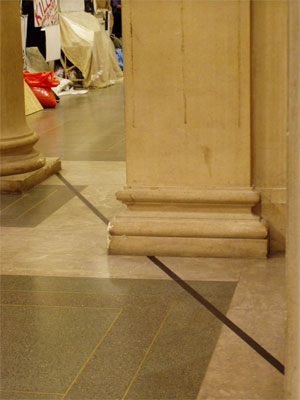 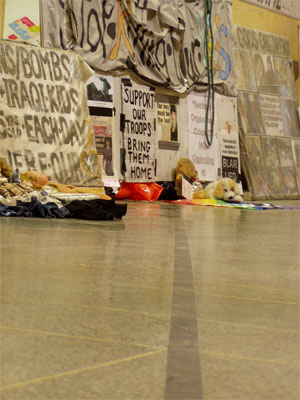 half inside and half outside the 1km line 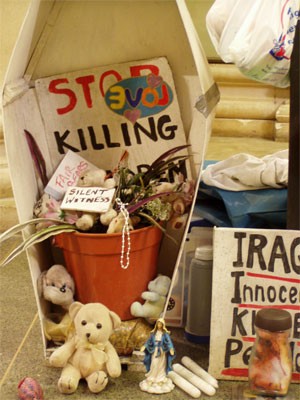 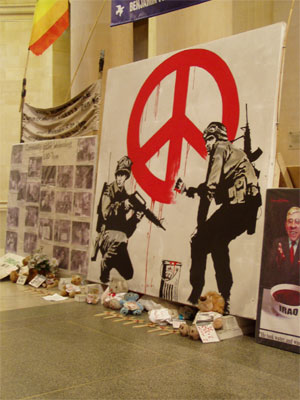 one of the banksy works reproduced 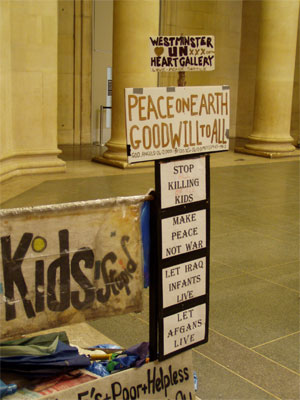 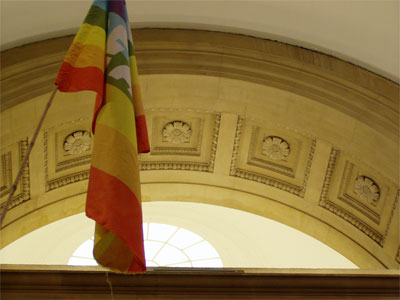 peace at the tate 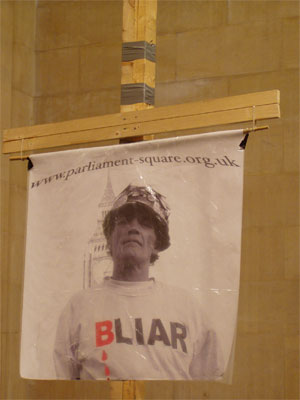 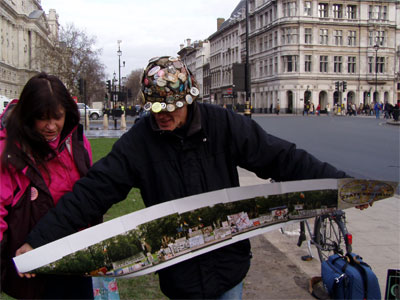 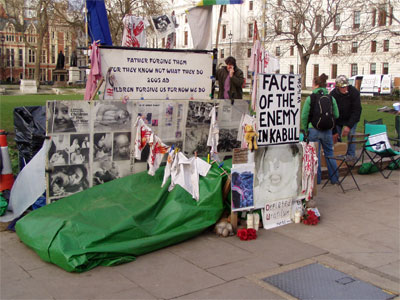 brian's present display at the square

artist mark wallinger, incensed by the new socpa law controlling protest around parliament, has been working on the piece in a secret warehouse off the old kent road for the past few months with a team of fifteen artists. he worked from photographs and film of brian's display as it stood just before the possibly unlawful police raid last may. some source material was supplied by indymedia contributors. with a team of workers, mr wallinger carefully reconstructed every aspect of brian's site, right down to packs of cigarettes, boots and clothing, cooking implements, sandbags, and the stains on weathered wooden poles used to erect the placards.

copyright credits were sought and given by original contributors to brian's site, including various news and civil rights organisations, writers, and of course the graffitist banksy.

47 year old mark wallinger is previously best known for his sculpture for the empty fourth plinth in trafalgar square, 'ecce homo' (1999), a depiction of a very ordinary-looking jesus christ amongst the oversized imperial symbols of the square. his work in the past has often touched on themes of class and nationality, with a series of full length paintings of the homeless coming to the attention of charles saatchi in the early 90s. he was nominated for the turner prize in 1995 after buying a racehorse and naming it "a real work of art'. his plan to have this 'art' displayed on bookies' screens around the country on a regular basis was scuppered by injury and the horse sadly retired after one race.

the current installation, entitled 'state britain', appears in the duveens gallery at tate britain and will remain there until august (free entry). although the socpa law defines tate britain as outside the zone, if the perimeter of one kilometre around parliament is taken literally it forms a border right through the gallery and mark wallinger has placed brian's display half inside and half outside with a black line on the floor marking this circumference throughout the tate.

yesterday, the 'sunday times' broke the secrecy around this exhibition with an underhand scoop that annoyed those involved at the tate and the parliament square campaign. murdoch journalist, olivia cole, lost the plot a bit by stating the new work is 'inspired by' the encampment of brian haw, and 'it resembles the pavement picket'. if, while sneaking around to get pictures of the work ahead of time, she'd have taken the trouble to read the huge notices, she'd have learnt it was 'a precise recontruction of haw's protest' with 'every banner, photograph, peace flag, painting, teddy bear and doll' 'painstakingly reproduced'. their quote from brian 'this weekend' that he knew nothing about it was the funniest nonsense, since he's been closely involved with the project for months. oh well, what do you expect from murdoch scum!

brian haw's display was raided on may 23rd by police after he failed to comply with conditions that were imposed by superintendent terry, limiting his freedom of expression to just three metres. last month, brian's barrister argued in court that the conditions were confused and unclear, and that anyway under the act it is the commissioner who should impose them. police appeared with an undated letter from the commissioner handing over the power to impose conditions - they could not account for why it was undated. judge purdy will hand down a decision next monday morning at horseferry road (westminster magistrates court) as to whether brian has any case to answer - supporters are warmly welcome at the court.

socpa timeline and in depth coverage on indymedia -