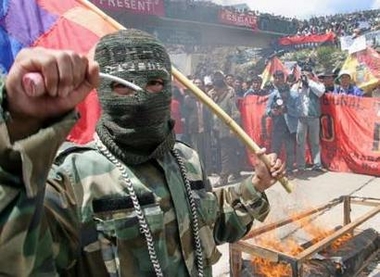 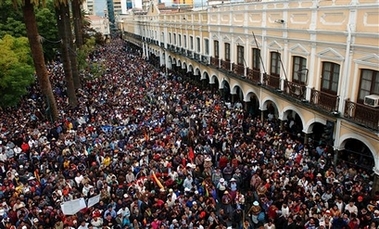 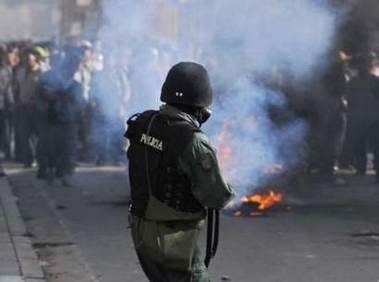 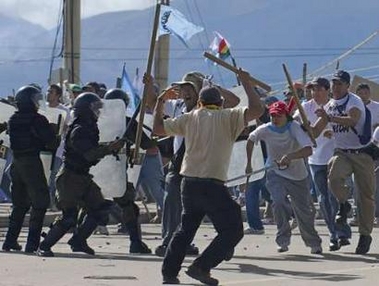 PHOTO 1 - A Bolivian demonstrator holds a dynamite stick during a rally in El Alto, on the outskirts of La Paz, January 15, 2007. Thousands of protesters from El Alto city on Monday demanded the resignation of La Paz governor Jose Luis Paredes for supporting a pro-autonomy movement. The rally in El Alto took place four days after violent clashes in the central province of Cochabamba, also over the autonomy issue. (photo: Jose Luis Quintana)

PHOTO 2 - Supporters of Bolivia's President Evo Morales march asking for the resignation of local governor Manfred Reyes Villa in Cochabamba, Bolivia, Friday, Jan. 12, 2007. At least two people were killed Thursday during clashes between factions for and against the governor. (photo: Juan Karita)

PHOTO 3 - A Bolivian riot police officer shoots tear gas at demonstrators during clashes in Cochabamba, about 400 km (248 miles) southeast of La Paz, January 11, 2007. Supporters of leftist President Evo Morales, who want Cochabamba's provincial Governor Manfred Reyes Villa to resign, fought the governor's backers with guns, sticks and stones. Reyes Villa, like several other governors in South America's poorest country, is at odds with the national government over his drive for more autonomy for his region. (photo: Danilo Balderrama)

PHOTO 4 - Sympathizers of Cochabamba's governor clashe with supporters of Bolivia's President Evo Morales during violent clashes in Cochabamba, about 400 km (248 miles) southeast of La Paz, January 11, 2007. At least one person was killed and some 50 injured during clashes between supporters of leftist president Morales demanding the resignation of the governor of the Cochabamba region and the governor's sympathizers. Manfred Reyes Villa, the governor of Cochabamba, is at odds with Morales' leftist government because of his plans to organize a referendum to demand more autonomy for the country's regions. (photo: Danilo Balderrama)