Obviously oblivious to the links with childhood obesity and aggression, and probably doesn't care, Gerald Howarth MP was recently pictured on the front page of his local paper serving a Big Mac. 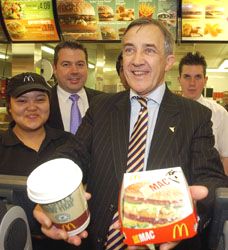 Is Howarth not aware of the links with childhood obesity, increased aggression? Does he even care? Maybe he has not seen the rubbish littering the streets, the increase in rats.

By 2020, one third of adults, one fifth of boys, one third of girls will be obese. The diet that kids are being fed is so bad, that most of them are likely to be dead before their parents.

Modern diets, high in fats, sugars and synthetic additives, low in nutrients, in other words junk food, cause increase in criminal and anti-social behaviour.

Across the country there has been a 69% increase in rat infestation, an increase in super rats, this is down to councils moving to fortnightly refuse collection, takeaways and throwing of food in the street. The rats are gorging themselves senseless.

Maybe Howarth should watch the documentary film Super Size Me!

Howarth compares the service he provides with that of McDonald's:

'I myself have 75,000 constituents who I serve and I do that in a similar that McDonald’s approaches its customers.'

In the infamous McLibel trial a decade ago, the barrister acting for McDonald's admitted in court they serve junk food.

Is this an implicit admission by Howarth that he provides a junk service?

Recently Howarth was embroiled in scandal when on behalf of TAG Aviation he backed their demand for a doubling of weekend flights at Farnborough Airport against the strongly expressed wishes of his constituents.

What is it with the British and junk foods? Why do British politicians need to be seen linked with junk food?

Less than 3% of Brits rate food as important in their lives, anyone seen as otherwise is seen as elitist, a food snob. It is inconceivable that French or Spanish or Italians would regard food in the same manner. Food is seen like women and wine and sex, as one of life's great pleasures.

How deeply entrenched are these stereotypes was illustrated by a survey Barnardo's carried out of children's attitudes to food.

Children were shown two pictures of food, one of a burger and chips and a coke, the other of a sandwich, salad, fruit and a glass of milk. The children associated the healthy option with posh people, the junk food was linked with poverty, laziness, parents who could not cook, drug addiction, anti-social behaviour, unemployment, working in a junk food outlet.

Recently a woman who was fined for overstaying her welcome in a McDonald's. She had exceeded her alloted time in their car park. No mention of her feeding her offspring junk food, in what amounts to little more than child abuse.

It would be difficult to imagine any French, Italian, Spanish, indeed any European politician, being seen dead near a McDonald's, let alone pictured serving a Big Mac

It is inconceivable Dominique de Villepin would agree to a photo opportunity in McDonald's, as he would be seen as a man lacking in good taste, his opinion poll ratings would fall even further. On the other hand Tony Blair and John Prescott grasp at any opportunity to be seen as 'men of the people', photographed eating greasy fish n chips out of a dirty newspaper, and Gordon Brown not wishing to be left behind, stresses that he is 'a beer, pizza and football man'. And just in case we hadn't got the message, Cherry Blair once conspiratorially let us in on the secret that she could not get her husband to 'eat his broccoli'.

The perverse attitude the British have with food, is best seen in their relationship with junk food. We all know it is bad, and yet the vast majority still eat junk food. We know it is bad, and yet it is peddled on television. Ofcom, the industry regulator, finally decided something must be done, but rather than ban junk food commercials outright on TV, they pussyfooted about, bowed to industry pressure, and banned commercials at time when children may be watching, but then, somewhat perversely, decided to include cheese in this ban on junk food. [see We're cheesed off with junk claims]

The stupidity of the Ofcom rules is shown by the fact McDonald's cannot advertise burgers during children's programmes, but will be able to promote its restaurants.

Do we not care what our kids eat?

School children are fed on 35p a day. Following a campaign by Jamie Oliver, the ever-so-generous government has now upped this to 50p!

Planners exacerbate the situation, seeing superstores, boxes on the bypass, and a plethora of High Street chains and junk food takeaways as 'development', where every town is 'clone town', all looking the same. They ignore the local business which are falling by the wayside likes victims in a one-sided war. They ignore the drain of money out of the local economy. One is left with the stench of corruption, that backhanders are taking place, greasy palms being lined. Nowhere does this stench pervade the air more than in the towns of Aldershot and Farnborough, two towns destroyed by bad planning, both towns lie within the auspices of the Rotten Borough of Rushmoor.

Do the Brits have poor palates, is something wrong with our taste buds, or are we brainwashed by Big Business into consuming bad food?

The food industry would argue there is no such thing as bad food, just bad diets. That we are as a nation unhealthy with a growing obesity problem is not down to bad food, but down to the fact that we are a bunch of lazy fat bastards who don't get enough exercise. And they can find enough willing academics who if you give them enough money will jump to the piper's tune to reinforce this message

The problem is that not only is there bad food, but the Brits are gorging themselves senseless on it.

The solution Joanna Blythman would argue is very simple:

'British politicians simply need to get their heads and and tongues around one very clear and unequivocal public health message: Eat as little processed food as possible and base your diet on home-cooked meals, made from scratch from raw ingredients. But no government has the stomach for serving up this truth. It has become an alien message that the British no longer want to hear.'

Queen's Market at Upton Park in East London, a traditional East End street market, provides an excellent choice of fresh fruit and vegetables, as does nearby Green Street. The kids walk through on their way to school, pick up fruit to eat, do the same on their way home, their parents shop to produce a home-made dinner for the kids to eat after school. A market, the local mayor, in collusion with property developer St Modwen, is determined to destroy for a supermarket. Alton, a small market town in Hampshire, still has quality, independent food shops, in the summer, local fare is celebrated at the Alton Food Festival. The little Suffolk market town of Saxmundham said no to Tesco, and as a result local retailers are thriving. But these are little green oasis, the jewels in the crown, in an otherwise food desert.

Gourmet dinners on the menu for pupils, Lincolnshire Echo, 18 November 2006

Michael F Jacobson and Bruce Maxwell, What Are We Feeding Our Kids?, Workman Publishing, 1994

Corby Kummer, The Pleasures of Slow Food, The Ecologist, April 2004

Markets create twice as many jobs as supermarkets and food is half the price, New Economics Foundation, 22 May 2006

Jamie Oliver, Cook With Jamie: My Guide to Making You a Better Cook, Michael Joseph, 2006

Jay Rayner, The truth about school dinners: what happened when Jamie went home, The Observer, 25 June 2006

Helen Rumbelow, It's all talk and no action over school food, says Jamie Oliver, The Times, 26 July 2005

Gerard Seenan, Dinner ladies who lunch, The Guardian, 24 May 2003