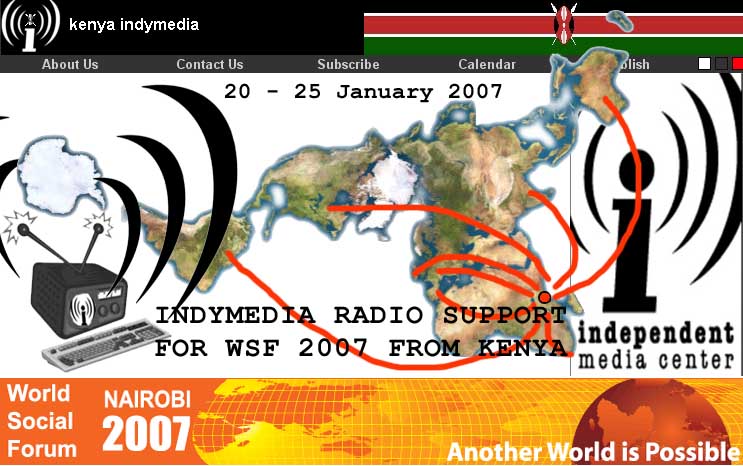 This project has taken off, with your help it will get a lot bigger: Turn on, Tune in, speak out

Several IMC members are traveling to Narobi, Kenya this month to support an Indymedia convergence during the seventh annual World Social Forum which runs January 20-25th. Media activists from Africa and around the world will be reporting in the World Social Forum, providing hands-on media production workshops, building two low-power radio stations in Kenya, and creating dialogue and cooperative production across borders.

Other IMC members are not traveling to Narobi but are staying at home to support the network by attempting to widen the discussion with the Global Listening Nodes project: a proposal to Syndicate content from different nodes in social centers and other alternative media outlets during the WSF and combine it with content from Nairobi also. A kind of global collaboration on both virtual and physical. Basically getting more social centres and other spaces to open up during WSF as local nodes around planet for people to go to to firstly listen to stuff live from kenya, but also maybe where they could have 2 way systems: being able to participate in forum without physically being there.

But the journey of the WSF has not been without its criticisms. Some claim that the Charter of Principles, which form the core of the WSF process, are not always adhered to with the result of alternative fora being created, as happened for the 2004 European Social Fora in London. Worse still is frustration with the entire social forum process, as happened at the 2002 Argentinian Social Forum because "Radical perspectives were not included within the forum's debate." But this year old and new African IMC´istas are working hard to attempt to take the WSF story to the next stage, and for that they are looking for ever more solidarity and collaboration.

How you can help : Tune in: ((radiolivre)) (((imc))) International Radio Show | inform your community | make a listening node | contribute views to IMC-Kenya | Publicise locally | get local radio station to restream | donate cash to the project | tell us what else needs to be done

The World Social Forum is an annual gathering of participants in social movements for global justice, timed to coincide with the World_Economic_Forum.

The World Economic Forum is a meeting of business and political leaders in Davos, Switzerland, which is converted into a military security zone during the meeting, making demonstrations and coverage by Independent Media nearly impossible. Participants at the World Economic Forum are overwhelming European or American and male; non-governmental organizations such as Friends of the Earth and Public Citizen have been excluded from meetings after raising concerns, and Greenpeace withdrew after finding the group uncooperative on issues such as climate change.

The World Social Forum is held in the southern hemisphere each year and largely made up of participants in social movements in response to the poverty, inequality, war, sexism, and state suppression generated by policies pushed by participants of the World Economic Forum, the World Trade Organization, and other forces of global capital.

Rallying around the call of "Another World Is Possible," the World Social Forum has placed social justice, gender equality, peace, and defense of the environment on the agenda of the world’s peoples. World Social Forums have collectively expanded the democratic spaces of those seeking concrete, progressive alternatives to imperialist globalization.

There have also been various other local Social Forums, European level, national level

This World Social Forum IMC will be focused on not only on reporting on the WSF, but on skill-sharing and solidarity between Indymedia and global justice activists. There will be workshops on web distribution of stories, audio production, radio station building, print publishing, silk screening, and consensus based decision-making. Another goal is to consolidate the energy of local activists in Kenya to resume and energize the formation of a permanent IMC in Kenya.

"Independent Media in Africa continues to be a challenge. While large parts of the populations in Africa still do not have access to democratic and independent media, they are lacking specifically access to more interactive media like the internet that enable not only to receive news but also to produce news globally. Thats why local, private and pirate radio stations or a free radio action and even small-scale newspapers form a strong force of independent media in many African countries. Devoted media activists maintain them. The WSF gives a great opportunity to continue networking between these local activists as much as discuss chances and possibilities to increase the use of the internet for networking and eventually producing more African news for within and beyond Africa," says Fabian, one of the organizers on the ground in Narobi. And so, trying to create free software alternatives of producing low-band web radio .

http://kenya.indymedia.org/ as the stories unfold.

http://www.globalexchange.org/tours/804.html
Global Exchange invites you to join our delegation to the WSF for a chance to learn about Kenya and Africa through the eyes of its people, grassroots organizations, and from activists joining us from all around the world.

http://wsf.amarc.org/
The World Association of the Community Radio Broadcasters (AMARC) will take an active part in the 7th edition of the WSF with the organisation of five workshops and a radiobraodcast that will be aired on the internet.

http://www.ms.dk/sw41603.asp
MS - Danish Association for International Co-operation - is a Danish NGO working to promote understanding and solidarity between people and, by co-operating across national and cultural boundaries, to contribute to sustainable global development and a just distribution of the earth's resources.

http://allafrica.com/stories/200701190948.html
While the official carrier, the Kenya Airways, reports full bookings to Nairobi over this period, the organisers of the World Social Forum (WSF) say many more people are streaming in by other airlines, road and even on foot.

http://www.ipsnews.net/news.asp?idnews=35874
WORLD SOCIAL FORUM-KENYA:
A Race to Leave Informal Settlements Behind:
'Marathon for Basic Rights: Another World is Possible Even for Slum Dwellers'.

http://www.trocaire.org/news/story.php?id=941
World Social Forum will open this weekend in Kenya

IRIN : UN office for the coordination of human rights

Global summit in Kenya to focus on Africa's plight

Kenya: - The Sky is the Limit!

Macharias journey: Kibera and a story of Hope
an article about the work Nick Macharia is doing in the slum of Kibera :